Fox, like a number of other coaches this spring, is taking an interpretation of an NCAA rule on NBA draft workouts and is getting involved in scheduling them.

"I'm doing just about all of it," Fox said. "I'm the one communicating with the GMs and scouts. It's a significant amount of time every day. I owe it to Nick and I'm fortunate that he trusts me."

The rule, NCAA Division I Bylaw 12.2.1.2, was interpreted as recently as last Thursday to clear up any misconception. The rule states that it is permissible for an institution to reserve a facility for its student athlete to work out for a team, as long as the coach is not present for the actual workout. A student's family and other individuals can attend as long as they are not "agents or acting on behalf of agents."

For years, underclassmen have been burned by misunderstanding the workout rules and end up sitting games the following season if they return. It happens when players don't realize they must pay in advance for workouts at NBA facilities. The only exception is the predraft camp, which has moved from Chicago to Orlando this June, and which the NBA pays for.

To combat this possible expense-related headache, coaches such as Fox are being proactive.

Fazekas can't do any workouts until Nevada's final exams are over this week. Fox said Fazekas would make a decision on whether to accept an invitation to go to Orlando in the next two weeks.

As far as workouts, Fox is attempting to bring teams into Reno so it doesn't cost Fazekas anything.

"I've heard the horror stories of players getting bad advice and then getting buried [with financial issues after not paying for workouts]," Fox said. "This way, I'll know exactly what's going on."

Fox said the NCAA has been good to work with as it explains what he can and can't do.

"For instance, if he went to a workout, can I go? I know I can't now. Can I go to Orlando? Yes, I can go there. But I know I can't even watch a workout here," Fox said. "Nick has been great and so has his family. They've been mature and cautious."

Fox isn't alone on this path.

Pitt coach Jamie Dixon has been calling around for junior center Aaron Gray, looking into the possibility of a workout in Pittsburgh for him. Gray isn't interested in flying all over the country for workouts and isn't keen on going to Orlando, either.

UCLA assistant Kerry Keating spent last week going around Los Angeles watching workouts to see how they are handled so he knows what to do for his sophomores Arron Afflalo and Jordan Farmar. Keating can't attend one of their workouts, but if one is set one up at Pauley Pavilion, Keating wants to be sure he does the right thing.

Meanwhile, the two Bruins sophomores must become part-time students before they can work out for NBA teams. Part of the aforementioned bylaw says that players can't work out for NBA clubs while still in school fulltime (although NBA teams can watch them work out during the college season). Farmar and Afflalo will become part-time on May 19; UCLA is on the quarter system and doesn't let out until June. It's worth monitoring, as going part-time could hurt their chances for regaining eligibility, as they now only have to pass two classes instead of three.

There isn't much of a buzz about Afflalo, but one is building for Farmar. Neither has completely ruled out Orlando, yet. Keating is looking at West Coast/L.A.-based workouts for both. If they were to go to the East Coast, "that's up to them. And they would have to pay for it."

Meanwhile, Cal sophomore Leon Powe is getting more of a hands-off approach from the Bears' coaching staff, as his mentor Bernard Ward handles his workouts. Powe worked out in the Los Angeles-area against UNLV's Louis Amundson last week and then also worked out for the Lakers. He has workouts scheduled with the hometown Warriors and nearby Kings in Sacramento. He has tentative flights next week to Portland and Phoenix that he would pay for in advance. 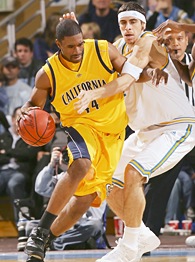 Powe said he wants no part of Orlando because "it's bad for the big men. It's too much of a show for the guards, coming down and shooting too many times. That won't do me any good."

Powe said he hasn't heard any "bad news" about his workouts and "nobody told me to go back to college. Right now I'm staying in [the draft]."

He's not relinquishing his amateur status yet by accepting money, but the fact that the Bears aren't directing everything from Berkeley is a sign that Powe is probably staying in the draft. You can start to see the shift depending on the influence. Texas isn't setting up workouts right now for P.J. Tucker and Daniel Gibson, although that doesn't mean they're definitely staying in yet. Villanova's Kyle Lowry reportedly is working out at the IMG Academy in Florida -- another indication he might stay in the draft.

"He knows he has to do it on his own," Cal coach Ben Braun said of Powe. "He has made good decisions and he's getting good feedback. But there's nothing going on here [in terms of setting the workouts up]."

The way it looks right now, how much a college coach is involved this spring might be a indication of whether there's a real chance the player will come back to school for next season.