The Big East breakup that was supposed to happen after the ACC lured three of its members away never happened.

The assumption that the league would last only five years after it then added five Conference USA teams to get to 16 also seems to have been overblown.

The first year of the new Big East, the largest conference in the country and only the second 16-team conference ever in Division I, was a rousing success. And with a pending rich TV contract with partners at ESPN/ABC and CBS, the league is looking like it might be the strongest it has ever been.

The Big East wrapped up its annual spring meetings in Florida on Wednesday and there are no signs the league is on the verge of any type of split. While there are some natural differences of opinion on scheduling, the conference tournament and recruiting among the 16 coaches, no one is even close to looking at a separation -- I-A football school or not.

"If we brought our presidents in and told them all that they could leave tomorrow with no obligations, they wouldn't leave and neither would any of the ADs," Big East commissioner Mike Tranghese said Thursday upon returning from Florida. "There is a renewed sense of optimism with the success we've had in football, basketball and the contract negotiations [for TV rights] that we're all excited about." 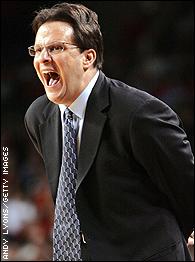 When the ACC took Miami, Virginia Tech and (a year later) Boston College, the Big East was left with only five schools that don't play I-A football (St. John's, Seton Hall, Providence, Villanova and Georgetown). The NCAA requires that a conference have six members stay together for five continuous years to maintain an automatic bid to the NCAA Tournament, so if those five had split off, they wouldn't have had an auto bid. The addition of Marquette and DePaul as part of the five-team group that came from C-USA, though, gave the league seven non-I-A football schools, which put them in position to leave after five seasons if there was discord.

"We didn't want anybody to be damaged, and that's why we required in the initial agreement five years," Tranghese said. "People were interpreting the five years as if to mean that was it for the conference. If someone wants to leave in 10 years, 12 years or 15 years, they can. But I don't think you'll ever see us visit this unless a group is going to come in and say they're going to leave. It's not on the agenda. Everybody in the league has a good taste of what happened this year."

The good vibe actually started with football, the sport the Big East was most criticized for when the league was reconfigured. West Virginia's win over Georgia in the Sugar Bowl in January was probably the most significant single victory for the conference this year.

"That had a lot to do with our perception," Tranghese said. "That [game] made everyone take a step back and say these guys are pretty good. Up until then, all we heard was criticism. The win gave us credibility and quieted the critics."

The Big East didn't win the national title in men's basketball, but it had two No. 1 seeds in Connecticut and Villanova and landed a record eight teams in the 65-team field. The biggest basketball buzz, though, came from the TV ratings. According to Tranghese, the conference title game between Pitt and Syracuse at Madison Square Garden was the most viewed conference title game (2.6 rating) on ESPN since the 1998 ACC championship game. The semifinal game between Syracuse and Georgetown drew a 1.5, the highest for a semifinal since 1996. Even the noon quarterfinal tipoff between Syracuse and Connecticut drew a 1.0, the highest-rated noon tourney game ever on ESPN.

The buzz extended to demand for tickets as well. Tranghese said the 12-team Big East tournament was the toughest ticket it has ever been. The league's coaches want all 16 teams in the event, but Tranghese said they'll have to take it up with their schools' presidents. No president currently is pushing it, so it will likely stay at 12 for the foreseeable future.

Tranghese said he can't talk about the next television contract, slated to begin in 2007-08, but it is anticipated to be the richest ever for the conference and will grant it a record number of exposures. There could be multiple national nights on ESPN as well as the weekend games on CBS. The conference tournament is exclusive to ESPN, with every game being televised. A number of coaches have discussed how impressed they were with the deal.

Collectively, the number of appearances on CBS and ESPN is supposed to be equal or better than what any other conference is receiving.

"This deal will stun a lot of people," Tranghese said.

The conference didn't officially vote on raising the number of conference games from 16 to 18 in 2007-08, but it is expected to be voted on by the athletic directors and presidents this summer and be in place in time for the new TV contract.

The magnitude of the new deal was hammered home at the meeting. The underlying message: If the league ever split and tried to make deals with the same TV partners, they wouldn't collectively add up to the one the 16-team Big East is receiving.

"When we started this, it was all about basic survival and to protect the current institutions," Tranghese said. "People assumed it wouldn't last. But after going through one year, the publicity and exposure everyone has received, no one wants to split."