The answer: "[A decision] has not been made," Lowe said Thursday. 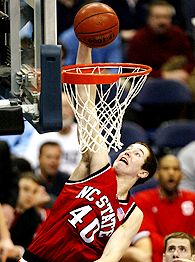 Practice is now just a week away and Lowe still has no idea if his 6-foot-10 big man, who would be the Wolfpack focal point inside, will be on the team, let alone begin practicing next Friday.

Brackman is considered to be one of the top pitching prospects in college baseball and, assuming he can stay healthy, projects to be better than Padres right-hander (and former Princeton center) Chris Young, who thrived this season after arriving in a trade from Texas. Dodgers journeyman left-hander Mark Hendrickson (Washington State) also is a former college (and NBA) big man.

Brackman was 4-0 with a 2.09 ERA as a freshman. He slumped to a 1-3 record with a 6.35 ERA last season as a sophomore, although he was affected by a stress fracture in his hip that he suffered during the basketball season and shut it down on April 21. The right-hander returned to the diamond over the summer, playing for the Cape Cod League's Orleans Cardinals and was 1-0 with a 1.06 ERA and a .140 BAA in six appearances, and was named the league's No. 2 pro prospect by Baseball America.

Brackman started out the fall semester working with the Wolfpack basketball coaches during individual instruction, but as soon as fall baseball started, he put away the high tops, grabbed his glove and spikes and headed to the diamond.