NEW YORK -- Well, New York, here is your chance to see St. John's, to gauge if this is a team you can rally around, can truly believe in this season as a potential postseason club.

Sure, it's not even Thanksgiving yet, but over the next two nights in their home arena, the Red Storm have an opportunity they never had in the previous two seasons under Norm Roberts. They have a chance to grab your attention while the Giants and Jets are still in the meat of their NFL seasons and the Knicks haven't been mathematically eliminated yet.

Texas is the only team that is ranked, but there are expectations at Maryland and Michigan State that both will be in the NCAA Tournament, too. Still, St. John's, which returns all five starters, albeit from a team that finished 5-11 in the Big East last season and missed the conference tournament for the second straight year, has a shot to win two games here. 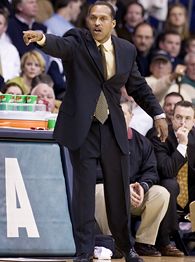 "This is real important for us to put St. John's back on the map," senior guard Daryll Hill said. "All the games are winnable."

Hill is from New York. He said watching other New York City kids play in the Big East tournament the past two seasons has been hard to swallow. He has a pulse on the city, or at least on the folks who follow hoops. He knows that they're waiting, watching and wondering whether this St. John's team is a real player after the Red Storm easily beat North Florida and Navy on campus last week in this event's first two rounds.

"Everyone wants to see us play against good teams, to see how we react and to see how we play," Hill said. "This is a great opportunity for us to do that. It'd be very good for us to come out of here, even if we're one out of two, because it could put St. John's on the map. That's the worst case. We're not thinking 0-and-2."

"I don't think it's make or break," Roberts said. "It's too early, but it's a great barometer. The guys want to play in the Garden. But some team will leave here with two losses, and that team can still be very good this season. We can't look at it as make or break. This is a chance, but we'll have other chances in the Big East."

The reality though, is that the Red Storm are the home team, so these are two high-profile home games in mid-November that they can't afford to let slip.

What happens these next two nights has nothing to do with the Big East, but it goes a long way in terms of perception, and the Red Storm need a dose of good news after the program had to dismiss guard Derwin Kitchen for academics. Kitchen was going to be a vital part of the Red Storm's offense and one of the team's top shooters, although the Red Storm are still pretty deep with Eugene Lawrence, Avery Patterson (who has presently supplanted Hill in the starting lineup), Hill and Larry Wright on the perimeter.

"It hurts us depthwise and he had a great feel for the game and a way to make others better and he could score the ball," Roberts said of Kitchen.

But Roberts isn't about to move Hill from off the bench, where he has been a calming influence so far. Hill, who has been nursing nagging knee injuries and doesn't always go with a full practice, doesn't mind the role.

The Red Storm already start two seniors -- Lamont Hamilton and Aaron Spears -- and a sophomore who seems like an upperclassman in Anthony Mason Jr. Having Hill off the bench offers even more experience.

"One of the big things for us is that our seniors have to play like seniors," Roberts said. "We have experience and they have to play that way. But that's easier said than done."

So this is it. St. John's has the stage. It's the Red Storm's time to seize the city's interest. The rest of the November-December schedule is light enough (only one road game, at Niagara) that if St. John's wins the next two, it has a shot to enter Big East play undefeated. By then, the Red Storm could be ranked and have a buzz behind them.

So are these meaningless games in November? Hardly. These are clearly two of the most important for any program until January.