LAS VEGAS -- Billy Donovan cracked a smile. The Florida head coach was fine. He was totally at ease in discussing the Gators' state of affairs as he walked toward his locker room at the Orleans Arena late Saturday night.

So, see? This wasn't March. It wasn't a conference tournament title game or the NCAA Tournament. Seriously, it wasn't. 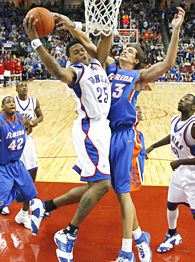 But didn't Kansas' fans storm the court? Storm a supposedly neutral court? And wasn't that a female KU fan holding the Las Vegas Invitational trophy above her head while she was getting a piggyback ride?

This was November, right?

Well, if you were here, you would have thought otherwise for the 2½ hours that Kansas and Florida played, albeit hardly flawless, one of the most emotionally charged November non-conference games.

Kansas won 82-80 in overtime in the finale of the predetermined Las Vegas Invitational. What it proved for both teams is worthy of a discussion. But on the surface the game itself should be first celebrated for its sheer enjoyment.

It would be hard to argue against Gonzaga's triple-overtime Maui Invitational semifinal victory over Michigan State last year. That game was one of those "wish you were there" kind of games. But the buildup was hardly comparable to this one with No. 1 Florida going against No. 12 Kansas -- still the choice by many to win the national title. It didn't matter that the Jayhawks had lost to Oral Roberts at home already and looked rather pedestrian in beating Ball State the previous night here, while Florida looked UNLV-like -- in the best of the Tark era -- in walloping Western Kentucky.

This was supposed to be the game prior to the 2007 conference season. And it was. It also was one of the most unique with the two teams playing at Phog Allen West as Kansas seemingly transported nearly 7,000 fans to Las Vegas for Thanksgiving weekend. There was a pep rally outside the Orleans Arena, which holds 8,500. Kansas brought its mascot, its cheerleaders and looked like it had spared many a turkey in Lawrence by coming here instead of staying home for the holiday.

Donovan made sure everyone knew Friday night that it would be a road game for the Gators against the Jayhawks. Remember, the Gators were playing Florida State in football in Tallahassee Saturday, too. Even if the football team was off the Gators would be hard-pressed to match KU's travel party.

Donovan said he has seen a "neutral court" like this "at the SEC tournament" in a reference to the Kentucky-advantage.

"It wasn't neutral and Billy will be the first to tell you that," Self said. "This was fabulous and the perfect size venue. We travel so well. It was a Maui atmosphere times four as far as the crowd."

As for the storming of the court, Self said, "obviously those weren't our students. That wouldn't happen at home." He was talking in jest but the reality is the Jayhawks didn't mind letting loose after winning this game.

It was only 24 hours earlier that Self ripped into his sophomore class -- and that included Julian Wright and Brandon Rush. He wasn't satisfied with their play to this point and he wasn't going to protect them.

"We said a lot of things [Friday night] and most weren't flattering," Self said. "It was the truth. We weren't playing together and we were individuals on an island. The body language stunk. We looked like a team that had guys who can really play and [against Ball State] we didn't look like that." 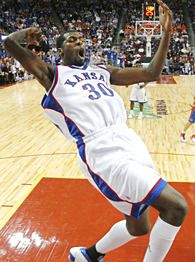 Wright was sensational Saturday night, despite a few mental lapses -- like fouling Florida's Corey Brewer on the baseline with 10 seconds left after he had scored to put him at the line. Brewer missed the free throw, but the Gators tapped it back out to Taurean Green who missed a shot only to have Joakim Noah beat out teammate Al Horford for the game-tying tip-in to send the game into overtime.

That one foul didn't dare overshadow Wright's stellar night of 21 points (17 in the first half) and 10 boards. Rush had his moments too where he made a huge 3-pointer, a layup to tie the game in overtime but also turned softly into a triple trap (KU's perspective) and got stripped by Horford.

Wright said the Jayhawks had been telegraphing the offense and had not been aggressive prior to Saturday.

"We just kept attacking and win or lose we knew we had to put ourselves in position to attack," Wright said. "It shouldn't take him yelling at us at halftime or whatever for us to try harder."

Kansas was lost Friday night by Self's accounts, but had found itself Saturday. Self wasn't even that disappointed that the game had gone into overtime. The players were mad, but not frustrated.

The poise, notably by freshman Darrell Arthur who made a bucket and calmly made two free throws in overtime, showed Kansas had matured quite a bit in 24 hours.

As for the Gators, well, don't cry for them because no one on Florida is tearing up.

The Gators didn't play well in the first half and still were only down six. They had foul problems to their big three -- Corey Brewer, Horford and Noah -- and still were in position to make a run. And they did, clawing back to tie the game and send it into overtime where they were one shot away from taking this game.

"Kansas played better than us but I never saw a level of frustration," Donovan said. "I told these guys that because we won the national championship there were going to be games where we couldn't match the energy at the beginning of the game. But it's a 40-minute game.

"I don't want to take anything away from Kansas but we were right there, giving up 57 percent in the second half, right there [to win]," Donovan said. "That shows a lot about the internal makeup of the game. Jo and Al rip the ball right out of Rush's hands, we tip it in and we find a way to [force overtime]."

The players, notably Green and Noah, weren't pleased with the team concept by the Gators Saturday. But they were hardly despondent. Donovan's main concern was the NBA-like schedule recently where the Gators played seven games in 15 days and its effect on loosening their defensive intensity.

"But it was a terrific game for us," Donovan said.

Remember, this is the losing coach here.

"Our guys have the will to win as good as any team I've coached," Donovan said.

And that's why Florida will be fine. So, too, will Kansas now that it located its passion and purpose.

And college basketball got a rare holiday treat with a game that lived up to its anticipation on the court as well as exceeded it in the stands with an electric buzz, reverberating throughout every corner of this arena.

What's next on the agenda? ACC-Big Ten Challenge? Duke-Gonzaga? Ohio State-Florida? It might be hard to duplicate this one that ended at 1:24 a.m. on the East Coast, at least until conference play if not maybe March.

Four months from now the games will matter more and the postgame reactions in the locker rooms won't be nearly as constructively analytical.

But in the end it will be hard to top a late November Saturday night in Vegas because this one will be remembered fondly for a long time.