Honestly, if you were watching No. 1 Ohio State for the first 20 minutes against No. 6 North Carolina on Wednesday night, you had to ask yourself if this Ohio State team needed another player, even a potential superstar in 7-foot Greg Oden, to win at one of the loudest and most difficult road stops in the country. 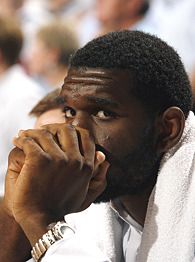 But then, reality hit Ohio State, and as the Tar Heels continued to go inside in turning a four-point halftime deficit into a 98-89 victory in the headliner of the ACC/Big Ten Challenge, you see the difference Oden would make for the Buckeyes. You can visualize that once Oden is cleared sometime around New Year's Day to play after sitting out the fall semester following right wrist surgery to repair ligament damage, the Buckeyes will join North Carolina, Florida, Kansas, UCLA and Pitt as one of the few favorites to win the national championship.

"They've got a big-time team and when Greg Oden gets back and is playing for them, they're going to be a heck of a team," Tar Heels coach Roy Williams said.

"The encouraging thing for us is that we're waiting on Greg," said Ohio State counterpart Thad Matta, whose star freshman center was on the bench wearing a white shirt and black slacks, with a white towel draped around his neck. "Where they got us [Wednesday night] are in areas where he's going to help us a lot."

Freshman point guard Tywon Lawson, who like his Tar Heel classmates is familiar with Oden from the summer and all-star game circuits, said bluntly: "They were missing that tough inside presence, and if he were there when we'd go in the lane, he would block all our shots."

UNC sophomore forward Tyler Hansbrough, named preseason player of the year by a number of media outlets, scored 14 of his 21 points in the second half by finally attacking the makeshift Buckeye post play. He also had a career-high 14 rebounds, but what if Hansbrough had Oden to contend with?

"You guys know how good Oden is," he said. "But at the same time you can't look at maybe he was there or not. We still played Ohio State."

It's not December yet, at least for another day, but the Buckeyes' take-that attitude on display at the Smith Center, their 3-point shooting (8-for-13 in the first half, 12-for-their-first-19, 13-for-26 for the game) and overall offensive talent at four of the five positions save Oden's center spot (held for now by Matt Terwilliger and Othello Hunter), was certainly a wake-up call for anyone who doubted the team to this point (can't see the raised hand here).

It was easy, and maybe too simplistic, to question the Buckeyes (6-1) because they hadn't left Columbus for their first six games, where they beat programs from mid- to low-major conferences, the best of the bunch being Loyola of Illinois, Kent State and Youngstown State).

The Ohio State team for all to see at the Smith Center, the one that will face Valparaiso and Cleveland State without Oden, is awfully good. Ron Lewis, a transfer from Bowling Green, is emerging as a high-major stud after finishing with 30 points. Jamar Butler (five assists and no turnovers) is as steady a lead guard. Ivan Harris, the senior who is one of three remaining Jim O'Brien recruits, is as deft a 3-point threat as any other Buckeyel he scored 17 points and was 5-for-8 from 3-point range.

And we haven't even named the freshmen yet. Daequan Cook (14), Mike Conley Jr. (eight assists and three turnovers) and David Lighty (2-for-3 on 3s) weren't fazed at all by the raucous baby blue-clad Dean Dome crowd.

"It was impressive the way they knocked down big-time shots," Carolina freshman Wayne Ellington said of the Buckeyes' 10-point first-half lead. "They played with great confidence. They're a big-time basketball team."

Matta's mind-set was to attack from the outset; his Buckeyes looked fearless. Sure, the Tar Heels swung this game back late by going right at the Buckeyes via the post in the second half, shooting 65.5 percent (19 of 29 overall, 4 of 8 on 3s). So, if the game taught the Buckeyes one thing, it's that their defense still isn't there yet. But it's coming along.

Oden's projected return date officially remains Jan. 1, but don't think for a second that he's definitely out for all of December's games -- against Cincinnati on the 16th in his hometown of Indianapolis; against Iowa State on the 19th; at Florida on the 23rd; or against Coppin State on Dec. 30.

"I have no idea," Harris said when asked about an Oden return date, "but when he comes back we'll be a complete team. ... North Carolina is a tough team to play and this was our first tough matchup, but I believe we can hang with anybody in the country."

The Tar Heels felt the same way after winning for the fifth time in six games. They were in need of some sort of pick-me-up after still feeling the fallout of a loss to Gonzaga last week in the semifinals of the NIT Season Tip-Off.

"We went to New York expecting to win, and so we needed this second half [Wednesday] to take it right back at them," Lawson said. "But we learned a lot about our defense. We have to stop teams from driving and kicking it out."

"We had to match their intensity," Hansbrough added. "We had to fight through it and it was a challenge for us. We learned we've got to play a full 40 minutes. Personally, I needed this. I was disappointed with the Gonzaga game and have a chip on my shoulder."

Hansbrough scored nine points in that loss, making a mere two shots in five attempts. He was 8-for-16 Wednesday and didn't miss any of his five second-half attempts.

"I feel like I regained my intensity, but I still keep Gonzaga on my mind," he said.

Could we see these teams meet again, say sometime in late March, maybe in Atlanta?

"The way we play isn't going to change," Lewis said. "We're going to play hard with or without Oden. He's not here. So, we go out and play basketball. One person doesn't change the game."

Still, just imagine when he does play how good Ohio State can be this season.

"We'll see," Ellington said. "Greg is a great player, and he'll do nothing but contribute to Ohio State."