CHAPEL HILL, N.C. -- Give Tyler Hansbrough credit for being a young man who knows who he is and what makes him tick. 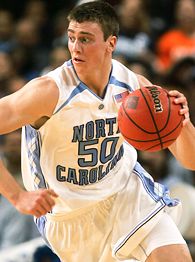 There is a certain Mark Twain character in Hansbrough. He is the small-town kid who made himself into a big-time college -- and possible NBA -- player. But he never seemed to leave Poplar Bluff, Mo., behind, even when he went to school at what appeared to be a big city to him, Chapel Hill.

Hansbrough was a preseason choice by many, including here, for national Player of the Year. Because it's only late January, he still could win the award, but the odds are starting to be stacked against him with the play of Wisconsin's Alando Tucker and Texas' Kevin Durant overshadowing his efforts. And, certainly, the addition of Brandan Wright gave North Carolina star power and more options inside rather than relying on Hansbrough as much as the Tar Heels did a season ago. Still, his numbers haven't changed much; he's averaging 18.4 points this season to 18.9 a year ago and 8.1 rebounds this season to 7.8 a year ago. If there is one difference, it is his poor play in two games -- nine points in a loss to Gonzaga (and Josh Heytvelt) and seven in a win over Kentucky (and Randolph Morris) -- that seems to have knocked him down a peg, fairly or not, in the Player of the Year chase.

Still, when I sat down with him earlier this season for a "College GameDay" feature "Livin' the Life" (which will air Saturday night prior to the Georgia Tech game), Hansbrough did share a bit about what makes him who he is midway through his sophomore season.

He defines himself as a hard worker, which shouldn't be a surprise. Opposing coaches say that Hansbrough plays hard on every possession and not just a few minutes at a time. He said he's laid-back off the court, which doesn't seem far-fetched at all either. A year ago, Hansbrough kept to himself. It took awhile to open his shell, for his teammates to get him to laugh a bit more.

But it took a year away from his family to really allow Hansbrough to grow. That sounds pretty normal for anyone going from freshman to sophomore year. But we in the media sometimes forget that there is a natural maturation process. When you see players such as Durant and Ohio State's Greg Oden, it's easy to assume that every freshman should have no issues adapting.

"It was really hard being away from my brothers, my mom and my dad who I had been with my whole life," Hansbrough said. "I was halfway across the country and I got homesick a little bit and then I got adjusted and found that this is a great place and I really enjoy it here."

Hansbrough said he didn't mind being pushed by his high school -- and now his college coach. The primary reason is that he understands he doesn't have natural athletic talent; he needs to make his way on his own by bullying his way to the basket and scrapping for every loose ball.

"It's one of my assets, it's one of the things that people look at," Hansbrough said. "Being undersized [at 6-7], some people say you've got to work hard to make up for it [lack of athleticism]."

But Hansbrough's best quality isn't his work ethic or his power game. It's that this Carolina staple of the past two seasons truly knows what he wants to do. Give him an off day when he could be anywhere in the country and there's no question where he would choose.

"It would be in Poplar Bluff on a lake, on my friend's lake, which is like a bigger pond and I would be fishing with my friends, just us out there, goofing around, catching fish," Hansbrough said. "That's what I would do. It's really relaxing, to have a fun time and catch up with a lot of things."

I mean how Tom Sawyer and Huck Finn is that?

"There's the pond, and you and your friends and there's not really many people around," Hansbrough said. "You get to spend time with some people you enjoy with no other distractions."

How would Hansbrough compare that kind of tranquility, that serene setting to the crazed atmosphere in the paint in a sold-out Smith Center?
"It's the total opposite," Hansbrough said. "Everybody is real tense, everybody is screaming in your face, and it's really a lot of pressure."

How does he handle the pressure?
"I think well and when the pressure isn't there I don't think I handle it as well, so I would say I'm a pressure player," Hansbrough said.

And that's why Hansbrough's favorite play isn't a dunk or a 3-point shot. It's a scrum, and the toughest one who goes into it gets the ball.

"The play I like the most is when the ball is on the floor and you have five guys and everybody's diving in there and you have one aggressive guy that goes in there harder and gets the ball," Hansbrough said. "That's my favorite play because it says something about the guy going in there against all those guys, taking a chance of getting hit in the face or something like that."

How often is Hansbrough that guy?
"I would say that I'm that guy a lot," he said.
"I'd say about after every game I have a little bruise that pops up out of nowhere and I'm like 'man, where did this thing come from?'"

And that's why Hansbrough loves college ball and doesn't see himself leaving anytime soon. How long does he want to be at Carolina?
"Four years,'' he said. "I love this place."

What's not to love with the alumni list being a who's who in the NBA?

How often does Hansbrough look up at the banners of names like Jordan or the national championship banners, especially the ones from 1982, '93 and 2005?
"I would say a lot. I mean it's hard to go a day without at least glancing at them and looking at them," Hansbrough said. "I'm pretty sure everyone on our team glances at them.
"It would mean a lot more [to have a championship banner rather than a jersey banner]. That's something a lot of players will never have in their college careers. I would say to have a national championship banner hanging up there would be a goal that we set out during the summer to achieve and it would just be recognition of all the hard work we have done."