LAWRENCE, Kan. -- Texas freshman Kevin Durant is the story in the Big 12. Heck, he might be the headline in the country.

But Durant's not on the best team in the conference and do we dare say that he's got some competition for Big 12 player of the year midway through the conference season? 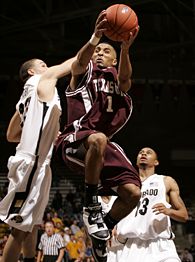 Texas A&M and the Aggies' senior point guard Acie Law IV are making sure the rest of the country understands that there is plenty more to discuss in this league.

The Aggies' crawled back from 11 down midway through the second half, going on a 17-4 run to close a game that was capped off by a dagger of a 3-pointer from the lefty Law over Brandon Rush. The 69-66 A&M victory served notice the Aggies are the team to beat in the Big 12, not Kansas.

The win over the Jayhawks was historic for Texas A&M, which became the first team from the Big 12 South (Baylor, Oklahoma, Oklahoma State, Texas, Texas A&M, Texas Tech) to win at Phog Allen Fieldhouse. Better yet, this is the first Aggie team to ever beat KU in 11 previous meetings.

As for Law, well, even though he doesn't rack up the points like Durant, doesn't have the star power, the 30-plus point, 20-plus rebound games, he's on an MVP-type tear.

Law scored 23 points (including the mighty huge trey), grabbed seven rebounds, recorded two steals (to go along with two turnovers) and was 4-of-5 at the line. He entered Saturday night's game averaging 19.4 points in the previous eight.

Gillispie said he was thrilled that Saturday night's game highlighted Law to the rest of the country. He said Law has been healthy the past two months, something that wasn't necessarily the case earlier in the season.

The Aggies didn't have that signature win prior to Saturday. They had been close, with losses in their first road game at LSU, back when the Tigers were playing their best basketball of the season. Then in the same week, A&M fell by three to UCLA in Anaheim. The only other loss came last week by a deuce at Texas Tech.

Law said he still sees UCLA's Darren Collison going into the lane and finishing after he bit on a fake.

Since the loss to the Bruins, the Aggies are quite a different squad. Sure, they are still the top defensive team in the Big 12 in nearly every category, but their offense and their overall execution, as well as their poise, are quite a good watch.

Despite conflicting comments after the game by the Aggies, fouling Kansas' Sasha Kaun was a brilliant move with 1:26 remaining and the Aggies down three points. Kaun, a 53.3 percent free-throw shooter, missed the front end of a one-and-one.

Senior Antanas Kavaliauskas, who Gillispie stuck with despite foul trouble all night, converted a three-point play on the ensuing possession to tie the game.

On the Kaun foul, Law said the plan was to get Kaun to the line. Gillispie played coy and said the Aggies were just trying to keep him and others from catching the ball. Marlon Pompey, who committed the foul by getting tangled up with Kaun after taking him down earlier up court on a no-call, said he had no idea what Kaun was shooting at the line and didn't intend to foul.

In hindsight, though, Gillispie didn't argue that the foul helped.

Kansas' Julian Wright converted a scoop layup to give Kansas its last lead of the night at 66-64. That set up Law's 3-pointer with 23.9 remaining.

Law clearly was aware of the Aggies' inability to win one of the headline games on the schedule.

"A lot of people were saying we couldn't win the big one and we let games slip away."

Because of the Big 12's unbalanced scheduling, Kansas had a huge advantage by getting all three supposed contenders (Texas A&M, Oklahoma State and Texas) at home without having to play a return game. So, far, the Jayhawks split the first two with Texas remaining to close the regular season. The Aggies and Jayhawks both lost at Texas Tech. But with Texas' loss at home to Kansas State, coupled with the Aggies' win over KU, Texas A&M is alone in first in the conference, a game ahead of KU, Texas and Kansas State.

Up next for A&M is a big rivalry game with Texas on Monday (ESPN, 9 ET) in College Station.

With that game also on national TV, Law is savvy enough to know these two games in three days could put the Aggies on the national map. Yes, they came into Lawrence ranked No. 8, but seriously, did anyone look at them as a legitimate threat to win the title?

"We looked at our team as having a chance to win it all," Law said. Now the tough chore is completing the stretch with a win over the Longhorns, which Law said should be quite a challenge.

"It's going to be tough, he's Mr. Superstar," Law said of Durant. "I really enjoy watching him play. We'll put all five on Durant. He's a great player and I have no idea how we're going to do it."

The Aggies don't have much time to celebrate this one. You could say they did their share after the game, bouncing around at midcourt on the oversized Jayhawk logo. A few fans booed the celebration, which probably was the reason that Law quickly apologized after the game, saying that the Aggies have class and that it was a case of being a bit overzealous with the win.

It's hard to criticize them. The Aggies deserved to let loose. They just conquered Kansas in what possibly could be the first stage toward winning the Big 12. There's also a possible No. 2 seed in the national tournament on the horizon. And Law clearly deserves to be in the conversation with Durant for Big 12 Player of the Year if he continues to play like he did Saturday night and if he also keeps the Aggies in first place over the final month of the season.

Now that would be headline-making material.