AUSTIN, Texas -- Texas coach Rick Barnes walked into a euphoric Longhorns locker room and let his team know just where it stands in the Big 12.

"We're one game away from winning the Big 12," Barnes told his team after Texas outlasted rival Texas A&M 98-96 in double-overtime at the Erwin Center Wednesday night. "We can go to Kansas and win the Big 12 outright. Why not us?"

Indeed, why not Texas?

The Longhorns are on the verge of pulling off one of the more surprising story lines of the season. If Texas (12-3 Big 12, 22-7 overall) wins at Kansas (13-2, 26-4) Saturday -- of course, still quite a tall order -- then the Longhorns would win the Big 12 and be the No. 1 seed in the conference tournament next week in Oklahoma City.

Texas A&M (12-3, 24-5) hosts Missouri and must root for rival Texas to beat Kansas to share the title. If the three teams are tied, then Texas wins the tiebreaker by virtue of a better record against the South Division teams than A&M, according to the Longhorns. (The teams split their games and both, in this scenario, would have won at Kansas in the only meeting. Texas has two South Division losses, though, while the Aggies have three).

"Coach always said we could do it, and now we're one game away," Texas freshman Damion James said. "We could be the youngest team ever to win a Big 12 championship."

Sure, Texas has the nation's most talented player in freshman Kevin Durant, and perhaps the top freshman point guard in D.J. Augustin, but who seriously thought the Longhorns could win the Big 12?

Well, Barnes did, as soon as the Longhorns lost at A&M on Feb. 5. Barnes looked at the schedule and saw the Horns had a six-game stretch of Iowa State, Oklahoma State, at Baylor, Texas Tech, at Oklahoma and against A&M before the trip to Kansas. He saw the potential for a run of six straight leading up to KU.

Now, here they are, just where he thought the Longhorns could be, with a little help along the way from Texas Tech, which stunned the Aggies two games after A&M beat the Longhorns.

"I told our guys we can control our own destiny," Barnes said of his speech after the loss at A&M. "But I said, 'We're not going to do it until we guard better,' and from that point on our defense was much better.

"I don't know what people thought about us prior to the season," Barnes said. "But we had the least amount of experience coming back of any power-conference team. We could have changed our schedule and stayed home, but we went on the road and tested our guys."

Texas, which starts four freshmen -- Durant, Augustin, James and Justin Mason -- along with sophomore guard A.J. Abrams, played and lost games to Michigan State in New York, Gonzaga in Phoenix, escaped with an overtime win over LSU in Houston when the Tigers were relevant, lost in overtime at Tennessee and, fresh off a triple-overtime loss at Oklahoma State in the league, went to Philadelphia and lost at Villanova.

Now, after Wednesday night, it's now hard to argue against the Texas freshmen class being just as good as the hailed classes at Ohio State and North Carolina.

Durant scored 30 points and grabbed 16 boards and made a 3-pointer with 20 seconds left in regulation that he later said he thought ended the game when it put Texas up 76-72. Durant ended up making 10 of 13 free throws, proving that he can be counted on all over the court. Meanwhile, Augustin was just as money, finishing with 25 points, seven assists and only two turnovers in 48 minutes. James wasn't a bad third option, either, with 22 points, nine boards and two blocks.

"Coming into the season, we knew were as good as [the other freshmen classes]," Durant said. "We showed we've got the best freshmen class in the country."

That's not a dismissal of Greg Oden, Mike Conley and Daequon Cook of Ohio State or Ty Lawson, Brandan Wright and Co. at North Carolina. It's just that the Longhorns are ready to pronounce themselves -- at the very least -- on equal footing, if you haven't noticed.

As for the top player in the Big 12, though, that argument is not closed. Both teams couldn't help but praise both Durant and Acie Law's candidacies for that award. 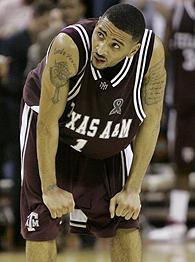 Law hit a high-arcing 3-pointer over Durant to tie the game with 1.4 seconds left in regulation. Barnes said he wanted the Longhorns to foul prior to the shot, but that plan wasn't executed. What ultimately was was a tougher 3-pointer than the trey Law hit over Brandon Rush to beat Kansas in Lawrence.

Durant said he thought he tipped the shot.

"I knew he'd do something crazy like that," Durant said of Law, the senior who finished with 33 points while playing all 50 minutes.

"When I got the ball I had to put as much arc on it as I could, because I knew he would contest it," Law said of Durant.

Law also made a 3 late in the first overtime that tied the game and helped send it to a second extra session.

Barnes said after the game he would have no issue with co-players of the year in the league and said that Law's performance Wednesday was one of the best he's ever seen. Law said he would be honored to win it, or share it with Durant, and even said he's OK if Durant wins the award.

Texas A&M coach Billy Gillispie was noncommittal, saying there was still another game to play, but he did say he anticipates being emotional Saturday night when Law finishes his home career. Law was on the squad a year prior to Gillispie's arrival when the Aggies went 0-16 in the Big 12. Barnes said he's seen Law mature and grow as a player. Gillispie can't put into words how much Law has meant to the school.

"I cry like a baby and just thinking about him playing his last game at home will make me cry," Gillispie said. "Only time will tell how important he was to this program. I know he's been infinitely important to the program and it will grow as time grows on."

In the meantime, Law said he has no problem rooting for the Aggies' archrival against Kansas, so A&M can have a piece of the Big 12 crown, too.

Kansas probably was rooting for Texas to knock off the Aggies so the Jayhawks could win the league all by themselves, but they may want to be careful what they wish for after Wednesday night.

Good enough to win the Big 12? We'll find out Saturday.