AUSTIN, Texas -- The young woman can't stop shaking. And, no, it isn't because of the light breeze on this overcast yet 70-plus-degree late February day.

It is because of Kevin Durant.

Freshman Ali Menke has just had her shirt signed by Durant -- nominally a classmate of hers at Texas, but more basketball royalty in this town -- and her hands are trembling. She's not alone in her excitement. Hundreds of other students dressed in burnt orange are in line three hours before the tip-off against archrival Texas A&M, and Durant, before what could be his final home game in his brief but spectacular Longhorns career, has decided to spend 15 minutes with the masses.

"It's the VY mystique," yells a young man, referencing former Texas quarterback Vince Young, who led the Longhorns to a national title in football in the 2005 season. 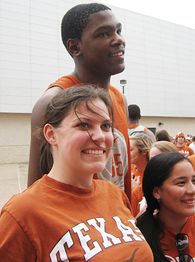 Junior Michael Landers is having a hard time even standing next to Durant as the Longhorns star tosses a football around with some of the students and a teammate, freshman center Dexter Pittman.

While Durant is 6-foot-9, he's slender and soft-spoken, and is decked out in a practice tank top, shorts, black socks and sneakers. He gives off an image that's anything but unapproachable, but Landers and other students still can't bring themselves to approach him.

"It's too intimidating to come up to him in the cafeteria," Landers says.

As Durant moves through the line, he is handed cell phones to say "hi" to the students' mothers. Someone runs up from the back of the line pleading Durant to engage the students who have wrapped around the upper concourse of the Erwin Center. One male tells a female friend to "get in there, push in there," as she attempts to get her shirt signed, too. There isn't a scrum, but the thirst to be near Durant is palpable.

"You should see it on the road," says fifth-year senior Ryan Clark. "I've been to every game, every one, all 31, including exhibitions, and he's just as big a superstar on the road as he is here at home."

Clark is so dedicated to Horns hoops that he says if Durant comes back for his sophomore season, then he'll come up with a reason to return for his sixth.

Then, without cue, Durant decides to head inside. He jogs. The students snap photos. They cheer. They can't believe they just got 15 minutes with their hero. There was no cape and he didn't leave his feet, but he still left his mark.

The giddy students don't chant for Durant to stay one more season as a Horn. They're greedy.

Shadowing Durant all day, from pregame through the game and then seeing him finish the night off before heading home, provided a glimpse into one of the most unique player-school relationships you'll see in college basketball.

The reverence Durant receives is one typically reserved for heads of state, not college freshmen. It's a complete love affair, fueled by the school's passion for this exceedingly talented and versatile player, and by Durant's willingness to accept the love and give something back.

On the court, he's like any other Longhorn, except harder-working. By the time a reporter settles in for the team's 4 p.m. shootaround, Durant has already put in 30 minutes on the court. He works on his shooting with assistant coach Russell Springmann, starting in close, moving back to 15 feet, and then back to the college and NBA 3-point lines. Durant has to make three in a row from seven different spots around the arc before they are finished.

During the full team workout, Durant is attentive, but completely relaxed. He occasionally finds himself reaching up to grab the net while standing flat-footed, his arms pulling down on the twine as if he were the '70s children's toy Stretch Armstrong, just limbering up for the evening's events. He pulls on his tank top. He yawns, but not from disinterest.

When the shootaround is over, Durant shares some laughs with his teammates, playfully tossing the ball around and even whipping it around with Pittman, prompting assistant Ken McDonald to remind them they don't want to pop any fingers on game day. Durant then hurls some half-court and full-court shots. Just a relaxed 18-year-old messing around.

As soon as he walks off the court, though, he's no longer just another guy on the team. Not everyone has the dance team and cheerleaders clapping and snapping photos of them on the way to the locker room. No one else has hundreds of students waiting outside, hoping to spend just a couple of minutes in his presence.

Game time drags ever closer and Durant is getting fidgety. He's already eaten a pregame meal of fried shrimp, spaghetti and meatballs, green beans and salad. Now he's wandering with Pittman through the building. He stops in the weight room and hops on the scale.

Durant then heads up to the practice gym to see if anyone is playing. He spots a former manager, George Rodman, chitchats with him, and then sits down to text message for a few minutes. Then he's up again and heads down the stairs straight for the team lounge.

The lights in the lounge are off. One teammate is snoring. "Seinfeld" is showing on the flat screen. Durant goes right to a computer, calls up myspace.com and starts communicating with friends. He stays there in the near-darkness, the only light coming from the computer and the TV, for nearly 45 minutes.

At 6:23 p.m., still nearly 90 minutes before tip-off, Durant gets a visit from his godfather, Taras Brown, and a friend, Willis Ware. Brown, who coached Durant in AAU, has never been to a game in Austin. Of course, he couldn't miss what could be Durant's last one.

Prior to every game, Durant text messages Brown, asking him what he needs to work on in that game. On Wednesday, they have the conversation in person. Durant, partially dressed in his uniform shorts but no top, sits down with Brown in a leather seat for the pregame scouting talk. Brown, who says he has seen nearly every Texas game from his home in Maryland, wants Durant to get to the line 10 times. He says Durant wasn't aggressive enough when Texas lost at Texas A&M earlier in the month.

"Hopefully, he'll put on a good show," Brown says as Durant heads back into the locker room to finish getting dressed.

At 6:54 p.m., Durant is ready to head down to the floor. He is the only player handed a basketball by a Texas official to sign as he walks down the ramp from the practice facility to the court. Fans, administrators and security personnel are cheering. They are taking pictures on cameras and phones. Just before he gets to the edge of the court, a fireman holds out a program for Durant to sign. He hasn't said no yet.

Durant goes through warm-ups, mostly shooting 3s. Students who have flooded both end sections cheer his every dribble. It likely is not a mistake that he is the last to be introduced before the game, and receives the loudest ovation, by far. There's an anticipation in the building. It feels like everyone has come to see him. Even one of the game's referees, Mike Wood, said earlier in the day that he was looking forward to watching Durant play for the first time in person. Who wouldn't?

Finally, it's showtime. Durant draws a charge within the first two minutes on A&M's bruising senior forward Antonas Kavaliauskas. He then buries a 3-pointer two possessions later on his way to scoring the Longhorns' first five points. The Aggies use three different players on Durant -- Kavaliauskas, the rugged Marlon Pompey and even point guard Acie Law once -- as they experiment with a triangle-and-two on Durant and point guard D.J. Augustin.

Durant takes a seat with 8:21 left in the first half, already with nine points. He's back less than 30 seconds later and soon gives Texas a 28-27 lead by nailing another 3-pointer. He gets the crowd going by waving his arms. He closes the first half by actually missing a spin move to the hoop, but Damion James is there for a follow layup to give Texas a 43-36 lead. Durant pumps his fists, exhorting his teammates and the fans as he races off the court.

The second half opens with a slam, sending the crowd -- the first true sellout of the season -- into a state of delirium. In the final 20 seconds, with Texas clinging to a one-point lead, Durant drills a 3 late in the shot clock to give the Horns a 76-72 lead.

"I thought the game was over," Durant said later.

It isn't over because the Aggies hit a 3-pointer to pull within one, and then after two free throws by Augustin give Texas a three-point lead, Law nails one of the toughest 3-pointers you'll see anywhere this season, a rainmaker that just clears Durant's outstretched arm on release. Overtime.

Despite more Law heroics in the first OT, the Horns survive and win 98-96 in a second extra session. Durant makes six of eight free throws in the overtimes, getting to the line a total of 13 times to satisfy Brown's request. He finishes with 30 points, 16 boards, three blocks, a steal and just one turnover in 49 intense minutes. It's his eighth 30-point game this season, all in Big 12 play. Prior to this season, there had been a total of nine 30-point games by freshmen in Big 12 conference history.

After the victory, the team and staff go to midcourt and hold up their fingers in a horn salute while the whole building sings "Eyes of Texas." Durant abides. He doesn't know the words. As soon as the song ends, the chant for "one more year" begins.

Durant stops for TV interviews and then is followed by a fleet of cameramen more befitting Brangelina. There are signs as he runs off the court, one unfurled that says, "Kevin is our National Player of the Year." Photos are being snapped as security officials and camera crews surround him. He keeps going, up the ramp, as fans scream at him and capture the moment for themselves on their cell phones' cameras.

After a postgame speech from Texas coach Rick Barnes, Durant greets friends and even more boosters, deals with the usual horde of media and then finally settles back in the players' lounge. He sits in the corner, the last player left in the locker room, and begins text messaging his friends. It is now 11:35 p.m. and Durant's day is still not over. Waiting outside, unbeknownst to him, are even more fans, hoping to catch one more glimpse of their chosen one, the star who has graced them with his presence, even if it's just for one season.