So, after all the chatter and the discussion and the analyzing, there actually was no race at all for national player of the year.

Sure, the hardware hasn't begun to be doled out just yet. The voting for the Oscar Robertson, Wooden, Naismith, AP and Rupp awards still is not finalized. Yet there doesn't seem to be even a chase, let alone a race.

Texas coach Rick Barnes was right from the beginning of the season, when he boldly showed up at Big 12 media day with a freshman -- something Big 12 publicists said at the time never had happened before in a major conference. The Texas coach proudly proclaimed that he had the best player in the country.

You know what? He was right.

The Adam Morrison-J.J. Redick daily debate of a year ago was a great story, especially as they tussled for the national scoring lead. And, for a spell this season, there appeared to be some sort of competition between Durant and Wisconsin's Alando Tucker. But in the past month, that turned into the tortoise and the hare, and you can guess which one is which. 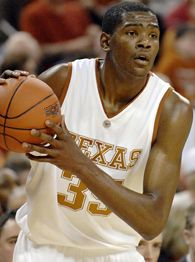 "Ask any college coach in the country, 'Who would you want, of any player?' and I promise you that 100 percent of them would say Kevin Durant," Barnes said. "Last year, it was clear-cut [with Morrison and Redick] and maybe it shouldn't have been so early in the season.

"But I'm telling you that no one, no one has had the year that Kevin Durant has had. I don't think it's a race. I really don't. I don't want to take away anything from those other guys, but the kid has had a great season."

Let's deal with the stats first: Durant is fifth in the country in scoring at 25.1 points a game and tied for third in rebounding at 11.4. He's had nine 30-plus point games -- all in the Big 12. He has blocked 55 shots, picked up 54 steals, shot 48.5 percent from the field, 80.1 percent at the free-throw line and 42.9 percent on 3s. Oh, he also averaged 35.2 minutes a game and played 40-plus six times, including 52 minutes in a triple-overtime loss at Oklahoma State. You can argue about his defensive aggressiveness if you like, but Durant never fouled out of a game in the regular season, and committed four fouls only three times.

Those are the hard numbers. Barnes, though, makes a pretty strong argument about Durant's overall importance to the rest of his team.

Tucker has veteran help. So, too, do UCLA's Arron Afflalo, Nevada's Nick Fazekas and Texas A&M's Acie Law IV. Durant had A.J. Abrams, a sophomore guard. That's not to minimize the impact of fellow freshmen D.J. Augustin, Damion James and Justin Mason, but Abrams was about it for quality, experienced help as Durant carried Texas to the verge of the Big 12 title before falling at Kansas by four Saturday and finishing third.

"We lost everybody, and now we're going to our eighth [actually ninth] straight NCAA Tournament," Barnes said. "Kevin did it with inexperience all around him. There was no one for him to rely on."

Let's be honest here: Just like Morrison and Redick, Durant is entertainment. He has market value in college basketball. Of all the quality players listed above, all of whom had stellar seasons, Durant is probably the one person the mainstream fan would pay to see. He is a phenomenon this season because of his freakish ability to score and make it seem so easy -- in the post, on the drive, or from the 3-point line and beyond. And, if a rebound is needed, Durant always seems to be in position despite his slight frame.