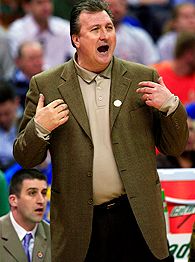 "There should be no games scheduled that day," Calipari said Friday, laughing at his own zany idea.

Of course, Calipari is referencing West Virginia coach Bob Huggins' return to play the school that fired him, which is still run by the president (Nancy Zimpher) who showed him the door.

But there is a deeper meaning here, something that relates to Kansas State and Texas A&M, now that both have to replace coaches who made those programs relevant, albeit for a brief period of time.

Sometimes, a face on the program can drive the traffic. Huggins was just that for Kansas State, reenergizing a dormant fan base that was desperate for a reason to care about hoops again. Billy Gillispie's energy and intensity drew fans to Texas A&M hoops in numbers unheard of for the sport in the heart of football country. Now he's off to Kentucky, where the school could charge fans to watch practice.

"Coaches win ball games, but administrations win championships," Calipari said. "Ohio State and Florida have great coaches, but they've got two of the best administrations. They understand the role basketball plays. And if Kansas State and Texas A&M want basketball to matter, then it will."

Huggins brought instant recognition to Kansas State. Fans flocked to midnight madness. The Wildcats got big-time recruits: one came out of high school early, graduating a semester early since he'd already used up his high school eligibility (Bill Walker); another committed out of ACC/Big East country (Michael Beasley). It doesn't hurt that Huggins hired an assistant coach -- Dalonte Hill -- with strong ties in the East and South.

"Huggs will get better players at West Virginia than he did at Kansas State because of its proximity to his boys in Pittsburgh and other areas in the East, but he did deliver an immediate boost of energy there," said a high-major Division I head coach with knowledge of the situation.

Kansas State has so much passion for the sport that the Wildcats sold out a postseason second-round NIT game against DePaul despite the fact that it took place during spring break. Kansas State finished 23-12 (10-6 Big 12) in Huggins' one season in the Big 12. Huggins' name alone drew national attention, good or bad, for the program. It certainly helped in scheduling, as K-State is tentatively in the Jimmy V Classic next year in New York.

On Friday, Kansas State answered the question as to who will be its next coach, tabbing assistant coach Frank Martin to replace Huggins. A news conference will be held on Monday.

That still doesn't address what will happen with the Wildcats' players, but a source close to Martin, 40, told ESPN.com Martin met with Kansas State president Jon Wefald on Friday, letting Wefald know that he could keep the team intact, including injured freshman Bill Walker and heralded recruit Michael Beasley. The K-State recruiting class of Beasley, Dominique Sutton, Jacob Pullen and Fred Brown has been ranked No. 1 in some circles.

"One of the important factors in our decision to promote Frank was a desire to maintain the continuity of the current program and provide a stable environment for our student-athletes," athletics director Tim Weiser said in a statement. "Frank was a valuable member of a team that achieved some remarkable milestones this past year, and we believe he will continue to move this program forward." 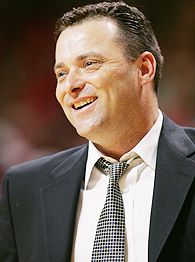 Walker, a former high school and summer league teammate of O.J. Mayo, signed with K-State and graduated early after he was ruled ineligible to compete for North College Hill in Cincinnati. He was on campus by mid-semester and playing by mid-December.

He played in seven games, averaging 9.7 points before tearing his ACL. He's rehabbing and while he only went to K-State because of Huggins, it would be hard for him to leave now, finish rehabbing with someone else's trainers/doctors and sit out a season before he could play. Walker has NBA aspirations and may just want to finish at K-State and declare for the 2008 draft.

"I have an obligation to fulfill with Kansas State, and I'm prepared to go back," Walker said Friday in a telephone interview with The Cincinnati Enquirer.

Returnees David Hoskins (not a Huggins recruit), along with Blake Young, Luis Colon and Jason Bennett are likely to stay now that Martin is getting the job.

The key for Beasley's return will be the return of Hill, who will stay on as an associate head coach. He was at Charlotte when Beasley originally committed there, but then moved to K-State when Huggins hired him.

"When Dalonte was introduced here a year ago, it was as one of the top up-and-coming assistants in the country," Martin said. "He's proved his worth as a basketball coach with the job he did in preparing our team for games this year. It makes my job a lot easier when you have a class person like Dalonte Hill working with you."

Kansas State has more hoops history than Texas A&M, but Gillispie was able to generate unbelievable support after leading the Aggies to the NCAA tourney's second round last season and the Sweet 16 last month.

"There are certain jobs that take constant attention if you're going to sustain them," said a high-major D-1 head coach. "Billy put Texas A&M at that level. He got the Aggies to the upper half of the Big 12 each year."

The Aggies lose point guard Acie Law IV, power forward Antanas Kavaliauskas and reserve forward Marlon Pompey. Prior to leaving for Kentucky, Gillispie told ESPN.com that he expected junior forward Joseph Jones to declare for the NBA draft but then to return to school.

With Gillispie out, it's hard to say what will happen with Jones. The core of this team is there, though, with underclassmen such as Jones (if he stays) and guards Dominique Kirk, Donald Sloan and Bryan Davis. The recruiting class, like K-State's, is heralded, led by Houston-area center DeAndre Jordan. Guards B.J. Holmes, Bryson Graham, Derrek Lewis and forward Nathan Walkup still may choose to go to A&M since they're from the area. The Aggies may fight any releases, too.

"This is an extremely critical hire, and we've got to get the right guy," said a Texas A&M source. "Huggins was at Kansas State only one year. Billy was here three years and built a stronger foundation. He obviously made it a much better job today than it was three years ago."

Texas A&M is close to finishing a $22 million practice facility.

"It's an enticing deal here with vast improvements to Reed Arena, too," the source said. "Look at the money we were going to pay [Gillispie, close to $1.8 million]. It's not a graveyard for coaches anymore. We used to have a hard time getting people interested."

Texas A&M athletic director Bill Byrne will try to move quickly. One name on his radar is Winthrop's Gregg Marshall, whom Byrne spoke with after the Aggies beat the Eagles this season in College Station. Marshall would definitely come if asked.

There is some support within the department to try to pursue Pitt's Jamie Dixon because he played at TCU, but it may be hard to move him from a comfortable, albeit challenging job atop the Big East. There could be interest in Gillispie's chum, Nebraska's Doc Sadler, or in Wichita State's Mark Turgeon. Regardless, the pressure is on both Byrne and Weiser for their hires to maintain the enthusiasm generated by Gillispie and Huggins, respectively.