Southern Illinois was a pest for Kansas and nearly cracked the Elite Eight, yet as schedules are taking shape this month for next season, the Salukis are left fighting for scraps, unable to get a sniff from the big boys when it comes to an A-list tournament or a neutral-site, single-game event.

Oregon went to the Elite Eight last season and yet the phone isn't ringing for the Ducks to be in a marquee event, although they don't seem to be complaining.

Virginia was a No. 4 seed in the Big Dance and was in play for a piece of the ACC title but drew Northwestern (no offense) in the ACC-Big Ten Challenge.

That's the reality facing three programs that are on the rise, especially the Salukis. All have different interests, and you could argue that they have varying philosophies on the subject.

Virginia ultimately will be fine. Recently, Cavaliers coach Dave Leitao said the Cavs will return a game to Stanford and are working on a series with Syracuse as well as a return game with Arizona. That's quite a slate. But for whatever reason, Virginia isn't getting respect in the ACC-Big Ten Challenge. The reason is quite simple: Duke and North Carolina are always going to get the top two perceived teams in the Big Ten, although matchups can sometimes alter that (for example: Duke is playing Wisconsin next season after previously playing Michigan State and Indiana -- the two likely Big Ten favorites -- while North Carolina is returning a game to Ohio State).

The way it shook down for the Cavs is this: The only other team that could have arguably been in their slot was Illinois, but the Illini got placed with Maryland on the road (there are home-and-road issues, too). Virginia is expecting to get plenty of ESPN and ESPN2 games once the ACC schedule is finalized, and there is a good chance that the aforementioned Stanford, Arizona and Syracuse games will get national play.

So if there is a slight against the Cavs it is mainly in the Challenge.

Oregon is in a different situation because of Fox Sports Net's exclusivity. The ESPN and ESPN2 windows are limited to Oregon going on the road. Oregon coach Ernie Kent said he's more concerned about the pop coming off the Elite Eight in recruiting than scheduling. But the schedule isn't littered with nationally televised games.

Oregon will play at Kansas State in a scheduling agreement between the Pac-10 and Big 12. The game likely will be picked up by a regional carrier at the very least. Oregon's game at Nebraska probably won't get national play, according to Kent. The Ducks are tentatively scheduled to be in a doubleheader at the Palace of Auburn Hills against Oakland (a home game for Detroit natives Malik Hairston and Tajuan Porter), with the headline game being Texas-Michigan State. Kent said he doesn't expect the Oakland game to be on national TV. The Ducks will host a tourney at home with Pepperdine, Long Beach State and another squad, and they are still looking for an opponent for their Portland Jam event. 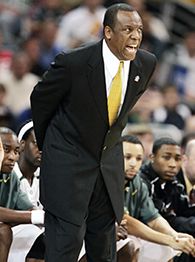 "We had a great run with the Pac-10 [title] in L.A., winning NCAA games in Spokane and St. Louis where we recruit in the Northwest and Midwest," Kent said. "Players remember that more than who you play in November or December."

Yes and no. For whatever reason, Gonzaga seems to be remembered for the games it plays in those first two months of the season. The games that it gets, that a school like the Salukis can't touch, are ones like last season's contests against Texas (in Phoenix) and Duke (in New York), being a host in the NIT Season Tip-Off, getting featured in the Maui Invitational or taking on UConn in Boston this upcoming season.

Southern Illinois is 127-38 the past five seasons, 75-15 in the Missouri Valley with a 3-5 NCAA Tournament record, including a Sweet 16 last month. Gonzaga, during that same stretch, is 130-32 overall, 63-7 in the WCC (the WCC plays 14 games to the Valley's 18) and an NCAA record of 5-5 with one Sweet 16 (in 2006). There are plenty of other differences between the two schools, like the number of top-50 recruits the Zags can lure that the Salukis can't, or NBA players (let alone draft picks) like the most recent (Adam Morrison and Ronny Turiaf). Add a national player of the year (Morrison) and a major Nike deal that seems to put the Zags equal at times to the big boys dressed in blue (like Carolina, Duke and Kentucky) and the Salukis can't compete. SIU isn't getting that kind of play.

But if there is one area where the Salukis would like to catch up, it is in scheduling. They feel they deserve to get more of a play and it's simply not happening.

"We've got more living alumni than Kentucky and Alabama, and we show up wherever we go," SIU athletic director Mario Moccia said. "But maybe we're not as romantic a name. We're not as sexy as Gonzaga. We [pick up] our lunch pails [and play a defensive-oriented style]. We're not as exciting. Maybe we're not as appealing to the masses."

SIU was in an ESPN regional-sponsored Orlando tournament last season. The Salukis will play in a similar event this season in Anaheim with USC. They will get on TV, but everyone in the industry would admit it's not played up as well as Maui or the NIT.

The rest of the slate for the Salukis next season is this: Indiana at home, Western Kentucky, Butler and Saint Mary's (a BracketBusters home game), and road games at Charlotte, Saint Louis and Murray State. The Indiana series, which started last season in Bloomington, wasn't a traditional home-and-home. According to Moccia, the only reason it occurred was that Indiana requested SIU to move a football game, and as part of the deal SIU got IU to sign on for a home-and-home hoop series.

Gonzaga can get Virginia and Stanford for true home-and-home games. Memphis and Georgia played in the Spokane Arena, but the Zags also didn't play on campus at either place (to be fair, the Tigers don't have an on-campus arena, as they play in the FedEx Forum). Oklahoma State played the Zags in Seattle and also in Oklahoma City. Missouri was the last team to play a Seattle game against Gonzaga but got the advantage of hosting the Zags in Columbia.

SIU doesn't see these kinds of games. Missouri Valley Conference commissioner Doug Elgin said he encourages the Salukis and all of his teams not to play one-way games without a return, which the Zags don't do either. 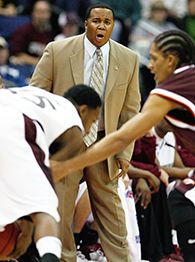 SIU coach Chris Lowery, who got a bump up in salary to the $750,000-range to put him at a high-major level, has won 29, 22 and 27 games in his three years on the bench. He said he'd love to play neutral-site games in St. Louis or Chicago against Illinois or Missouri, but they don't want to play.

"We've tried," Lowery said. "Teams don't have to come to Carbondale. We would do a neutral-site game."

The Salukis had an offer for next season to play George Mason in Washington, D.C., as part of the BB&T Classic. But that's not what Lowery is talking about. He said he could get the Patriots on his own for a home-and-home. Now, if you want SIU to play Georgetown in D.C. with a neutral-site return, well, that he would do.

"We're getting respect, but no one wants to play us on a neutral court," Lowery said. "Last year we played seven of our first 11 on the road. Our league is pretty tough and what we've done is pretty impressive. We have people tell us that we'll buy you, but that's not fair to our fans. We owe it to them to play games at home or at least a neutral site. It's also about economics and revenue streams."

Lowery said playing in an event like Maui (as Oregon is in 2008) would "elevate us."

"Just look at Gonzaga, when Adam Morrison almost single-handedly beats Michigan State and then [the Zags fall to Connecticut] ... and [Morrison] goes in the lottery. You can see how that can help you in recruiting and scheduling," Lowery said.

"Gonzaga had their success in the NCAA Tournament, and we've got to keep doing that too," Lowery said.

But even then, even if SIU were to get in another Sweet 16 -- the Salukis were in the Sweet 16 in 2002 under former coach Bruce Weber -- the phone might not ring.

"We'd love to get those Gonzaga-type neutral games. We feel our record the last five or six years shows we should," Lowery said. "But it's a lot easier said then done."

Yes it is, especially when no one is calling requesting the Salukis to headline an A-list event.