CINCINNATI -- The NCAA's decision to allow Tyler Smith to play immediately at Tennessee was a compassionate one since Smith's father is battling an advanced stage of lung cancer in nearby Pulaski, Tenn.

But the reality is that this move makes the Vols, a preseason top-10 team, even more of an SEC title favorite. 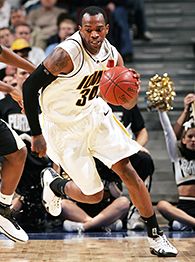 Tennessee coach Bruce Pearl wasn't hiding from the obvious at the adidas It Takes 5ive Classic on the Cincinnati campus Saturday. He said he will start the former Iowa forward this fall. And he will highlight Smith's ability to score inside and out, saying that Smith will flourish in his ball-screen offense, using him off pick-and-pop plays and allowing the Smith to play small forward and power forward.

Pearl said he will likely have three Smiths in the starting lineup -- Tyler and guards JaJuan and Ramar Smith (unrelated) -- to go along with SEC Player of the Year favorite Chris Lofton at guard and forward Wayne Chism. The starting five will be quick but on the smaller side with the 6-foot-7 Tyler Smith and the 6- 9 Chism as the only players taller than 6-2.

That lack of size shouldn't matter. This will be a classic Pearl team -- scrappy, wiry and all over the court.

Landing Smith is by far the least expected move in Pearl's tenure.

As Pearl retells his side of the story of his relationship with Smith, it's easy to question whether this would have occurred had Smith's father not become ill. (Smith was recruited to Tennessee by the man Pearl replaced, coach Buzz Peterson, and signed an National Letter of Intent. When Peterson was fired, it was reported that Pearl fought the release of Smith's scholarship. Smith reportedly didn't qualify academically, either, which made the decision moot.)

"But he didn't know me, he didn't trust me," Pearl said. Upon reviewing the recruitment of Smith, Pearl added that he discovered a number of "things we did wrong as a university in the recruitment.

"I had to tell the AD, and after our investigation a booster was removed from being around the program for two years -- no tickets, no privileges. We had to declare Tyler ineligible for us to recruit, and I refused his letter of intent."

So Smith went to Hargrave Military Academy in Virginia before landing at Iowa under Steve Alford. Smith was a hit in Iowa City his freshman season, averaging 14.9 points and 4.9 rebounds a game. It's unclear if Smith would have still left Iowa because of his father's illness if Alford stayed with the Hawkeyes instead of going to New Mexico. Still, there was a natural pull to Knoxville once there was a coaching change -- Butler's Todd Lickliter took the Iowa opening.

At the same time, Pearl said the Volunteers' program changed since Smith first signed at Tennessee. The Vols reached the second round of the NCAA Tournament two seasons ago and the Sweet 16 last season.

All that added up to a natural move to Knoxville for Smith this season.

• Impressions from USA Basketball U-19 assistant coach Bruiser Flint of Drexel were right in line with those from the Fran Fraschilla column on ESPN.com.

The biggest surprise has been Ohio State's David Lighty, a player who Flint is a great fit. He has been a hit with the coaches for his ability to fill a variety of roles. The expectation is that Lighty should have a breakout season with the Buckeyes in 2007-08, following the departures of Ron Lewis, Ivan Harris and Daequan Cook.

Incoming Texas A&M freshman center DeAndre Jordan is going to make a "gazillion dollars," according to Flint. He is likely one-and-done, and Flint sees star written all over this player.

Incoming Syracuse freshman Jonny Flynn is an outstanding defender who could cause Jim Boeheim to play more man-to-man defense because of his ability to pressure the ball.

Oregon's Tajuan Porter is trying to play some point but was playing the position like a shooting guard. That should come as no surprise, since Porter played off the ball as a deft shooter next to Aaron Brooks last season. 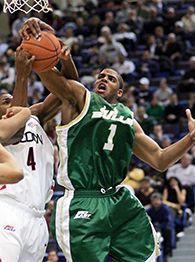 • Clearly something is amiss at New Orleans considering that the last two head coaches left for assistant coaching jobs. Monte Towe went back to his alma mater last season to be Sidney Lowe's assistant at N.C. State. Buzz Williams left to join Marquette coach Tom Crean's staff after one season.

• One sight I wish I would have seen Friday was Bob Huggins lounging in the Shoemaker stands in full West Virginia garb. The thought of Huggs wearing the Mountaineer colors in the house that he built at UC is just too odd to digest at this juncture.

• New South Florida coach Stan Heath, ever the optimist, said 6-9 senior Kentrell Gransberry may be the most "underrated player in the Big East." Gransberry played in 23 games last season and averaged 15.6 points and 11.4 rebounds. Gransberry did have quite a finale with 26 points and 23 rebounds in a loss at DePaul. The problem is that Heath needs more than Gransberry for the Bulls to climb higher in the Big East. But Heath is quite confident that the Bulls will be better than expected.

North Carolina's Roy Williams is yet another coach who doesn't want to hear about lottery projections anymore. He was told that freshman Brandan Wright was going to go in the three-to-five range. And once he heard that, he was OK with Wright leaving. But a few days before the draft, Wright was said to be falling possibly to double digits. Had that happened, Williams wasn't going to advise any player, save someone who was a lock for No. 1, to go to the NBA early. Wright ended up going No. 8. That slot -- initially to Charlotte -- was OK in Williams' mind once Wright was traded to Golden State. The Warriors (along with Phoenix) were one of two teams Williams thought would be the perfect fit for Wright's style of play.

Williams, by the way, always looks good in the summer: tan, relaxed and at ease. No high-profile coach loves the summer-evaluation period as much as Williams, who is a big fan of the AAU tournaments and the team-oriented games more than the previous all-star individual camps.

• The major difference between having an AAU/team event on your campus in April versus July is the ability to contact recruits. When Pitt hosted an event in April, the players made unofficial visits before and after it. But this month recruits can't do that, so Cincinnati won't be able to take advantage of having the players on its campus. Still, the fact the players can walk around UC's campus and play in its gym can be an advantage. As for Akron, having 80 of the top players on its campus for the LeBron James Skills Academy might not be as advantageous since the majority of those players are either out of its league in terms of their talent or out of Akron's traditional geographic recruiting base.

• Ohio State's Thad Matta is hobbling around this month with a cane after having back surgery.

• Maybe my favorite story of the day came from Northeastern's Bill Coen. He was recounting how he had a Final Four-like crew of officials for a December game against New Hampshire last season. Well, when the game was over, the officials -- Carl Hess, Duke Edsall and Michael Stephens -- found out their car had been towed. Naturally, Coen was not amused as he was trying to get high-profile officials to do games at NU. Coen's hope is that this incident won't curtail the Huskies from getting respected crews in the future.