Either you get the game, or you don't. It's not a matter of pedigree or personal experience. It's about understanding the game and teaching it to the players. You don't need to have a 15-foot jumper to do it.

While the NBA tends to look more at former players like Sam Vincent (Charlotte Bobcats) and Reggie Theus (Sacramento Kings) to fill its coaching vacancies, the college game seems to be much more diversified. Take a look at some of the most recent hires (New Orleans' Joe Pasternack and San Diego's Bill Grier) and successes (Illinois' Bruce Weber, Marquette's Tom Crean, Tennessee's Bruce Pearl and Gonzaga's Mark Few), and you'll find that they either didn't play Division I ball or chose not to play at all in college.

There is a long list of former players who weren't successful coaches (Clyde Drexler anyone?). Now a handful of coaches are proving that even without a Division I assist or point to their credit, they're winning on the Division I level. 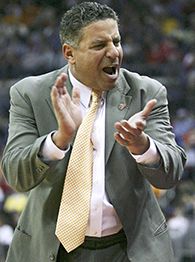 There is no one perfect career path. While some coaches may look at it as an advantage if they did play, coaches who didn't play in college don't think one second about their lack of playing experience, or if they'd be better-suited as coaches if they had that on-court playing experience.

"I don't think you have to have been a great player [to coach]," Pearl said. "You just have to understand the game, and how to teach the game."

"You just have to have a great understanding of basketball and teach it and enjoy dealing with young guys," Few said. "The proof is in the pudding. There have been a lot of great players out there that haven't turned out to be good coaches, too."

Few said he could have played in Division II or walked on at a D-I school. But he wanted to go to Oregon, and stay in-state for college. So he eventually got his start at his high school in Creswell, Ore., and moved up by working Don Monson's camps at Oregon and then by working for Dan Fitzgerald at Gonzaga.

"I certainly played a ton well into my 30s until I blew out both knees," said Few, who is is 211-52 in eight seasons at Gonzaga.

Crean said he never regretted that he didn't play.

"If anything it drives you to study more to just get out and learn more," he said. "Whether you played or didn't play, it all comes down to passion."

Crean worked at Mount Pleasant (Mich.) High before he was a grad assistant at Michigan State under Jud Heathcote. He went to work as an assistant coach at Western Kentucky for Ralph Willard, and then followed Willard to Pitt, before returning to MSU as an assistant under Tom Izzo in 1995. He later landed the Marquette gig and eventually took the team to a Final Four, 14 years after his first stint with the Spartans.

"I remember a long time ago that Fran Fraschilla [now an ESPN analyst and another former coach who didn't play] told me that when you're starting out as a coach, you're two laps ahead from the guys who are [still] playing," Crean said.

Crean is a sponge, constantly looking for different angles. He has studied the organizational structure of the Montreal Canadiens, Tony La Russa's style in baseball and has quite a support system since he married
Joani Harbaugh, the daughter of former Western Michigan football coach Jack Harbaugh and the sister of former NFL quarterback Jim Harbaugh.

"Whether you played or not, you don't want to fail," Crean said. "I always wanted to be ahead of the game in as many areas as you can be. The only way to do that is to study and learn it."

Grier learned how to teach the game and fundamentals from Donn Pollard, his coach at Cottage Grove High in Oregon. And then, like Few, he worked for Fitzgerald and Dan Monson at Gonzaga before being Few's top assistant.

"You work with three head coaches who put a lot of responsibility in your hands as an assistant outside of recruiting," said Grier, who was named San Diego's coach this spring. "You're expected to teach and develop guys and that has helped my growth as much as anything. Some guys grow up to be coaches. I didn't. I fell into it and figured out that's what I wanted to do."

Pasternack went to Indiana specifically to learn from Bob Knight.

"Since the fifth grade I was obsessed with college basketball and looked at what career path I should take," said Pasternack, a former Cal assistant who in July landed the head coaching job in his hometown of New Orleans. "I wanted to study from the best. If I wanted to be a lawyer, I'd go to Harvard. I wanted to be a basketball coach. The best class I ever took was every day at 2:30. I went to practice and took notes on everything."

Since the fifth grade I was obsessed with college basketball and looked at what career path I should take. I wanted to study from the best. If I wanted to be a lawyer, I'd go to Harvard. I wanted to be a basketball coach. The best class I ever took was every day at 2:30. I went to practice and took notes on everything.

Pearl's mentor was Tom Davis. Pearl realized he wasn't talented enough to play at Boston College. So he went the managerial route to stay involved in the program. Eventually he latched on as an assistant, following Davis to Stanford and Iowa before Pearl got his head coaching start at Southern Indiana, a Division II school.

"The one thing that I knew I have had to learn is to keep guys happy offensively and be able to get guys the ball in certain situations as a coach," Pearl said. "I want to get the ball to the best player in the best situation."

Coaching is in the Weber family. His father was a coach. His younger brother, David, is a high school coach in Illinois.

Just out of high school, Weber went to Louisville to work at a basketball camp, when a run-in with a basketball legend convinced him to take the same career as his father.

"I was a note taker," Weber said. "I was 18 or 19 years old. I still remember walking with coach [John] Wooden in Louisville at 6 a.m., walking with him to the parking lot, and that's where I got the whim to try the college thing."

Weber's plan was to play baseball at Wisconsin-Milwaukee. But the school dropped the sport. He tried to walk on the basketball team, but realized that wasn't going anywhere.

So he started coaching, beginning with a junior varsity team at a local high school. He watched at Marquette and learned at clinics under Rick Majerus and Al McGuire.

Weber went to Western Kentucky for grad school in 1979, worked under Gene Keady as a grad assistant, and stuck with Keady when he moved to Purdue. Weber spent nearly two decades with Keady, studying plenty of other legends in the Big Ten, like Knight and Heathcote.

"Sure, it's good to have a former player on your staff, and I did rely sometimes on [former Purdue player Matt Painter] and ask him how did you feel about certain things and when to back off," said Weber said, who landed his first head coaching job at Southern Illinois in 1998.

There is no one way to become a head coach. But the reality is that athletic directors don't need to be and haven't always been swayed by the glitz and glam of the former player. The student of the game, whether that tutorial was held on the court or in a scouting session, is getting an equal shot.