MEMPHIS, Tenn. -- The vote had been taken. It was unanimous. John Calipari was leaving. He was going to accept the NC State job.

Every assistant on the private jet flying through the spring night in 2006 from Memphis to Raleigh had his hand up. Assistant John Robic, who had been with Calipari at UMass, voted with his leg. It was their way of assuring the coach that they would all make the move to the new school with him. 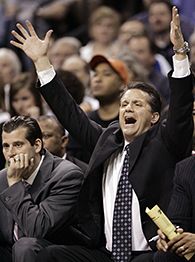 "Yeah, we were gone," Calipari said last Friday as he ate fried chicken in one of his many spots along Beale Street, within eyesight of the FedEx Forum.

Calipari was enticed by NC State's commitment to the program, the financial considerations for his staff, and the challenge of facing the blue bloods at Duke and North Carolina.

Meanwhile, the Memphis Tigers were coming off an Elite Eight run ultimately ended by UCLA. It was the last game of Calipari's sixth year at Memphis in what had been a bumpy ride to resuscitate a once nationally known program.

"The thing I can tell you about coaching is that we make decision and career moves when your nerves and emotions are still raw, right after the season," Calipari said last Friday. "It's the worst profession for that. Other professions, they have time to sit back and process and logically make a decision.  Emotionally, we don't have a chance to decompress, to make a good decision. Thankfully, people got involved in the decision."

When Calipari flew back with his staff, he took a midnight walk with the Memphis team minister along the golf course where Calipari resides. He later spoke with some of his new influential friends at FedEx.

"The NC State thing was the most emotional thing we've been through here," said Calipari's wife, Ellen.

Memphis is unique. The city loves its basketball and has plenty of talent in the area. Sure, an NBA team is now in town with the Grizzlies, but the school, like many major universities in the South, is akin to a pro team. But what makes Memphis different is the corporate power of FedEx. As much as the folks in western Massachusetts were passionate about the Minutemen, they didn't have the wherewithal (i.e. funds) to make things happen, Calipari said. Memphis does.

And Memphis stepped up when it counted, making a financial commitment to Calipari and his staff. Rebuilding versus staying where he had a legitimate contender returning was also a factor in Calipari's decision. So, too, was his desire for the first time not to make a change.

Now, the Tigers are a national contender. For the third year in a row, they have a shot at the Final Four. They may get to a third straight Elite Eight, an achievement reserved for a select group of programs lately, such as Kentucky during 1995-99 and Michigan State during 1999-2001. UCLA will be attempting to match that feat this March as well.

"This is a tough city," Robic said. "We got 66-8 the last two years and, for a lot of people, that's not good enough. Honestly, it's the drive to win it all. I think that's why we work for him and that's all he wants -- to win a national championship. We made it one step closer [last March] but we're not satisfied."

The Tigers, who return every major contributing player outside of Jeremy Hunt, added one of the nation's top freshmen in guard Derrick Rose. Given the loaded lineup, the likelihood of again dominating the still-struggling Conference USA, and a monster nonconference home schedule (Georgetown, Arizona, Gonzaga and Tennessee), Memphis will be one of the favorites to win the 2008 NCAA title in San Antonio.

All of this is quite remarkable for Calipari, considering no one thought he would still be here for Year 7, much less Year 8.

Calipari admitted he too never thought he'd still be in Memphis. But he promised his family that his two daughters, Erin and Megan Rae, would get through high school in Memphis.

Erin is now in her second year at UMass. Megan Rae graduates from high school this year. Calipari's youngest child, Bradley Vincent, turns 11 this November. Will Calipari stay through his son's graduation from a Memphis high school?

Calipari has taken some chances at Memphis to turn the program around. Some worked out, some didn't. Dajuan Wagner came to Memphis with his father, Milt. Wagner's impact wasn't as powerful as predicted. But to probably most people's surprise, Milt stayed on as the director of basketball operations after Dajuan went to the NBA. Ultimately, Milt went with assistant Tony Barbee when he got the UTEP job last year.

Sean Banks was a talent, but couldn't stay out of trouble, declared for the draft and was a bust.

The aggressive local media has kept Calipari on his toes, especially when a player gets into trouble.

Calipari is bothered by the perception that was attached to him after the 1996 UMass Final Four appearance was stuck with an asterisk and vacated due to allegations that star center Marcus Camby was being paid by an agent. That doesn't taint anything he accomplished there, Calipari said.

Although his tenure at Memphis has been rocky because of those self-described mistakes with player evaluations, Calipari is working to reinvent his image. He can hardly carry on a long conversation without mentioning one of his players working toward a degree. Twelve of 15 seniors who played for Calipari at Memphis have graduated, according to the school. Current senior Andre Allen will be the first member of his family to earn a degree.

Calipari, who has never been one to play it safe, has also reinvented himself on the court. Three years ago, he decided to completely change his style of play.

When he was at UMass, his success relied on his zone offense, designed to beat Temple's matchup zone defense. But when he arrived in Memphis, that didn't fly and the Tigers were too slow.

So, against the advice of his mentor, Larry Brown, Calipari listened to a junior college coach from Fresno, Calif., named Vance Walberg and implemented a new offense.

Calipari calls it driving motion (or "Princeton on steroids") because it relies on the players' being essentially interchangeable parts.

"It was a total transformation of how he coached at UMass," said assistant Robic, who was with Calipari at in Amherst.

"It's fast and aggressive," Robic said. "Before we were a [walk]-it-up, slow-down, play-set team. Now we speed it up instead of grinding it out."

Calipari is convinced that this new offense, created by Walberg (who is now the head coach at Pepperdine), will become the new fad. He said if he could find a player like former Florida 3-point shooter Lee Humphrey, the Tigers would average 90 points a game.

"The defense can't stop it," Calipari said. "If I could find a kid like Humphrey, that kid would be Elvis here. It's the European style. It's Princeton on steroids, not just dribble-drive or drive and kick."

Calipari allows his players to create on their own, giving them the freedom that they crave. It suits players such as Chris Douglas-Roberts, Antonio Anderson, Allen, Rose, Robert Dozier and even, to some degree, Joey Dorsey, as they drive and power their way to the hoop, always looking for the driving angles to create a play.

"Every time you get the ball, [Calipari] wants them to make a play, beat your man," Robic said. "If you can shoot a layup every time, shoot a layup."

Rose may be the most versatile player in Calipari's system. He's a top-five NBA talent and no one on the staff would be surprised if he bolts after his freshman year. Dorsey and Allen, both seniors, will be gone after this season. Douglas-Roberts and Dozier, both juniors, may declare for the NBA draft next spring. That would be fine with Calipari. That would mean his team had a successful season, that the Tigers probably made the Final Four or even the national title game, win or lose.

Calipari would like nothing better than to stand on that stage in San Antonio, to show he made it back to the top and that he could bring two non-BCS programs to the Final Four.