LOS ANGELES -- This is Tim Floyd's dream. Ben Howland wouldn't mind if it happens, but he doesn't necessarily share the dream.

But Floyd is adamant that one day, sometime soon, he wants USC-UCLA to mean as much and to be revered to the degree as Duke-North Carolina. 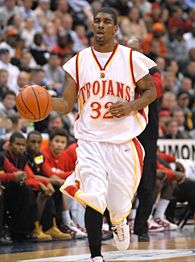 Floyd is serious. He has been thinking about this for some time. This is his goal: Make the Trojans into such a power that they can rival UCLA on a regular basis. And with the way the Bruins are rolling right now with two straight Final Fours and it seems every top California recruit answering their phone calls first, a USC-UCLA rivalry would become national.

"We're trying to be comparable nationally to what Duke and Carolina have accomplished 10 miles apart," Floyd said. "We recognize that the other three [Duke, UNC and UCLA] are there. Ten years ago, 12 years ago, I would have never made a comment like this, because you never try to over-promise and under-deliver, but at this point in my career I recognize this is my last job. We want to set the bar high, and we'll never get there unless we set the bar high."

Howland respects Floyd, said he's one of the top coaches, applauds the new USC facility (the Galen Center) and praised the run to the Sweet 16. While the UCLA coach doesn't dismiss the rivalry, he's not quite as animated as Floyd about it either.

"Do I think they can be that good to where they're going to make us like Duke and Carolina, assuming we're that good?" Howland said on Tuesday. "It's a big challenge. No question that means you go to Final Fours and win national championships. That's what Duke and Carolina have done. I can't say I sure hope that they get that good, but that'd be great."

The intensity of the rivalry between the two schools, the two fan bases, is always at an all-time high. The two games are always rotating between CBS and ESPN for national audiences.

USC and UCLA have finished in the top four in the Pac-10 and have been to the NCAA Tournament in the same season only twice in the past 10 seasons and just six times since 1978.

Ah, but times are changing.

The reality is that the onus is on us since the other three are established. We have to get there. We're only into our third year and we still have a ways to go.

And, in case you haven't been up to speed of late, two of arguably the top-5 players in the class of 2007 -- and easy lottery picks for the 2008 NBA draft if they declare -- are in L.A. UCLA has center Kevin Love from Oregon ready to anchor in the post, while USC will ride West Virginia native O.J. Mayo from his lead guard position.

They're both loaded for the near future as well. The Bruins are clocking in with the top class for 2008, getting commitments from the top players in the state like Jrue Holiday, Jerime Anderson, Drew Gordon and Malcolm Lee. USC is on the Bruins' heels with Demar Derozan out of Compton, Calif. and Malik Story, who is from Lakewood, Calif., but currently at Oak Hill Academy in Virginia.

UCLA is the favorite to win the Pac-10 and is one of a handful of picks to win the national title. USC should be a top-5 Pac-10 team and an NCAA entrant. And, at least one of the two games (Jan. 19) is set for a national telecast on CBS.

Having Mayo and Love in the same market isn't lost on the players, either. They both relish being able to play against one another after going head-to-head (even though they play different positions) during the summer scene. Heck, Mayo chose USC because he wanted to be in a major media market on the West Coast to test his marketability for his future pro career.

"I think it's a huge deal," Love said of having two of the top players at the L.A. schools to feed the rivalry.

"It would be a good thing for the area," said UCLA point guard Darren Collison, who is from Rancho Cucamonga. "I think they can get to that point [of being a national player]. Tim Floyd is doing an exceptional job recruiting players in there. Coach Howland, as you can see, continues to bring in guys. So, anytime you have two schools bringing in top-10 players from the country, it will be good competition."

One player who has a good grasp on rivalries is USC freshman James Dunleavy. Dunleavy has grown up in L.A. with his father, Mike Dunleavy, coaching the L.A. Clippers. But he watched his older brother, Mike, play at Duke, giving the freshman at least one side of the heated rivalry. 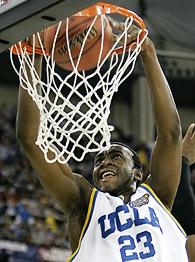 "The L.A. rivalry is huge, but I don't think it's been as big a national rivalry because UCLA has always been strong and USC hasn't been strong until now," Dunleavy said. "Now if we can keep the program prestigious like UCLA and they keep it up then, I don't see any reason why we couldn't be like Duke and Carolina."

Dunleavy cited the intensity of the schools' football rivalry, even though USC's program is seemingly competing for a national title every year and UCLA isn't.

"If we keep building the program to their level and compete for national championships every year, then the rivalry can be what Duke and North Carolina is," Dunleavy said.

Floyd compared USC's private school education, the lofty price tag to attend and the academic reputation to Duke. He said the wealth of talent in southern California makes the rivalry even more of a possibility.

"We feel like it's one thing to say something, it's another thing to go out and do it," Floyd said. "But we feel like the tools are in place to do that."

Now granted, the Pac-10 isn't looking for competitive teams. Arizona has been the most consistent team in the Pac-10 over the last 10 years and clearly have been the chief UCLA rival. Oregon has had its runs too (two Elite Eights recently, including last season). Stanford has been a power in the late 1990s and early 2000s. And even Washington was a No. 1 seed in 2005.

But to mimic Duke-North Carolina, you have to have the geography down. The two L.A. schools are just miles apart, even if it might take an hour to get between the two schools because of traffic.

Still, it's hard to deny that with Floyd at USC, and the recruiting going national, there is a clear intent to sit next to UCLA at the head table on a yearly basis.

"The reality is that the onus is on us since the other three are established," Floyd said. "We have to get there. We're only into our third year and we still have a ways to go."

One thing is certain, the better USC becomes, the more likely the rest of the Pac-10 will find it improbable to sweep through L.A. on a Thursday-Saturday road trip anymore. That weekend road swing through the two rivals within three days is something ACC teams don't normally have to do.

So, maybe there is something that USC-UCLA already has up on Duke-Carolina. Hey, at least it's a start.