He is. And, for however long he can continue to offer guidance or a living history of the UCLA program, Bruins freshman Kevin Love is going to listen.

Love also is going to ask as many questions as he can to absorb what it means to be at UCLA, how he can hang a 12th national championship banner in Pauley Pavilion and maybe, even if he's in college for only one season, become as effective as some of the great centers who have passed through the school.

No player on this UCLA roster and few, if any, incoming Bruins freshmen over the years have reached out to Wooden as much as Love, the most heralded center to arrive in Westwood since Lew Alcindor and Bill Walton, the two Hall of Fame post men Wooden coached. Junior Darren Collison said he has never called Wooden. Fourth-year junior Josh Shipp admitted how rare it was for any of the Bruins to call Wooden. Neither player knew of any other Bruin who did call the legendary coach.

Even Wooden admits how rare it is for UCLA players to reach out to him and to call him.

"I'd say more did that the few years after I retired than today," Wooden said last week. "Although there have been some, it's fairly unusual today."

Love isn't hesitant to ask anything. He stopped Kevin Garnett during summer pickup ball at Pauley Pavilion and asked the perennial NBA All-Star to show him his footwork. So his talking to Wooden shouldn't come as a complete shock.

"I just turned 19 [on Sept. 7] and I know my history," Love said. "I think it's the best thing in the world. He's not only the best coach of any coach of all time, but he's also one of the best human beings you'll ever meet. He's always going to give you the best advice, always positive, never going to be negative. He's as optimistic as possible."

Wooden said current coach Ben Howland asked the legendary coach to meet with Love when the Oregon prep star came to UCLA for his recruiting visit in June 2006. Love's father, Stan, starred for Oregon during 1968-71 and played against Wooden's Bruins. So there was certainly a familiarity. But more than anything, Wooden had seen tape of Love and instantly knew the 6-foot-10 forward is a significant talent.

He looks like one of the best I've seen getting the ball out on the fast break, compared with Walton and except Alcindor.

Love said he fell in love with UCLA as soon as he sat down with Wooden.

"That was one of the main reasons I came here," said Love, who played at Lake Oswego High in Oregon. "I know coach Howland knows how to win, but ... I got to sit down with coach Wooden for an hour and ... I call him every now and then and get to visit with him. The history here is a big deal to me."

How many 18- or 19-year-olds search out the elderly for advice? But Love didn't just stop with his initial recruiting talk with Wooden. He continued to call him, about once a month initially, and it has picked up ever since Love arrived in L.A. over the summer.

Love wants to hear every story. He wants to know about the work ethic of Walton and Alcindor. He has asked Wooden about his famed Pyramid of Success, too.

"I just want to know what it takes to hang one of those banners up," Love said last week as he pointed to one of the 11 national championship banners that hang inside Pauley Pavilion.

Remember, this is a college freshman talking. That's why Wooden was so struck by Love's insatiable appetite to know more about UCLA and what it takes to become an elite player.

In a UCLA practice on Tuesday, it was clear that Love doesn't need a refresher course on the Wooden principles. The freshman led the Bruins in rebounding during the practice, just as he does every day because he is very good at sealing his defender and going for the ball with two hands and his elbows out.

But assistant coach Scott Garson, understanding Love's respect for UCLA history, told the freshman that Walton and Alcindor used to get 12 rebounds in a practice. Love had just eight boards that day. Love responded by saying he was going for a dozen the next day.

Wooden said the strength of Walton and Alcindor was that they "looked for the pass first" and that they were very good on the fast break. Love, in his few workouts and practices at UCLA, has already shown Wooden that he could perhaps follow in those big men's considerable footsteps.

"He looks like one of the best I've seen getting the ball out on the fast break, compared with Walton and except Alcindor," Wooden said. "Hopefully, we'll see Howland using that." 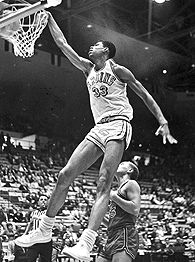 Four of five starters return from a Final Four team. The Bruins return one of the top point guards in the country (Collison), will have a healthy Shipp (hip surgery) in Afflalo's spot, can slide a versatile Luc Richard Mbah a Moute (who was used at power forward last season) to small forward and will rotate Lorenzo Mata and Alfred Aboya at power forward next to Love at center.

But for the first three days of practice, Love wasn't getting the ball in the post. His new teammates at UCLA hadn't figured out that if they fed him in the post, the offense would open up. So the Bruins' staff started force-feeding post entry passes. It didn't take long for teammates to understand Love's effectiveness in the low post.

"He knows how to play the game and that's the key," Shipp said. "His skill level makes it easier for everybody else."

It hasn't all been a smooth transition. Like every freshman, Love has had to adjust to the speed of the college game and the strength of the big men (especially teammate Aboya).

"The first day I was shocked by the speed and physicality," Love said. "I've been playing a lot, but it's still different going against bigger people every day."

Love is also still learning where to be defensively, realizing he can't get away with what he could in high school. Howland said learning the defensive positions and how to use his strength to avoid frustrating situations will be a must for Love's development.

"He gets pissed," Howland said of Love's frustration level if he gets beat or makes a mistake. "He's going to make mistakes, great players do."

And that's where Wooden fits into Love's life.

"If you're down after practice, you can always call him to pick you back up," Love said. "He's always positive. He's a great leader, born to be a leader. As old as he is, he's still coach Wooden, the Wizard of Westwood."

Love said he was asked incessantly at the school's media day about how long he'll be a Bruin, whether he has a one-year lease or whether he'll be in the NBA draft come June. He answers it the same way: He's focused on the present, and that means working in a Wooden-like manner toward a national title.

"I'm hoping I can follow in the steps of Mr. Walton and Mr. Abdul-Jabbar and if I do half of what they did, I'll be all right," Love said. "I'm just happy to be mentioned in the same breath of them. I'm just happy trying and making my mark."

He already is by seeking out Wooden's guidance on a regular basis.