Joe Alexander's first impression of Bob Huggins was that the coach was simply humongous.

When Huggins entered the West Virginia Coliseum on April 5 for his introductory news conference in a "big, nice car" with a "big entourage" like a "rock star," the 6-foot-8 Alexander was struck by Huggins' broad shoulders.

Alexander, like senior guard Darris Nichols, had a preconceived notion that Huggins must be "crazy." 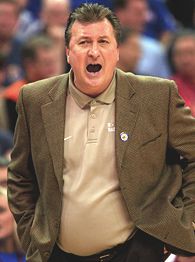 Two weeks into practice, the two anchors for Huggins' first Mountaineers' team are sold on Huggs. And, of course, they've changed their impression.

Huggins is much more mellow then they ever imagined when he's not coaching (he is the ultimate low-talker when he's not on the sidelines). He's got their back and professes his loyalty daily. He is more demanding about staying in a defensive stance and going after rebounds than former West Virginia coach John Beilein. And, much to their surprise, Huggins is embracing the Mountaineers' ability to shoot 3s and backdoor cut at will.

They are pleasantly stunned that they are a hybrid team less than a month into the season. While absorbing Huggins' toughness and man-to-man defensive mind-set, the Mountaineers are retaining their well-schooled Beilein offensive sets that has made playing the Mountaineers such a headache.

Huggins had a similar presence last season in Manhattan, Kan., strolling into that town dressed in purple and black. A year ago, he was at Big 12 media day in Oklahoma City, discussing his second chance after being sacked at Cincinnati in August 2005. His Wildcats players quickly bought into his mind-set, and his offensively challenged team was a hardworking lot that prided itself on its efforts on the defensive end. The Wildcats finished 23-12 overall and 10-6 in the Big 12, and a trip to the NIT ended in a second-round loss to DePaul.

But when Beilein decided to bite on Michigan's bait (and pay his own $1.5 million buyout over five years), it opened up Morgantown, and Huggins returned to his alma mater. It put him back in the Big East and squarely against Cincinnati for some potential payback after the Bearcats administration, notably president Nancy Zimpher, showed him the door.

Huggins said he hadn't thought much about finally coaching in the Big East, a move that was delayed two years after he first sat in a meeting with the league's coaches in advance of Cincinnati's addition to the conference in 2006.

But Huggins is more than happy to be back in his home area, recruiting the part of the country he knows best in Ohio, Pennsylvania and West Virginia. Still, you'd have to be a fool to think he's not relishing playing against the Bearcats and his former assistant, Mick Cronin, who once bolted on Huggins to join rival Rick Pitino's staff at Louisville. The Mountaineers play the Bearcats only once this season (Jan. 30) and, of course, the Big East put the game in Morgantown rather than have the potential issues of a Huggins return to Cincinnati.

What has made it easier for Huggins is how well his players are adapting to his demanding coaching. Huggins said the enthusiasm for practice has never been an issue.

"Defensively I've been hard on them," Huggins said. "They ran a 1-3-1 [zone] and they didn't rebound the ball, so what John did here is incredible. I have so much respect for what he did."

What Beilein did was make the Mountaineers one of the toughest outs in the country. West Virginia shocked the establishment by reaching the Elite Eight in 2005 and then getting back to the Sweet 16 in 2006 before winning the NIT last March and finishing with a 27-9 overall record.

Nichols and Alexander were honest in saying they didn't work much on defense under Beilein. Nichols said they never worked on man-to-man, which isn't surprising since they didn't play the defense.

The difference, at least defensively, is that every drill is competitive, both players said.

"We were never really a good rebounding team -- our technique was bad," Nichols said. "It wasn't a big thing with Beilein. We never concentrated on it."

There's no way a Bob Huggins team is finishing 10th.

Now, under Huggins, Alexander said the players will be in a defensive stance for "a straight hour" in a three-hour practice. That might be a bit of an exaggeration, but you get the picture. Huggins is using more of practice to work on defense and rebounding.

"He's just on us all the time about crashing the boards," Alexander said. "They never stop. I could rebound perfect all practice and miss one, one time, and then they'll yell at me like I've never rebounded before in my life. It's crazy. They're just on you all the time, but it's good for us."

Alexander said he was legitimately concerned that when Beilein left, the Mountaineers wouldn't have a quality coach. Count Alexander and Marquette coach Tom Crean as two folks who don't see West Virginia wilting because of a regime change.

Alexander and Nichols are almost insulted that some think the Mountaineers can't make the transition from Beilein to Huggins. Alexander said Huggins will have more athletes because Beilein recruited more athletic players in his most recent class.

Alexander said Huggins exudes winning. He told them as much when they started practice.

That's why picking the Mountaineers 10th, as the league's coaches did in the annual preseason poll, was a mistake, according to Crean and Alexander.

"To be honest, we could finish near the top," Alexander said. "We've got a really good team. West Virginia notoriously is underestimated, and we still are. This is one of the best teams we've had in a long time."

That is saying something. But this squad can run itself offensively once the veteran players grasp all the options. Well, they have, Huggins said.

And don't expect the players to stop jacking 3-pointers. Huggins said he will push the 3-pointer simply because his players can make them in droves. Originally, his plan was to overhaul the whole thing and continue his driving to the hoop mentality, but that changed when he saw shooters like Nichols (42 percent on 3s), Da'Sean Butler (34.5 percent), Alexander (30.5 percent) and Alex Ruoff (69 made 3s last season).

"He realized that these guys are raining 3s," Alexander said. "It's a kind of combination of his hustle [philosophy], aggressive intensity and our ability to shoot the ball already. There won't be as many backdoors as last year, but the backdoor is still in our arsenal. Honestly, we do it instinctively in practice. It's cool."

So cool that the Mountaineers may be the surprise of the Big East. It was done before under Beilein.

And if the hybrid of the Huggins-Beilein system is a pain to stop, then West Virginia will surprise again.