All Lute Olson owed the University of Arizona team, staff, bosses and faithful fans was a decision about coaching this season.

He did that late Thursday night when he announced he would extend his leave of absence -- that was first announced on Nov. 4 -- for the rest of this season. He said in a school release that he would return next season.

That's all Olson had to do. Multiple sources close to the program told ESPN.com throughout the past month that the players and the staff needed a decision. Olson had just started to come to practice within the past two weeks. As late as Wednesday, he was still actively involved in practices, letting assistant Kevin O'Neill run the practice but adding his input when needed. But the uncertainty of when, or if, Olson would return to coach in a game froze the program.

Now, the team and O'Neill, as the interim coach, can move ahead with the rest of what is still a promising season, especially after last Sunday's comeback win over Texas A&M in Tucson.

Now, it's up to the rest of us to leave Olson, who cited "personal issues" as the reason for his leave, alone.

Multiple sources have confirmed that Olson's "personal issues" are deeply private family matters. One of the matters -- that Olson and Christine, his second wife of four years, are getting a divorce -- was publicized on Friday. The divorce was filed on Thursday night, just before the news was released about his extended leave of absence.

Sources close to Olson have said that there are personal issues beyond the divorce that lead to the leave of absence.

But the reality is that not everything is for public consumption. That may be hard to digest in this 24-hour news cycle where we have this insatiable appetite to know everything about everyone who is in the public eye. But if the matter is with the person's family, then it is not always open to be disclosed, especially if it doesn't involve a public, legal matter. And, according to multiple sources, this is not a criminal issue.

Although the rumors have been rampant, those close to Olson have been incredibly discreet on this subject. Some have shared a bit more than others, but not everyone has been briefed with the full details.

Olson was a private man until his first wife, Bobbi, died of ovarian cancer in 2001. Bobbi, his wife of 47 years, was the matriarch of Arizona basketball. And when she became ill, their private fight with the disease was thrust into the public eye.

Olson has repeatedly put his family ahead of his Hall of Fame career. 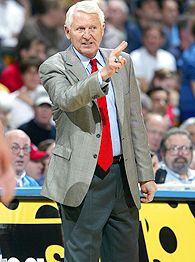 He took a leave of absence to be with Bobbi prior to her death.

When he proposed to his second wife, Christine, he offered to retire from coaching "if that's what it took for us to be together," he wrote in his book "Lute!: The Seasons of My Life".

When he was inducted into the Basketball Hall of Fame in 2002, Olson skipped the ceremony to be at his son Steve's wedding in Italy. Instead, he video recorded a speech that was played at the ceremony.

A year ago, I met up with Lute and Christine for their morning walk in the hills high above Tucson. After the walk, we sat on their porch eating breakfast, discussing basketball, Olson's life, his good health for a 73-year-old man, and his desire to continue coaching for as long as he still had the passion to lead and teach.

All indications throughout the past month have been that Olson wasn't going to retire over this matter. The Arizona assistant coaches were assuring the signed recruits for the class of 2008 that Olson would coach them as freshmen.

Olson's statement on Thursday night that he plans "to return to coach at the University of Arizona next year," has to be taken as genuine. No one has said anything to the contrary.

The school administration understands the severity of the situation. Athletic director Jim Livengood was quite clear when talking about this matter late last week that Olson had earned this time to step away and deal with his family.

Speculation will run rampant that O'Neill was brought in this past May with a lofty $375,000 salary to be Olson's successor. But Livengood, O'Neill, Olson and those close to the program all said no such guarantee was made to O'Neill. O'Neill may eventually be a candidate to replace Olson when that decision is needed, but it is not a foregone conclusion he would succeed the Hall of Fame coach and certainly not in this manner.

But now that Olson has stepped away for the season, O'Neill and everyone else knows that the Wildcats are his team for 2007-08. The questions of an Olson return this season will stop. The questions of why he is gone should end, too, until Olson is ready to talk on the matter.

"I ask for your patience in allowing me the time to attend to my personal situation," Olson said in Thursday's statement. "I am most grateful for the statements of support and prayers that have been offered, and look forward to a return to more normal activities in the months ahead. Thank you again, for your support and understanding.''

Olson has the right to remain private in dealing with this personal matter. All he owed was a decision to step away.