Prosser didn't cry. But the emotion on his face was clear. This was another difficult day in the year since his father suddenly died of a heart attack at age 56.

"There's no question that it's the little things I miss most -- just talking to him, the things you can't do anymore," said the 29-year-old Prosser, who was an assistant at Bucknell the past five years before taking a job as an assistant at Wofford University in June after a coaching change with the Bison. "It's been a very, very hard year, a long year."

Returning to the Milk House on Saturday, the exact place where Mark Prosser was one year earlier when he received the news that his father had collapsed after a morning jog in Winston-Salem and died, was a tough assignment. The memorial service Sunday, organized by his father's former assistants at Wake Forest, was welcomed by Prosser but still not easy to digest. 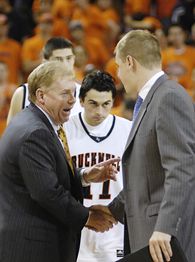 Once the memorial was over and after receiving condolences from a number of head coaches and assistant coaches, Prosser gathered himself and headed to another court within Disney's complex to evaluate more high school basketball talent. It's simply what he does. It's what he did a year ago. It's what his father loved to do, too.

And that is why Prosser was so close to his father. As the younger Prosser was breaking into the coaching profession, he and his father spoke every day. Some days, they talked multiple times.

Prosser needed to talk to his father this spring, maybe more than ever since Skip's death. After Bucknell coach Pat Flannery retired in April, there was a chance that the new coach, Williams College's Dave Paulsen, could have kept Prosser on the staff. But Prosser decided to return to Wofford, where he had been an assistant for the 2002-03 season. Instead of having his father to turn to for guidance on whether to accept the Wofford job or stay at Bucknell, Prosser said he relied on a support group of friends and family.

"The new challenge intrigued me," said Prosser, who was wearing a Wofford warm-up, which is nearly the same light-gold color as Wake Forest's school color. "I'm looking forward to the challenge. It's a similar small school [like Bucknell] with good academics. Hopefully, I'll just keep moving forward in the right direction."

While Prosser was trying to think about the future Sunday, it was hard not to reflect on the past as he sat a few feet away from where he got the two worst phone calls of his life. He pointed to where he was sitting when he received a phone call from Wake Forest University that told him his father had collapsed while jogging and was receiving medical attention.

Dino Gaudio, Skip Prosser's best friend and associate head coach, was also in the Milk House when he received the news that Prosser had collapsed. Shortly thereafter, he received a call that informed him Prosser had died.

Throughout the past year, Prosser has been pleased with the way Wake Forest handled his father's memory. Sunday's memorial in Orlando was yet another example after Gaudio and assistant Pat Kelsey arranged the mass.

"What Wake Forest did was just unbelievable; they did everything.  They were very, very good to us," Prosser said. "They didn't have to do all that."