ATLANTA -- Mike Krzyzewski knows he is coaching a different Duke basketball team. It is among the youngest he has assembled during his 27 seasons with the Blue Devils, with four freshmen, four sophomores and one junior in the nine-man rotation. 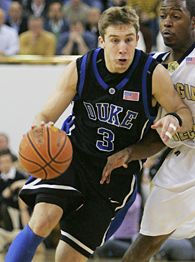 But Duke's inexperience isn't the only reason it isn't winning as frequently or as easily this season. Sophomore Greg Paulus is struggling in his second season as the team's starting point guard. While Paulus has been hampered by a broken foot, illness and a damaged middle finger during the first two months of the season, injuries might not be the only reason he isn't playing well.

Paulus, who started all but three games as a freshman and 12 of the first 15 this season, was benched before Wednesday night's game against Georgia Tech at Alexander Memorial Coliseum.

Krzyzewski also benched sophomore forward David McClure, and started freshmen Gerald Henderson and Lance Thomas. But the lineup changes made little difference in No. 11 Duke's 74-63 loss to the Yellow Jackets in front of a sold-out crowd of 9,191.

"It's a different team," Krzyzewski said, after the Blue Devils lost their second consecutive game and fell to 0-2 in ACC play for the first time since 1995-96. "We have a real young team. We've got eight scholarship guys that are healthy right now and four of them are freshmen. We've got to find a way to win with that combination, and that's what my job is supposed to be, so that's what I'm going to do."

That combination starts with Paulus, whose reputation is one of a gritty, tough player and solid floor leader. But Paulus, a 6-foot-1 native of Syracuse, N.Y., is limited defensively because he lacks quickness and is at best a streaky shooter.

Paulus struggled again against Georgia Tech, scoring six points (four in the final 28.4 seconds after the Yellow Jackets went ahead 69-59) on 2-for-7 shooting with three assists (two in the final 1:38), no rebounds and three turnovers in 29 minutes.

"Young teams have to learn how to win. Just because they're at Duke doesn't mean that they've inherited winning. We've won a lot. You inherit money, or at least some people do. But you don't inherit how to win, you learn that. Our guys have to do that."
-- Duke coach Mike Krzyzewski

Still, Krzyzewski adamantly defends his point guard. Then again, Krzyzewski doesn't have many other options. The only other players who are capable of running the point are junior DeMarcus Nelson and freshman Jon Scheyer, two of the top scorers on a team that is deficient of scoring. The Blue Devils (13-3) have scored 80 points only once in 16 games and fewer than 70 in seven of their last 10.

"He's had a very interrupted year," Krzyzewski said of Paulus. "He started out breaking his foot in the second practice and is out five weeks. And then he comes back and gets [mononucleosis], or close to mono, and he got over that. Then he came back after Christmas and almost breaks the middle finger on his left hand and is out for four days. That has an affect. It's no excuse, because other guys get hurt. But certainly, you'd like the continuity of play.

"But we'll stick with him. We've got confidence in him, as we do all of our kids."

Scheyer, a freshman from Northbrook, Ill., who gained national fame last year by scoring 21 points in 75 seconds in a high school game, ran the point in Paulus' absence. Paulus went on the floor with 16:13 to go in the first half, and then quickly turned the ball over on his second offensive possession. He later threw away a pass on an in-bounds play and missed two open shots when the outcome was still in doubt.

"Coach made his decision, and whatever role I'm in or anyone else is in, whether it's coming off the bench or starting, we've got to do our jobs," Paulus said. "I'm still confident."

Paulus said the injuries affected him earlier in the season, but not anymore.

"It did before, but that was a while ago," Paulus said. "There's no excuses. I'm fine." 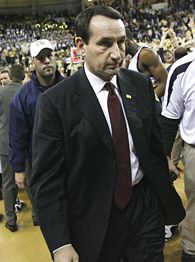 The Blue Devils, who Wednesday played a true road game for the first time this season, seem far from fine. They lost to Virginia Tech 69-67 in overtime in last Saturday's ACC opener in Durham -- Paulus was scoreless on 0-for-3 shooting with one assist and six turnovers in 18 minutes -- and play two of their next three games at Miami and at NC State.

"Our team has struggled to score all season and it's still struggling to score," Krzyzewski said.

Duke lost to Georgia Tech for only the second time in the last 22 meetings, even though the Yellow Jackets went more than 6½ minutes without a field goal in the second half and turned the ball over 28 times in the game.

The Yellow Jackets led 55-45 after guard Mario West made one foul shot with 8:29 to play. But then the Blue Devils scored the next eight points, pulling within 55-53 on Scheyer's layup with 5:28 remaining.

With about 3½ minutes left, Tech guard Anthony Morrow missed a 3-pointer, and Thomas grabbed the rebound. But Crittenton jerked the basketball out of his hands and scored on a dunk, ending the long shooting drought and extending the lead to 57-53.

After that, Duke missed layups on its next two possessions, and the Yellow Jackets scored on freshman Thaddeus Young's reverse layup and Crittenton's three-point play for a 62-53 lead.

"It's frustrating and disappointing," Paulus said. "But we've got to get back and there's a lot of the ACC [schedule] left to play. We can't put our heads down and have to bounce back."

Duke made only 4-of-20 attempts from behind the arc and committed 17 turnovers. Sophomore Josh McRoberts, an All-ACC freshman selection last season, had problems defending Tech center Ra'Sean Dickey, who scored his team's first 10 points and finished with 21 points on 6-for-8 shooting. And Morrow finished with 19 points and made three 3-pointers.

"Young teams have to learn how to win," Krzyzewski said. "Just because they're at Duke doesn't mean that they've inherited winning. We've won a lot. You inherit money, or at least some people do.

"But you don't inherit how to win, you learn that. Our guys have to do that."