WASHINGTON -- It felt just like old times in the nation's capital on Saturday. The top two teams in the Big East squared off at the sold-out Verizon Center, and college basketball once again consumed the city's sports psyche.

There was a Thompson sitting at the end of Georgetown's bench, and there was a Ewing wearing a grey Hoyas uniform on the court. Under the basket, big bodies slammed into one another and open shots and scoring were scarce. 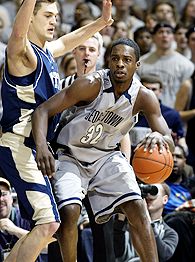 "It was physical, like the old Big East," said John Thompson, the former Hoyas coach who led the small Jesuit school on the banks of the Potomac River to the 1984 national championship and three appearances in the Final Four. "Every game in the Big East used to be like that, with guys bumping and fighting."

John Thompson III, the former Georgetown coach's 40-year-old son, has restored "Hoya Paranoia" because his team embodies many of the characteristics his father's championship teams had: dominating big men, suffocating defense and methodical patience and composure.

The No. 12 Hoyas used each of those strengths in beating No. 8 Pittsburgh 61-53 to take sole possession of first place in the Big East standings with two regular season games to play.

Georgetown has won 11 games in a row (the last loss coming back on Jan. 13 at then-No. 7 Pitt) and will set a school record if its wins its 12th consecutive Big East game at Syracuse Monday night. The Hoyas also would be guaranteed of winning at least a share of their first Big East regular-season title since 1997 if they beat the Orange.

"Today was a very good win against a very good team, don't get me wrong," the younger Thompson said. "You can't be unhappy about the position we're in, but we've still got two games to play."

Every other Big East team is chasing the Hoyas with a week left in the regular season because Thompson III has a player who also would have excelled on any of his father's teams. Forward Jeff Green, a 6-foot-9 junior from Hyattsville, Md., is a throw-back player, who seemingly doesn't do anything exceptionally well and yet does everything for Georgetown.

Going into Saturday's game, Green didn't rank among the Big East's top 15 scorers. He isn't among the league leaders in rebounds, assists or steals. But when the conference hands out its hardware in a couple of weeks, Green should be the Big East player of the year. There isn't a more valuable or versatile player in the college basketball's biggest league.

Green was all over the court when Georgetown needed him most against the Panthers. The Hoyas trailed by eight points with less than 12 minutes to go, but Green, who was hampered by foul trouble in the first half, started attacking the basket. His baseline jumper over Levon Kendall tied the score at 49, and then he showed his versatility with less than 3½ minutes to go.

Following a timeout, Green dribbled near the top of the key with forward Sam Young defending him. Green dribbled the basketball off his foot and nearly lost it, but then got it back. When it seemed he would challenge Young and drive to the basket, Green delivered a pin-point, back-door pass to Jessie Sapp, who scored an easy layup for a 51-49 lead.

With less than three minutes left, Georgetown point guard Jonathan Wallace stole the ball from Young and scored a break-away layup for a 53-49 lead. But Pitt center Aaron Gray, who unexpectedly played after missing the previous game with a badly sprained left ankle, scored on a layup to cut the Hoyas' lead to 53-51 with 2:30 remaining.

Then Green took over the game. He drove the basket and was fouled by Young. Green made both foul shots to give the Hoyas a 55-51 lead with 2:15 to go. On the other end, Green stepped into a passing lane and stole the basketball near the sideline. Before falling out of bounds, Green heaved a pass to Sapp, who streaked to the basket for a layup and 57-51 lead.

"I was just trying to get the ball out of my hands," Green said. "I knew they were coming after me. I saw three of our guys down there and threw it in that direction."

The Panthers didn't get closer than five points the rest of the way and lost for only the third time in their last 17 games.

"We saw him in high school, too, and knew how good of a player he is," Pittsburgh coach Jamie Dixon said of Green, who finished with 14 points on 5-for-11 shooting with four rebounds, three assists and two steals. "It's not a surprise. I've always thought of him much more highly than the general public did. He's an incredible talent with the size and versatility. We tried to recruit him. You don't always get the players you want."

Green, who has attempted more than 15 shots only once in 27 games this season, is the perfect fit for the Princeton offense, which Thompson III learned as a player and assistant under legendary Princeton coach Pete Carril. Green doesn't force shots and always looks to get his teammates involved in the game.

"It's just how I am," Green said. "I'm not the type of player who looks to take 30 shots. It's kind of like that Adidas commercial: 'It takes 5.' I need help from my teammates. I feel like I have a good group of guys who can put points on the board, and I don't have to score 30. I have trust in my teammates."

Green is getting plenty of help from them. Roy Hibbert, a 7-2 junior from Adelphi, Md., rekindles memories of the All-American centers that helped the elder Thompson put Georgetown on the college basketball map. Although Hibbert is not yet as polished as the Hoyas' dominant big men of the past -- All-Americans such as Patrick Ewing, Alonzo Mourning and Dikembe Mutombo -- he is an effective scorer and an intimidating shot blocker.

Hibbert scored 12 points with five rebounds and four blocked shots in his much-anticipated battle with Gray. Gray didn't start the game, but stepped on the court with about 15 minutes to go in the first half. He scored 10 points on 4-for-7 shooting with six rebounds.

"I wanted him to play," Hibbert said. "When he walked out on the court he told me, 'I missed you big Roy.' I told him, 'I missed you, too.' It was a good battle and I can't wait to play him again."

With their two big men on the bench, the Hoyas turned to their guards for direction. Wallace, who has started all 91 games at point guard since arriving as a freshman, scored 11 points in the first half and didn't miss a shot. He finished with a game-high 17 points on 4-for-6 shooting.

DaJuan Summers, a freshman from Baltimore, scored seven points in the first half for the Hoyas. The elder Thompson suggested junior Patrick Ewing Jr., a transfer from Indiana and son of the Hoyas' greatest player, sparked the team with his defensive intensity late in the game.

"A lot of the attention focuses on our big guys, but we're very balanced," Thompson III said. "We can take our big guys out and we're still very effective."

And with less than three weeks before the start of the NCAA Tournament, Thompson believes his son might have something special on his hands.

"My son's team had to get more aggressive," Thompson said. "The kids are maturing and you can see the confidence. It couldn't be happening at a better time."