Only six years ago, Brad Stevens had a 9-to-5 desk job, creating an incentive program for salespeople at an Indianapolis pharmaceutical company.

Stevens was only 24 at the time, and worked with many executives who were much older.

Stevens never knew just how valuable that experience would be.

Stevens, 30, is the second-youngest head coach in Division I entering the 2007-08 season. Dane Fife, coach at Indiana University-Purdue University at Fort Wayne, is 28. 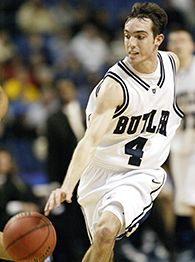 Butler athletic director Barry Collier, a former basketball coach at the school, waited only three days to name Stevens the Bulldogs' new coach. Collier said he interviewed each of the three assistant coaches from Lickliter's staff and had conversations with a couple of outside candidates, but interviewed no one else.

"I didn't know what direction Barry would go," Stevens said. "I just knew Butler was a great place to be. I was just hopeful I would be considered because of the type of people we have here."

Stevens' relatively young age and inexperience didn't hinder him in the hiring process, because his résumé included a much more important attribute, according to Collier. Stevens worked the past six seasons at Butler, learning the system that made the Bulldogs one of the most successful mid-major programs in the country during the past two decades.

And it didn't hurt that each of the last two Butler coaches -- Lickliter and current Ohio State coach Thad Matta -- were highly successful after being elevated as assistants. Matta worked under Collier, and Lickliter worked for Matta.

"I had basically eight months to interview Brad," Collier said. "By that, I mean I got to observe him with the team in practice, on the road and in games. Age wasn't a factor because I'd seen his ability shine through during the course of the season."

To say Stevens has been on college basketball's fast track would be a gross understatement.

While working in the marketing department of the pharmaceutical company, Stevens volunteered as a scout at an Indianapolis high school and coached an AAU summer team. A former player at DePauw University in Indiana, Stevens had a strong desire to stay involved in basketball.

When Stevens decided to try coaching full-time -- "When heart sense took over common sense," Collier joked -- he contacted Matta. Stevens had been working Butler's summer camps while playing at DePauw and learned from Collier and Matta. Stevens was hired as Butler's coordinator of basketball operations before the 2000-01 season, which was mostly an administrative position. When Matta left for Xavier the following summer and Lickliter was hired to replace him, Stevens was promoted to the third assistant job.

"Seven years ago, he was an eager young coach, who would do anything and everything to progress in the profession," Matta said.

When Stevens set out to hire his coaching staff, he remembered the opportunities he was given early in his career.

"There were a lot of people looking out for me," Stevens said.

So Stevens looked out for the people he knew and trusted. He retained Butler assistant Matthew Graves from Lickliter's staff. Graves, the older brother of Bulldogs star A.J. Graves, has worked six seasons at Butler, two as coordinator of operations and the last four as a full-time assistant. Graves, 32, also was a star guard at Butler, leading the Bulldogs to back-to-back NCAA Tournament appearances in 1997 and 1998.

"The thing about all of those guys is they all have experience at Butler," Stevens said. "They know what we're trying to do and they're all really well-liked. They all do a good job. I couldn't be more blessed to have those guys stay around and be a part of it."

Stevens said he considered hiring an older, more-experienced assistant for his bench, but believed coaching experience at Butler was more important.

"There were a lot of things to consider," Stevens said. "But one of the most important things I looked for, and the thing all of those guys have, is the experience here. They know how we like to do things and the type of guys we're looking for in recruiting. They know the system when we get on the floor and we're coaching our guys. I've had a lot of advice from people who I consider to be really good in the coaching industry, and those are the things they told me to do when hiring a staff. I feel really fortunate with the staff we were able to put together."

I think Brad understands the Butler way. Lots of decisions have to be made and you have to adjust to your own personnel, which is ever changing. But the system is not broken and we don't want to start fixing it at this point.

Matthew Graves, who shared an office with Stevens when they were low-paid assistants, believes Stevens is ready to take over the Butler program.

"I think his ability to relate with the players is a big bonus," Graves said. "Sometimes people get hung up on years of experience or years of head coaching experience. But when it comes down to it, it's about relationships with your players and your staff. Brad will have a great relationship with not only his players, but the guys on staff. That's going to enable him to be very successful."

Stevens inherits three starters who helped lead the Bulldogs to their best season ever in 2006-07. Butler finished 29-7, setting the school record for victories in a season, and advanced to the Sweet 16 of the NCAA Tournament. The Bulldogs were ranked in the ESPN/USA Today coaches' poll for a school-record 16 consecutive weeks after beating Notre Dame, Indiana, Tennessee and Gonzaga en route to winning the NIT Season Tip-Off.

A.J. Graves, an honorable mention All-American last season, returns after averaging 16.9 points and making 98 3-pointers. Guard Mike Green, a transfer from Towson, also is back, along with Clemson transfer Julian Betko, who averaged 4.3 points and 2.0 rebounds after transferring from Clemson.

Butler must replace starters Brandon Crone (11.4 points, 4.7 rebounds) and Brian Ligon (3.4 points, 3.2 rebounds). The Bulldogs will have five seniors, no juniors and seven freshmen and sophomores, six of whom have played very little in college.

Butler's schedule is once again ambitious. The Bulldogs will play nonconference games at Southern Illinois and against Florida State in Indianapolis. They have home games against Bradley, Indiana State and Ohio State and will play in the Great Alaska Shootout, an event that includes Gonzaga, Michigan, Texas Tech and Washington State.

"I hope we can pick up where we left off, but you never know," Stevens said. "A lot is dependent on how the young guys pick up the system and how the older guys are able to incorporate them and bring them along. It's hard to predict what's going to happen from game to game, but we do like the pieces that are here. The most important thing to us is they've done a great job on and off the court and that's what we're going to continue to try to do."

A.J. Graves, already in the unusual position of having his older brother as an assistant coach, said the Bulldogs won't have many problems adjusting to Stevens as a head coach.

"It will take some time," Graves said. "You look at an assistant coach a certain way and your head coach a different way. There's more fear involved with the head coach. But I think everybody is going to trust him and we're going to follow what he puts out in front of us."

The Bulldogs will be following the blueprint Butler put in place several years ago: Take care of the basketball and defend like crazy.

"I think Brad understands the Butler way," Collier said. "Lots of decisions have to be made and you have to adjust to your own personnel, which is ever changing. But the system is not broken and we don't want to start fixing it at this point."