Say what you want about the RPI and
strength of schedule and conference record and all those things our
bracket guru Joe Lunardi has bouncing through his head. On the day
before the Irish hosted then-undefeated Boston College, Brey was talking
buzz.

"It counts more than the math," Brey said Monday. "There's a
buzz about them being 20-0. That would be a helluva win on our resume."

After playing in the NIT a year ago,
there has been a lot of talk from the Irish coaches and players about
getting back to the NCAA Tournament. It's been the team's No. 1 goal
this season. While the victory over Boston College certainly helps Notre
Dame, there is still work to be done.

After all, a 14-6 overall record, a 6-4 mark in the Big East and an RPI of 40 is still pretty much the definition of a bubble team.

The Irish, however, have a chance to change that.

As this college basketball season enters the final month of the
regular season -- only 32 days of hoop watching remain until Selection
Sunday -- many teams don't control their own destiny. Sure, everybody
except for the Ivy Leaguers have a chance to win their conference
tournament, but not a lot of teams can pick up eye-catching victories
and play their way into the Tournament. 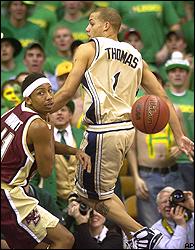 That's what makes Notre Dame's situation interesting. If the Irish
and Marquette get in, the berths clearly will be
earned. If they don't and make a return trip to the NIT, they will have
had their chances.

Because even though Notre Dame has played Connecticut, Syracuse and
Boston College in the past 11 days, the slate of games that Brey
describes as the Big East's A-plus schedule doesn't let up. This
weekend, the Irish play at Pittsburgh and the rest of the schedule reads
like this: vs. Georgetown; at Providence; at Connecticut; vs. UCLA; vs.
Rutgers and a home game against the Panthers.

As Selection Sunday approaches, expect to hear Brey talking up Notre
Dame's Big East schedule, one he touts as the toughest of any team in
the league. He has a point -- the five league opponents Notre Dame plays
twice this season are: Syracuse, Connecticut, Pittsburgh, Villanova and
Georgetown. Those teams are currently a combined 81-23 this season.

No other Big East team plays five opponents with a combined record that
good. By comparison, Syracuse's five are 63-39; Pittsburgh's are 71-33;
Connecticut's are 74-31; Villanova's are 69-35 and Boston College's
opponents are a Big East-worst 55-46. That's much of the reason why Brey
thinks a 9-7 or even an 8-8 league record (along with a decent showing
at the Big East tournament) should be enough to get the Irish their
third tournament invitation in the past four years.

Outside of conference play, Notre Dame lacks a truly marquee victory.
The Irish have a victory over Indiana along with a loss to
Michigan that looks worse now than it did back in December. If Notre Dame has something in its favor, it is that this is pretty much a repeat of a year ago. Last season, the Irish played Pitt, Connecticut (three times), Syracuse and Providence
(when they were good) at the end of the season, winning two games against ranked opponents.

At the same time, Brey thinks this Irish team is better than last season's
for three simple reasons: Torin Francis, defense and balance.

A year ago, Francis missed the final eight games of the regulars season, the Big East tournament and the NIT because of a back injury.

Brey also thinks this group is his best defensively since taking the Notre Dame job. Opponents are scoring only 60.3 points per game against the
Irish, second-best in the Big East. In Tuesday's victory over Boston
College, the Eagles never looked truly comfortable against Notre Dame's
zone.

The BC game was also an example of Notre Dame's newfound balance.
While this is still Chris Thomas' Irish team, the senior guard no longer
has to do everything. A year ago, if Thomas didn't score, Notre Dame
didn't usually win. Thomas' scoring average is down by about six points
per game this season, but he's third in the Big East in assists. That's
the result of Notre Dame having more options. Colin Falls (seven
three-pointers against Boston College) is scoring more, as is Chris
Quinn. Inside, Arizona transfer Dennis Latimore is taking some of the
pressure off of Francis.

"Chris (Thomas) is probably the most overanalyzed player by our fans and media,"
Brey said. "Maybe he stayed in (school) too long ... But this year he
feels he can quarterback and distribute more because he's got more help
around him. The big guys have gotten in a rhythm.

"I think a point guard should be measured like coaches -- by wins and
losses. We had never been a player in the Big East until this guy got
here."

Now, in the stretch of his senior season, Thomas will try to get Notre
Dame back in the NCAA Tournament. Can it happen? The Irish will
certainly have their chances.

MARQUETTE IN SAME SITUATION
While Notre Dame will work its way through the heart of the Big East, Marquette is facing a similar situation in Conference USA.

If the season ended today, Tom Crean's team -- at 16-6
overall, 4-5 in Conference USA and No. 62 in the RPI -- would be very
uneasy watching the selection show. Marquette, though, has a chance to play
its way into the field after going to the NIT last season.

Tonight's game at TCU is the beginning of a key stretch for the Golden
Eagles. After playing the Horned Frogs, Marquette has games at East
Carolina (a difficult venue), against Louisville, against DePaul and at
Cincinnati.

One thing in Marquette's favor is the improving health of point guard
Travis Diener. Diener, who Crean said hasn't been fully healthy since
Dec. 6, came off the bench in Saturday's victory at Southern
Mississippi.

"Hopefully he'll continue to get better," Crean said. "He's such a big
part of our team."

Jeff Shelman of the Minneapolis Star Tribune (www.startribune.com) is a regular contributor to ESPN.com.