The circus landed in Huntington, W.Va., this week, and it's walking the halls of Huntington High as we speak. O.J. Mayo, the prep star whose wanderings are as famous as his hoop skills, transferred yet again, this time back to his hometown. He brought along hangers-on, handlers and his family, related by both blood and money.

As he adjusted to his new/old surroundings, smiling for the reporters who followed him there, the folks in West Virginia considered this Christmas present delivered early.

"We have not moved in any direction," Cabell County superintendent William Smith says. "I haven't had a chance to even do a debriefing with the principal. O.J. just enrolled yesterday."

As they begin to plan, everyone else, in Cincinnati and Huntington and beyond, asks the question: Why? Why would the top-ranked basketball player in the country, a two-time Mr. Basketball of Ohio, leave his high school the first week of his senior season? 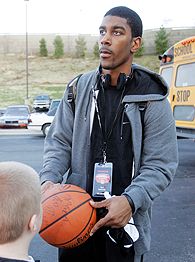 "I can't give you an answer," says Joe Nickel, athletic director at North College Hill, Mayo's former school in Cincinnati. "Him and his family decided they wanted to go back so" -- he pauses -- "they could be closer to family. Um, I probably knew a little bit in advance. The family had been corresponding with the basketball coach and myself. We were aware. Um, it's really a family issue. I don't think I should be talking about family decisions."

That's a common theme. Everyone knows Mayo can leave defenders wobbly kneed. But you might not know that he also has the power to stop the Cabell County Public Schools spokesman from speaking.

"As far as the student enrolling," Jedd Flowers says, "let me say this to you, his mother has asked us not to discuss the fact that he's here. So I can't really talk about it. The parents have the ultimate right. Students have a right to privacy."

Smith noticed a bit of irony here. Someone who has been on the cover of magazines wanting privacy.

"She said she didn't want the media hype," he says. "I got tickled. He's already talking to USA Today."

So, family is one possible reason. He's from there, and his mother, Alisha, lives just up the road in South Point, Ohio.

"In my opinion, it seems to be the most logical conclusion of a situation that didn't end the way he wanted," says Sonny Vaccaro, Reebok's director of grassroots basketball and a de facto adviser to Team Mayo. "It was the easiest thing to do. It was the easiest thing for the young man to do after all the things that happened at North College Hill. We all go home again."

There are other possible theories, some innocuous, some less so:

• Bill Walker's ineligibility. Mayo and Walker, the second-ranked player in the country, were best friends and teammates at North College Hill High in Cincinnati. Walker was declared suddenly ineligible in July. Turns out he already had played four high school seasons. Without his friend and partner, Mayo wanted out, according to the Cincinnati Enquirer.

• Friends. Though he's been to two different schools since leaving Huntington, and flirted with others, Mayo often came home to visit. He could be seen in the stands for Friday night football games and he played AAU ball with several of his new teammates during the summer. He was always around town. Smith said he saw him over the summer while moving his son into a dorm at Marshall.

• Recruitment. Flowers said Huntington High in no way recruited Mayo to come play for its already successful team. "Like the superintendent told us," Flowers says, "if he came, we'd be glad to accept him." 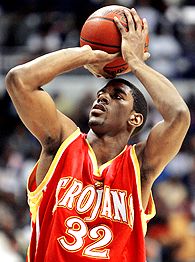 • Other, more nefarious, reasons. The jokes flew around the high-level basketball world about what it must take to get Mayo to come to your school. Huntington head coach Lloyd McGuffin said he knows rumors are out there, but he and his staff won't spend time shooting them down.

"I really don't have to do any explaining," he says, "but you're always going to have a few people who are cynical, but to tell you the truth, we don't even waste our time thinking about that."

Regardless of why, Mayo is in Huntington, and for a lot of people, that's really good news. Many benefit. Mayo himself, who is back around his closest friends. McGuffin benefits. He's already heard the cracks.

"You'll have people say, 'You hit the lottery,'" he says.

The school is excited. Education budgets are being cut around the country. It's virtually impossible for a school district to invent streams of revenue. Unless, of course, you have an elite basketball team. So, while they are stressing a bit about finding a bigger gym and better opponents, they are definitely hearing the "cha-chings."

"The principal is excited about the door money," White says.

They've got a few months until the season begins. Practice starts Nov. 12. They'll be busy until then; a game with Oak Hill is already in the works.

Preparing for the circus takes time. Just ask the folks at North College Hill. They had a taste. Nickel knows about 16,500 people packing a gym. He knows about $50 tickets and games in California. Not long ago, he was in the process of ordering real, college-style tickets. In the old days, they just used rolls of strip tickets. Like a high school should.

So when Mayo left North College Hill, Nickel felt a lot of emotions. One of them was relief. A local newspaper writer named Tom Groeschen, who'd covered the Mayo/Walker years, wished the Huntington reporters luck. That got a laugh out of Nickel.

"We just have the little tear tickets," Flowers says. "We're still pretty traditional. I don't foresee that changing too much."

Wright Thompson is a senior writer for ESPN.com and can be reached at wrightespn@gmail.com.