INDIANAPOLIS -- The largest BracketBusters weekend in the event's five-year history is now in the books, and we're all a little more knowledgeable about the mid-majorsphere than we were on Friday morning.

We know now that this year's CAA is a legitimate two-bid threat, that the vaunted Valley most likely won't match its four-bid performance of 2005-06, and that there are teams in media-underserved leagues such as the Big South and SoCon that want to seriously bust up your office pools. Let's take a sentimental look back on some of the highlights and lowlights of our annual mid-major hoops festival.

BracketBoosters: Three of the four top Colonial Athletic Association teams won, giving the league an important multibid boost. It was mentioned in this space Friday that Drexel would need a superhuman effort to overcome Creighton and its sellout crowd, and that's exactly what it got in its key come-from-behind 64-58 road win. In a game marked with bizarre officiating and even more bizarre handmade arena signs, the Dragons shut down the second-best team in the MVC, holding the Bluejays to 35 percent shooting and chaining post threat Anthony Tolliver to the foul-trouble pole. Along with Hofstra's 65-64 home nip of Holy Cross and Old Dominion's 73-70 victory at MAC West leader Toledo (the Monarchs' ninth straight win), the "Atlantic Valley" was the weekend's big winner.

A two-bid CAA was but a pleasant pipe dream a month ago, but now it's nearly impossible to structure a logical construct that could disprove that Virginia Commonwealth, ODU, Drexel and Hofstra are currently fighting over at least two NCAA berths. VCU, ODU and Hofstra are held back by nonconference performances that were not quite elite (though that 75-62 ODU win at Georgetown on Nov. 19 is looking better every day), but it's hard to discount Drexel's road résumé -- its 12 wins away from its West Philly home have the Dragons tied with Vermont for the nation's lead, and they've added Creighton to a victim list that includes Villanova, Syracuse and Temple. One of the most important qualities of an NCAA-caliber team is the ability to win in hostile environments against good teams, and Drexel has proved itself more than worthy in that respect.

BracketBruised: Ever since Creighton and Southern Illinois used big home wins in the inaugural 2003 Busters (over Fresno State and Wisconsin-Milwaukee, respectively) to boost their eventual seed numbers, no other conference has leveraged the event as successfully as the MVC. The Valley went 5-5 this weekend, but it was the league's second division that picked up the bulk of the wins away from the TV lights; most Valley NCAA hopefuls found their hopes damaged or dashed altogether.

The Butler-beating Salukis (68-64 at Hinkle Fieldhouse) -- with their top-10 RPI, national ranking, 23 overall wins and nine-game win streak -- are an NCAA-caliber squad no matter which way you look at them, but we learned all sorts of bad things about some of the other Valley contenders this weekend. Mo-State has an allergy to skilled speed, Creighton has troubles without Tolliver, and the gas tanks are about empty at Wichita State and Northern Iowa (79-64 loser at Nevada). If you're still holding out hope for four bids, remember that last year's quartet of NCAA participants went 2-2 in the 2006 Busters, with SIU and Wichita losing at home.

BracketBelievers: The Big South's Winthrop made the most of its time in the spotlight on Friday night in Springfield, Mo., using an offense that resembled a precision Swiss timepiece to make the Missouri State defense resemble Swiss cheese. The Eagles torched their hosts for 77 points on 66 possessions (1.16 points per possession), an exploitation of the Bears' D that no team other than Southern Illinois (1.39 points per possession in a 76-56 win at Carbondale on Jan. 13) has been able to match.

Wichita State is glad that Appalachian State of the SoCon is so gone, because the Mountaineers were rude guests when they visited the Roundhouse on Saturday. App-State held its host to 33 percent shooting in the 60-58 win, and showed its flexibility when star guard D.J. Thompson struggled, notching only eight points on 3-for-10 shooting. Donte Minter, the 6-foot-8 Virginia transfer who's been an excellent example of college basketball's trickle-down effect, picked up the scoring slack with 19 huge points on 9-for-11 shooting from the floor.

The message should be clear to anyone who was watching: The mid-major world is not limited to the Colonial, the Missouri Valley and the WAC. There are solid teams in low-RPI conferences that can play ball with anyone, and while teams such as App-State and Winthrop are still not quite at-large locks, they are legitimate threats to win NCAA games when they get there. And if and when they do, they'll help prove that there really is no such thing as a "low major." 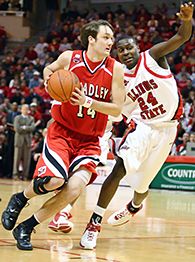 BracketBradley? If it does somehow turn out to be a two-bid Valley (unleashing a torrent of misguided "what went wrong" stories), don't be shocked if the lucky pair is Southern Illinois and current fourth-place Bradley (19-10, 9-7 MVC). While Creighton, Mo-State and Wichita looked sluggish as they failed to protect their homelands, the Braves went on the road and beat the CAA's top team (VCU). Scrappy and speedy Bradley, led by Jeremy Crouch's 22 points (on 8-for-11 shooting), shot 11-for-23 from behind the arc and hit half of its shots overall in the 73-64 win over a Rams team currently lording over the CAA at 14-2.

If you're a longtime MVC fan or have been following along with ESPN's increased coverage this year, you know all about the intensity inherent in every league contest -- teams simply beat each other up for two months, and the conference tourney winner is the team that still has the ability to walk upright. One of the reasons for Southern Illinois' improvement from its 2005-06 squad is its sacrifice of some of its in-your-pants perimeter defense; the result is more energy for its motion offense. So even without NBA early entrant 7-footer Patrick O'Bryant, Bradley's circumstantial emphasis on speed and fresh legs this season may, in fact, leave it better equipped to survive the Valley Wars than last year.

And consider this: Last year's Sweet 16 Braves snuck into the NCAAs as a No. 13 seed by moving from 7-7 in the league to the Valley title game, a seven-game win streak that ended in a 59-46 loss to SIU in St. Louis. The 7-7 Braves of 10 days ago now have won three straight and will close out the MVC season at home with slumping Northern Iowa and Indiana State. Bradley's margin for error is just as narrow as it was last year, but if it's able to repeat last year's feat -- a five-game run, two wins in St. Louis and a loss in the Arch Madness final -- could the selection committee seriously shut the Braves out?

BracketSmackdown: While they won't get an RPI boost from their performances, a couple of potentially dangerous dark horses were on display Saturday night. Brad Brownell's Wright State Raiders, a full game up (tied in the loss column) on nationally known Butler in the Horizon League, shut down the Big West's leading scorer, Cal State Fullerton's Bobby Brown (19.8 ppg; just 12 points Saturday), and the rest of the Titans in a 77-62 pullaway win. And New Mexico State, a couple of footsteps behind nationally ranked Nevada in the WAC at 9-3 (20-6 overall), beat Ohio of the MAC 77-72 in a game of streaky runs in which it seemed that one team always was on an extended scoring blitz. If you were up at 2 a.m. ET Sunday morning, the offensive sugar rush probably kept you up for the rest of the night.

Some conference high-fliers weren't quite as awake. In a cold reminder of the relative strength of leagues, an Austin Peay squad that's four games clear in the OVC loss column with a 15-2 league record was dismantled by MAC-best Akron in a 74-57 second-half shutdown. And Long Beach State, coming off a three-win road trip to take control of the Big West at 9-2 (18-7 overall), made an errant decision to press Hawaii all night, believing that its guest was tired from a week of inter-Pacific travel. Hawaii wasn't -- the Rainbow Warriors won going away, 93-78.

BracketBlackout: Unfortunately, there weren't enough ESPN crews and cameras to go around on Saturday, leaving 37 games in the dark. That doesn't mean that the non-televised portion of the day wasn't worth watching -- some of the more exciting action occurred here. Eastern Washington's Rodney Stuckey scored 14 points in the last 11 minutes (30 in total) during a 71-70 win at UC Santa Barbara's Thunderdome, and in a battle of two 2006 NCAA teams depleted by key graduations, Pacific used an Anthony Esparza drive with 14 seconds to go to overcome the Big Sky's Montana.

But the most thrilling radio-only BracketBusters game occurred between two teams that still may end up in the NCAA's Big Bracket a month from now. Homestanding Tennessee Tech, tied for second in the OVC, defeated first-place East Division Southlanders Northwestern State 84-85 in a seesaw overtime battle. In addition to seven double-figure scorers (including Tech's Belton Rivers with 35), there were 17 ties and 20 lead changes. The final scoreboard switch came on an Amadi McKenzie slam with five seconds to go in the extra session, a dazzling dunk that sent the Cookeville crowd into 'Buster bedlam. Sorry you weren't able to see it.