It was early January 2006. The University of Texas had just wrapped up its football championship in dramatic fashion against USC in a game for the ages, and college fans' attention turned to basketball conference races that had just begun. In the midst of all the New Year's hullabaloo, the NCAA quietly introduced a rule adjustment that would soon result in a drastic change in the way college basketball would be played -- in November and December, anyway. 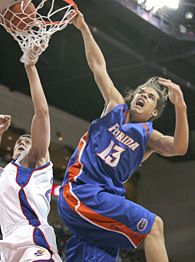 Gone forever was the 6-year-old "two-in-four" rule that limited schools to two appearances per quadrennial in so-called "exempt" tournaments, which allowed up to four contests to count as a single regular-season game against a maximum of 28. In its place was the new concept of "multi-team events" (or MTE for short), which have much looser restrictions; schools can't play in the same multi-team event twice over a four-year period, but any school may now participate in a MTE every season if it so chooses.

The impact of the new rules on scheduling were dramatic and led to a surge of new Classics, Challenges and Shootouts. When the curtain lifted on the 2006-07 season, the number of named, multi-team preseason events had increased from 36 in 2005-06 to a whopping 58. And with the addition of even more fledgling events for 2007-08 -- with names like Philly Classic, Glen Wilkes Classic and Blue Ribbon Challenge -- college basketball's preseason has become a promoter's paradise.

"It's like the wild, wild West now," said Sport Tours International president Lee Frederick, whose company has operated the San Juan Shootout and other tournaments for more than two decades. "It's a lot better than it used to be for people like us, but now everybody and their dog who can spell 'basketball' is starting a tournament now."

And along with canine grammar miracles has come a new math. In the multi-team event era, the maximum 31-game regular-season schedules are becoming the rule rather than an occasional luxury. Utah State -- playing in the exempt South Padre Invitational and its own non-exempt Gossner Classic -- will play 32 regular-season games.

A major contributing factor to the stuffed slates is the rise of the "hybrid MTE," or Olympic format tourney, which generally feature four high majors and four smaller schools. Campus-site games are played under the event's banner, culminating at a central location for the remainder of the tournament. The first event of this kind was the 7-year-old Las Vegas Invitational, and the format has caught on quickly: No fewer than 10 hybrid MTEs dot the 2007-08 early-season schedule.

"I didn't really come up with [the format] per se," said LVI founder and Basketball Promotions president Chris Spencer, who also operates the South Padre Island Invitational and Chicago Challenge Invitational. "The preseason NIT, for instance, has always had games at the big schools first, and then the four winners go on to the next round. The only innovation of mine is that all teams that play in my events go to the final destination and get their four games. So that's the attractiveness of this format over some of the others. Everybody gets their full complement of games, no matter what."

If we can put on a college basketball tournament with games that matter in the middle of college football season, then we're doing a good job.

With this setup, the big boys may find themselves upset at home -- as was the case in last year's Chicago Challenge, when Rutgers fell to Jackson State at the friendly RAC -- and they aren't "eliminated" from advancing to the central site to play out the string. And when hosting tourney games against mid-major opposition, the four "home teams" are able to offset their tournament participation fees with gate receipts. In addition to a paycheck for participating (funded by the major schools' entry fees), the format offers smaller schools a level of on-court comfort that direct negotiation with the big schools can't: Tournament organizers assign the officials to campus-site games, instead of the referees from the home team's conference that usually work those assured blowouts.

"When you do money games, you're going into a place where they're concentrating on putting on a show, to beat you," said Cleveland State head coach Gary Waters, whose Horizon League Vikings will kick off Sport Tours' inaugural Glen Wilkes Classic with a game at South Florida before moving on to Daytona Beach for three games. "In my estimation, we get the best of all worlds being in an tournament event like this.  We get funded, we get to play on neutral courts, our kids have a greater chance to be competitive, and it prepares us for the kind of atmosphere we'll see in the postseason. All these things help."

And there are still plenty of preseason tournaments with exotic locales and more traditional bracket structures -- such as the Great Alaska Shootout and the Rainbow Classic in Hawaii -- with roots in the 1960s when the NCAA offered its initial exemptions to help ease the scheduling problems of non-mainland schools. Mid-majors looking for headline-grabbing upsets don't have to look much further for inspiration than Appalachian State, last season's San Juan Shootout champion. The Mountaineers toppled Virginia, Central Florida and Vanderbilt on the way to a school-record 25 wins. The performance in Puerto Rico helped the Southern Conference team build a national nonconference strength of schedule rating of No. 4, and only a few ill-timed losses down the stretch kept it from serious NCAA Tournament consideration.

"That tournament gave us the chance to see what our team was capable of, and we continued to build on the momentum and confidence it brought us," said Appalachian State head coach Houston Fancher, whose team will participate in a hybrid MTE at Middle Tennessee State this season. "I think these preseason tournaments are beneficial for teams at our level, because they give us the chance to play higher-level teams on neutral courts, and that's the bottom line. San Juan was an opportunity to play teams that aren't going to come play us at home. We're never going to get an ACC or an SEC team to come play us in our building."

But widespread MTE fever has endangered some of the four-team, weekend-long preseason events -- mini-tournaments like the Marist Classic and the Cable Car Classic at Santa Clara. Held at small gyms and organized by the host school, these were never labeled exempt, counting as two games against a participating team's schedule. Utah State's Gossner Classic ran for 12 years but didn't get off the ground last season because head coach Stew Morrill couldn't find three other schools to come to Logan. With teams getting four for the price of one elsewhere, two games for two just didn't seem worth the trip.
This year, with even more exempt tournaments, the Gossner field was only able to include Furman, Northern Arizona and Utah Valley State.

Cozy holiday tradition isn't the only potential casualty. In an age of 31-game regular-season schedules, 20 victories -- once the undisputed benchmark of a successful year -- now means less than ever before. In the 10 seasons between 1996-97 and 2005-06, there were an average of 81 20-win teams per season. But in the first year of the MTE era, a record 107 schools achieved the plateau. That's nearly one-third of Division I, 10 more teams than can fit in the NCAA Tournament and NIT combined.

"Coaches still think it's important, we all want to reach 20," said Fancher, even though his team's 25 wins didn't get it in the NCAA Tournament last season. "It'll probably always be a benchmark for us. We'll feel good about reaching that level. But when you're looking back on number of wins in a season now, I don't know how much weight it really carries anymore."

The tournament market will eventually sort itself out as promoters battle each other, as well as the NCAA-owned NIT Season Tip-Off, for teams. But the trend is unmistakable and, perhaps, irreversible. Poorly organized and non-profitable events will fall by the wayside, but fans can expect many more preseason tournaments in the future with complicated bracket setups and unfamiliar names. But as long as the surviving events are mutually beneficial to all involved schools, the TV partners, the promoters and fans (and add levels of intrigue to the story of the season as well), the positives of the MTE explosion could likely outweigh the negatives.

"We try to put on events with good teams and good matchups that will attract people's attention," said Frederick of Sport Tours. "If we can put on a college basketball tournament with games that matter in the middle of college football season, then we're doing a good job."