With a three-year extension on the table at Texas Tech, with his loyalty to AD Gerald Myers, this is a long-shot, but the rest of the sport should be rooting for it. Because NCAA basketball is sick. It's dying. Worse, it's putting people to sleep. The players are gone, one in the rising generation of coaches is just like the next in the assembly line, and college basketball could do worse than having Knight in the chase for a national championship again.

This isn't to suggest that Knight isn't flawed, that he hasn't lost his mind too often through the years; it is entirely possible he could embarrass Ohio State with his bad manners. Yet, with who's taken over college basketball, with the frauds and crooks and hoodlums running loose on campus, I'll live with Knight's flaws.

If you want a clean program, want kids graduating, want to win, well, run the risk that Knight has learned his lessons. He isn't right for every school, but Ohio State is different. It's home. The Buckeyes should gamble that Knight has learned his lessons, paid a penance and would treat a chance to get back in the national championship race, back in his home state of Ohio, like a precious gem. 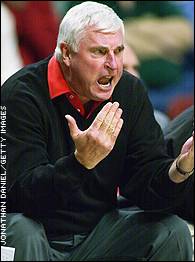 All of that won't be an easy sell to the blue bloods operating Ohio State. This sure wouldn't be Ohio State athletic director Andy Geiger's style. Already, one of the top names for the job is N.C. State's Herb Sendek. Nice guy and all, but come on. Sendek? Good luck selling that in the shadow of a national championship football program.

Listen, Ohio State won't be Fresno State, desperate to bring back shamed alum Jerry Tarkanian, nor Oklahoma State doing it with Eddie Sutton. Ohio State doesn't see itself as some renegade operation, grateful that a fallen star with the school's degree on his wall would stoop to ending his coaching career there. Ohio State will believe it can get a major coaching star. Only, there isn't a bigger coaching star available than Knight, who's proved his genius all over again at Texas Tech.

He needed to be shook on a lot of levels, and his firing at Indiana did so to his core. It didn't just get him behaving better, but working harder, working wiser, to win again.

At the end in Indiana, his obsession was self-preservation. At the end, he was just a caricature of himself. Now, he probably still has some championship coaching left in him. What he's done there has been remarkable, but that's all he can do there. Get some good JUCO's, get 20 victories, and get to the NCAA Tournament. He maxed out the job at Texas Tech. That's all there's to bleed out of that program.

Ohio State gives him access to top Midwestern high school talent again. It wouldn't be long until the Buckeyes were back in the top 20, chasing Final Fours. And it isn't just college basketball and the Buckeyes that could use Knight, but the Big 10.

The Big 10 used to be a coach's conference. It had characters.