HARTFORD, Conn. -- One of the first things you notice, when looking closely, is their socks don't match. One guy is in black socks, another in stripes. A few guys in high socks and a few guys in short socks: new socks and old socks, in various shades of white. It's a minor detail, but the lack of uniformity to the uniform is a dead giveaway: This isn't really a team.

Rather, the Beltway Ballers are a ragtag collection of former college and JC players from the Baltimore area. They don't know each other very well; they play together only on occasion, mostly in local scrimmages and pro-am tournaments. And they have never met an NCAA team in an exhibition game.

But on Nov. 13, they faced college basketball's No. 1-ranked team, one whose fit, young bucks towered over the slow, frumpy Ballers.

On Sept. 22, according to a copy of the contract obtained by ESPN.com, the University of Connecticut agreed to pay $22,000 to the Ballers -- a team that belongs to the Cecil Kirk Athletic Council, a group that also sponsors the AAU team that features one of the nation's top-10 prep recruits, Rudy Gay of Capitol Heights, Md. And, during the early signing period in November, Gay announced his intention to sign with the Huskies over Maryland.

"If that's how we got a kid, that's a sad commentary," Calhoun said, when asked after the game about the paid guarantee. "We got Rudy Gay because we recruited him for two years."

It was only an exhibition -- one of hundreds that Division I teams throughout the country played once again this November. But as the regular season begins, the Ballers' visit to Hartford, Conn., is still creating headlines not only on the East Coast, but nationally via the Internet and radio. It's also created a potential rift between two potential Hall of Fame coaches who have won two of the past five national championships -- Calhoun and Maryland's Gary Williams.

Connecticut called the Beltway Ballers to play the game. Maryland chose not to this season. But Williams' comment to the Baltimore Sun following a loss to an NBDL team has set off a war of words.

Williams' quote -- "We could have scheduled an AAU team and given them $25,000 like some schools I know" -- didn't directly mention UConn, but Calhoun certainly took it as a shot at his choice of exhibition foe. Williams referenced "schools." But Calhoun's response deemed irresponsible any assumption that the exhibition was indirectly connected to Gay's decision. Calhoun said the Huskies simply out-recruited the competition to get Gay.

"We try to find every angle we can get to get a player," Connecticut assistant coach Tom Moore said. "We were sweating that (Gay) would still go to Maryland down to the end, regardless of that game. We're doing everything within the rules. No one will lose sleep at UConn if these games are taken away. We'll still get players."

The Hartford Civic Center, the downtown arena 45 minutes from campus where the top-ranked Connecticut Huskies play some of their games, is brimming with college ritual as the game gets under way. The band brass is swaying to and fro. Bright-faced cheerleaders practice their lifts along the baseline. During introductions, as always, the students yell "SUCKS!" at the mention of starters on the opposing team.

One of the starters, No. 22, isn't among the eight players listed on the Ballers' media sheet.

"Who's that?" someone asks one of the seated Ballers. The player shrugs, chirps down the row to his teammates. "Yo, what's 22's name?"

Playing these type of exhibitions against AAU-sponsored teams with post-college-aged players is within the NCAA rules. But that is likely going to change at the next NCAA legislative session.

The Big Ten has sponsored legislation to get rid of any exhibition that isn't against a collegiate team. Under the legislation, if passed at the January convention, NCAA Division I teams would only be allowed to play non-Division I collegiate teams, either domestic or foreign. Schools would still likely be able to play scrimmages against other Division I schools, but those games would be closed to the public.

The legislation would end not only the days of games against teams like the Ballers, but also familiar foes such as the EA Sports All-Stars, which is sponsored by Dana and David Pump of California; Athletes in Action; Nike Elite; Marathon Oil; the NBDL teams; and the Harlem Globetrotters. Games against foreign club teams touring America would also be off limits. Many of these games are now played as a payback for Division I teams that have taken a previous foreign trip.

"Our game ought to be against other collegiate institutions, period," said Big Ten commissioner Jim Delany. "The best thing for us is to play collegiate teams, so that we know who sponsors them and the eligibility of the players. Our students should play against students, not the CBA, FIBA or Goodrich AAU." 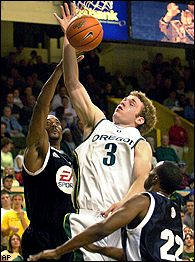 The National Association of Basketball Coaches is also endorsing this potential rule change. The NABC's current president, Oklahoma's Kelvin Sampson, has played an Oklahoma-based AAU program called Athletes First. But he is still in favor of changing the rule to avoid coaches being held hostage by any coach trying to demand a game in exchange for the recruitment of a player -- again, something that Calhoun said never occurred with UConn's recruiting of Gay.

"A lot of times, we're put in a position where there are ethical dilemmas," said Sampson, speaking for coaches who are concerned that talking about AAU programs in a negative light could spark a recruiting backlash.

"We've got to eliminate these games. Oklahoma, Tulsa, Oral Roberts and Oklahoma State have all played Athletes First, and they're a legit local team. We pay them $7,500, but we still need to change this rule. That's fine if we just play a Division II, Division III, or an NAIA (team)."

But for now, the exhibitions go on as scheduled. And the reasons behind the games are sometimes blurred.

Calhoun said he scheduled the Ballers because he wants to help poor kids in inner-city Baltimore get off the streets. Having spoken to groups in the Cecil Kirk program 15 times during his career as a college basketball coach, Calhoun has seen the good work program director Anthony Lewis, who signed the contract with UConn, has done over the years in the program's recreational program.

"The beneficiaries (of the money) are the kids," Calhoun said.

Yet Calhoun concedes that just a year ago UConn scheduled the Louisiana Futures, a program he is less familiar with, as a tool to recruit elite prospect Brandon Bass, who ultimately signed with LSU anyway. Just one month before the game was held at Gampel Pavilion, UConn, which won in a 132-74 blowout, agreed to pay the Futures $25,000.

"We said, 'Fine, we're recruiting one of their kids,' " Calhoun said. "It was a consideration, sure. But it wasn't a consideration with the Beltway Ballers."

LSU coach John Brady scoffed at Connecticut playing that game a year ago, since he knew that the Louisiana Futures weren't much of a team.

"We survived that,'' Brady said. "Brandon is still at LSU."

But Brady plays these games too, choosing to play the Southeastern All Stars, an AAU team sponsored by Wallace Prather. Prather is the Atlanta-based coach of one of the most successful AAU programs in the country -- the Atlanta Celtics. This past summer's squad features three possible first-round picks -- Dwight Howard (the likely No. 1 pick in 2004), Josh Smith (signed with Indiana) and unsigned Randolph Morris.

"We don't have any of Wallace's players, but we play him because he's a friend of ours," Brady said. "I'm not going to get a player because of one game. But they'll pass this legislation. It puts us all on the edge. But you've got to play teams that are legit, not just teams that play one game."

Bill Shults, Connecticut's associate athletic director who is in charge of the school's compliance, said his staff worked on checking out the Ballers game more than any other scheduled in the 2003-04 season. It looked at whether the club was legitimate, whether it had any recruiting prospects on the roster, and made sure there were no rules being broken in regard to Gay's recruitment. Shults said Connecticut had to do its "due diligence."

(When Connecticut, or any other Division I school, secures a contract with another school for a regular-season game, all that occurs between the two schools is a contract being drawn up, signed by the visiting school, and returned back per the conditions regarding tickets, guarantees and the like. There are no compliance issues.)

And, not every exhibition team has the pick-up quality of the Ballers, who showed up in Hartford with reversible back-and-white practice jerseys. Over the past seven years, the most successful exhibition team has been the one run by the Pump brothers. Once called the California All Stars, the Pump brothers are now sponsored by EA Sports, the same company that also sponsors the Maui Invitational.