Will Bynum says he was happy at Arizona. As happy as any guard from Chicago could be playing college basketball out in the desert.

Even as his minutes dwindled last season from 22 in the Wildcats' opener to a mere seven in his last game with Arizona, Bynum says he didn't feel the need to complain about his role with the top-ranked 'Cats. But, after 39 games and 11 starting assignments in a little over a season in Tucson, Ariz., Bynum felt as though he was missing something.

No, it wasn't minutes. Rather, it was his mother.

So, in an attempt to be closer to his ailing 54-year-old diabetic mother, Bynum decided in January after eight games of his sophomore season to transfer to Georgia Tech, the school that had recruited him three years ago out of Crane Tech Prep in Chicago, Ill.

"A lot of people really don't know what the situation was, because it really wasn't about playing time,'' said Bynum, a 6-foot, 180-pound junior combo guard. "I was getting like 18-19 minutes a game my first year and we were No. 1 in the country, so that's like getting 30 minutes or
more on another team.

"Not a lot of people understood that it was just a lot of things with my mom being sick, and she not being able to come to any of my games. Now she can come to any of them. My mom's doing good now. That was the biggest thing."

After sitting out last season, Bynum wasn't eligible to begin playing for the Yellow Jackets until the end of the 2003 fall semester. Bynum
finally got the green light to play last Saturday in Georgia Tech's 75-62 victory over Saint Louis in the Peach Bowl Classic. 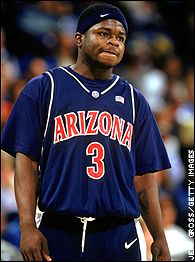 With his mother in attendance, Bynum came off the bench and helped the sixth-ranked Yellow Jackets (No. 5
Associated Press) improve to 8-0 on the season by chipping in six points, three rebounds and three assists in 18 minutes.

"That was the first time she'd seen me play in college," Bynum said.

"Really? I didn't realize that at all,'' said a surprised Georgia Tech head coach Paul Hewitt. "I know he speaks very fondly of the Arizona people and the situation there, and he still keeps in touch with some of their players. To be honest, I never really got into any specific reasons for the transfer, but it does make sense that he'd want to be closer to his mother. Will's a quiet kid, but he's usually upbeat and confident. The times that he's been down is usually when his mom isn't feeling well."

"I had a good relationship with the coaching staff and the players at Arizona," Bynum said. "I loved it there and everything was good, but it was just too far from home. I didn't get the feeling from my family being there. I just didn't get it, but I feel it now."

In only his first game with the Jackets, however, Bynum seems to have found a home in Atlanta.

"From the first day I got here, the first minute," Bynum said. "Jarrett Jack and Marvin Lewis, B.J. and Isma'il, they embraced me like I
was one of them, a part of the family. It made me feel really comfortable."

Sitting out the final three months of last season as well as Georgia Tech's first seven games has taken a toll on Bynum's game.

"He looked like a guy who's been away from the court since last December, quite frankly,'' said Hewitt of Bynum's
debut with the Jackets. "He showed flashes of the things we know he can
do. He scored pretty easily. He made some very nice passes. Defensively, he
put some pressure on the ball.

"You could just tell he was antsy the last couple of games. I think it was Nov. 13 when he came to practice I said to him, 'Hey, one more month and you're out of lockup.' And from that point on, I'd tease him every week by counting down the days. He was just anxious."

In transferring from Arizona to Georgia Tech, Bynum made something of a lateral move, although neither he nor anyone else saw it at the time. Bynum went from one of the Pac-10's best backcourts to one of
the ACC's best backcourts.

At Arizona, Bynum likely would have been counted upon to provide leadership to a young but enormously
talented backcourt that included the likes of Salim Stoudamire and Mustafa
Shakur and Hassan Adams. At Georgia Tech, however, Bynum is being counted
upon to be a role player as backup to Jack, a 6-3 sophomore point guard.

Hewitt said Bynum's presence will not only keep Jack fresher by cutting down on his minutes but also help Elder, a 6-4 junior, to focus more on
his scoring opportunities at the off-guard spot.

"I think it was good for him to see us do well because it'll allow him to feel like he doesn't have to come in and save the day," Hewitt
added. "He can just come in and contribute."

Bynum wasn't worried he'd be lost in the shuffle when he made the choice to leave Arizona for Tech, or in those days while watching the Yellow Jackets.

"It wasn't a concern," Bynum said. "I've got confidence just like any other guard here. We all bring different things to the table, so I feel
like everybody should be happy."

Hewitt, though, did have his concerns how the addition of Bynum would impact the chemistry of his backcourt. But those concerns were put to rest
when he approached Jack about Bynum's interest in transferring to Georgia Tech.

"He didn't even bat an eye," Hewitt said of Jack. "He just said, 'If you think he can help us win, you bring him in here. Don't worry, we'll
make this work.' That was good enough for me."

So can it work? "Oh, it's definitely going to work, no question about it," Hewitt said.

"People can talk can talk about chemistry all they want, but it's about talent. Guys like B.J. Elder, Isma'il Muhammad, Marvin Lewis and Jarrett Jack are talented players and you add another very talented player like Will Bynum, we'll make it work even if we have to play
smaller at times. But those guys are so good that I have to find a way to keep them on the floor for about 20-25 minutes a game."

As difficult as it might become to find minutes for Bynum and the rest of the guards, imagine how Georgia Tech's rotation would have looked this season if it had been able to keep ACC rookie of the year Chris Bosh from going to the NBA or center Ed Nelson from transferring to Connecticut. What seemed to be critical losses at the outset of the season are quickly being forgotten. And now, with the addition of Bynum, Georgia Tech is bolstering an already loaded backcourt -- the strength of the Jackets eight games into the 2003-04 season.

"One of the areas that it has helped is that its allowed us to play even more intense and harder on defense," Hewitt said. "I think the depth really lends itself to better defense more than anything else."

After his team had lost its third straight game to a top 10 opponent -- Tech's win came on the on the heels of the Billikens' 68-67 loss to then-7th-ranked Arizona -- Saint
Louis coach Brad Soderberg offered his take on Tech's backcourt.

"That's about as good a backcourt, in combination, that we are going to see all year, certainly," Soderberg said. "We just played Arizona, and they don't have
that kind of depth."

Which brings up the obvious question for Bynum: How does Tech's backcourt stack up to Arizona's?

Bynum laughed nervously when put on the spot.

"I don't know what to tell you," he said. "All I can say is that it'd be a dogfight between both schools."

A dogfight, in say March, maybe?