For the first nine weeks of the 2003-04 season, the No. 1 team seemed afraid of heights. No team -- not Connecticut, Kansas, Florida or Kentucky -- could stay atop the polls for more than two weeks. All, as it turns out, were just delaying the inevitable:

A team comfortable with No. 1 before its name. A team that annually plays its way to the top of the national rankings.

It happened this season on Jan. 19. That's when Duke was voted No. l by pollsters for the seventh straight season, a streak that ranks second only to UCLA's run of 10 straight years at No. 1.

Since returning to the top, the Blue Devils (18-1 overall, 7-0 ACC) have remained in their familiar perch, becoming the first team this season to hold No. 1 for three consecutive weeks.

All of this leads to a burning question: Should anyone be surprised by Duke's sustained success, not just this season but over the years?

"They're good. They're very, very good," said Georgia Tech coach
Paul Hewitt, whose Yellow Jackets are the latest to fall short in their bid to upset Duke, losing 82-74 to the visiting
Blue Devils on Saturday.

"We're in an age in college basketball where you certainly have to admire and respect what
they've done," Hewitt concluded.

Yes, since the 1996-97 season, Duke has experienced one of the greatest runs not only in ACC history, but also nationally. Under coach Mike Krzyzewski in the past seven-plus seasons, the Blue Devils have: 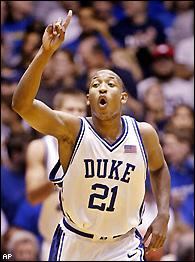