FAIRFAX, Va. -- Wichita State's 72-66 victory over George Mason last Saturday afternoon was attention-grabbing in its own right, enough to vault WSU into the AP Top 25 for the first time since 1983. It made for great story lines  the Shockers' win at the Patriot Center spoiled Mason's Final Four banner-raising ceremony and balmed the sting of the twin losses in last season's BracketBusters and "Mid-Major Super Bowl" matchup in the NCAA Tournament's Sweet 16.

But the lasting legacy of this contest has nothing to do with long-winded tales of legacies or revenge served cold. No, this game will be remembered for the emergence of a new hoops superhero, one with skyscraper hair and radioactive-yellow flying shoes.

The scorebooks claim that then-sophomore guard Sean Ogirri was physically attendant at both losses to Mason last season (31 and 35 minutes, respectively), but other data (a combined 3-for-16 from the floor) suggests otherwise. With his new hair and kicks, though, Ogirri hit five second-half 3s on his way to 19 points, including the bomb with 1:10 left that broke GMU's spirit and sent Mason Nation stumbling for the Patriot Center exits.

"Wichita State has been a little different than our other schools in that it's been star-driven through the years," said Missouri Valley Conference commissioner Doug Elgin of a program that gave the NBA Xavier McDaniel, Cliff Levingston and Dave Stallworth. "And Ogirri is definitely someone who the casual observer at home is going to remember."

But the days when the X-Man, the Big Dog and Dave the Rave wore the black and gold are distant memories now, replaced by the all-business approach of seventh-year head coach Mark Turgeon, who takes extra pride in his players when they keep their emotions in check in key situations. Last season's MVC champion Shox were a study in egalitarianism, with four players who averaged double-figure scoring and none with more than 13 points a game.

"I don't like Sean's hair, and he knows that," said Turgeon with a short sigh. "I don't like kids drawing attention to themselves, and Sean's hair has drawn a lot of attention to him nationally as well as locally. Sean is too lazy to get a haircut, that's what I tell him. You might see different hair out of him this weekend. But I don't mind the shoes."

While the fate of the best unkempt sideways Afro this side of the Crab Man of "My Name Is Earl" remains to be seen, the lightning-yellow sneaks, the ones that stood out so vividly from his teammates' black and white Nikes, are safe for now.

"My brother got these for me," said the soft-spoken Ogirri, his voice trailing off to a soft mumble. "He was wearing a pair too, so it was like a solidarity thing, you know?"

That older sibling, Miguel Rodriguez, spent Saturday's game sitting with other members of the family in the first row behind the Wichita State bench. Rodriguez, who sported an oversized Afro wig and a No. 33 Shockers jersey along with his own pair of blindingly yellow shoes, cheered loudly for every made 3-pointer.

"It's the Air Jordan Thunder and Lightning Pack," explained Rodriguez, a self-described sneaker freak. "Totally limited edition. They came in either yellow or black, and were only sold on the Jordan Web site for one day. I had to sign up on the Web site, then I had to sit in a waiting room for half an hour before I could get my hands on as many pairs as I could. Five hundred [dollars] each. After the game, Sean's shoes were smudged and dinged up a little from where someone stepped on them  man, I almost cried right there."

As for the hair, Ogirri's 'do dates back to his grammar school days  according to his brother, it's always been less about rebellion or laziness than basic on-court survival.

"He played varsity ball when he was an eighth grader  he was that good," said Rodriguez. "But because he was so skinny and light, he wasn't getting any and-one calls. I told him, 'Hey, why don't you grow out the hair?' The hair gave him a little volume, so it was okay for him to take it to the hole, he might get a call or two. That's the origin of the hair  he was always the youngest and smallest guy out on the floor.

"There was one tournament, I recall it like it happened yesterday. Sean had gone down to the Dominican Republic with my aunt to visit friends and family, and my aunt told my mom that he couldn't go down there with an Afro. So he cut it off. Then he came back and played in a tournament a week or two later, and he looked so weak out there, he was down to just skin. He got no calls, zero. I told my aunt, 'See why I had him grow his hair out?' "

Ogirri put on 25 pounds over the offseason to fill out his frame at 200, so he doesn't really need the extra hair to look imposing now. And though he's a trip to the barber away from giving a little of that weight back, his coach won't push the issue.

"With the shoes, Sean and his brother have a bond there, and that's OK," said Turgeon. "And I'm not in love with Sean's hair, but I'm not going to force him to cut it. I guess he'll cut it when he's ready to cut it. I mean, Adam Morrison has his hair and Dirk Nowitzki has his hair  as long as guys are playing well, you really don't care what their hair looks like." 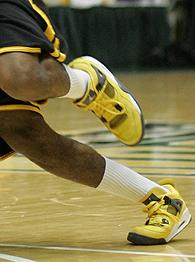 But if not for a missed opportunity in the Air Jordan waiting room, there's no telling how much more of Turgeon's leniency Ogirri would have used up this past Saturday afternoon.

"I wasn't able to get a black pair in 11½," said Rodriguez. "Let me tell you, the sneaker [message] boards I hang out on would have blown up and gone absolutely [expletive] nuts if Sean had worn one black and one yellow shoe in a nationally televised game.

"For me, it's about personal marketing. On the basketball court, there are only two real avenues for personal expression left. Everyone has tattoos now, nobody wears the T-shirt under the jersey anymore, and the headband thing is pretty much over. That leaves hair and shoes. And at this level of basketball, in the mid-majors, a little positive marketing isn't a bad thing. Definitely not a bad thing."

As for a conference attempting to sustain momentum after a league-record four NCAA bids, its commissioner doesn't mind if a budding star system helps with that positive marketing, making the MVC an easier sale to the basketball-watching public at large.

"If you like Ogirri, wait till you get a load of Jordan Eglseder at Northern Iowa," said Elgin, emitting a long, drawn-out whistle. "Seven-one freshman, and he can really play."

Sure, but what about his hair?