Craig Robinson has enough on his plate. He's trying to take advantage of the opening in the Ivy League, where, for the first time in nearly 20 years, neither Princeton nor Penn is a lock to win the league. The Brown coach is focused on getting the Bears in position to chase for the title. 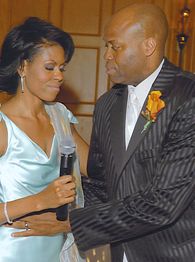 But that was hardly the only thing occupying his mind this spring and summer.

Robinson has been a surrogate campaigner for his sister and his brother-in-law, filling in for them at 10 speeches. He also is serving as the unofficial coach for his brother-in-law, ensuring that whenever the candidate is down, he is there to give him a pep talk.

And he'd love to get his hoop-loving brother-in-law back on the basketball court for a little five-on-five to keep his spirits up.

So, for all the coaches who claim they've got a full schedule in the offseason, try campaigning with Robinson's sister, Michelle, and her husband, Barack Obama  for president, no less.

"Let me start out by saying it hasn't gotten me any players yet, but I'm hoping it will help," said Robinson, an impressive figure on his own, who is considered one of the best players in Princeton history.

Robinson's role in Obama's campaign for the Democratic nomination in the 2008 presidential election isn't defined. Robinson created it. The 45-year-old fills in for his sister and brother-in-law at events, mostly talking about them as people and sharing life experiences about the couple. Robinson said he has spoken at fundraisers in New Hampshire, Massachusetts, Rhode Island and South Carolina. He will continue to do so until practice starts Oct. 12. If Brown's practice and game schedule permits, Robinson will try to squeeze in more speaking engagements when necessary.

"What I do is tell people about my first meeting with Barack," Robinson said, "and how my sister wanted me to take him to play ball, because she heard my father and I say how you can tell a lot about a personality on the court. So, when she got serious, she said, 'Take this guy and go play.' We had all met him and thought he was a good guy, and she didn't fire him like the other boyfriends. He ended up being a pretty decent guy on the court.

"He wasn't like a Division I player, but like every pickup ballplayer in the world, he could play with 80 percent of the players in the world," Robinson said. "He wasn't selfish. He was team-oriented, and the game is self-policing when you don't have refs. He wasn't like a soft guy. He was aggressive without being a jerk, and I was able to report back to my sister that this guy is first-rate."

Remember, this was Michelle's slender boyfriend, a lawyer at the time, who played hoops with an Ivy League Player of the Year and former professional basketball player.

"I respected that in Barack," said Michelle Obama, who followed Robinson to Princeton and then went to Harvard Law School. "Craig's opinion was important, and we're a sports family at heart. We grew up in gymnasiums and baseball fields, generally watching Craig play. Craig has always said you measure the character by what type of sportsman they are, and it was good to hear directly from my brother that he was solid and he was real and he was confident, confident but not arrogant, and a team player, something that you could sense on the court."

Robinson didn't play Obama one-on-one. That likely would not have been fair to Obama, and Robinson said that "wouldn't be good for the family." But what kind of player was and is the Democratic senator from Illinois?

Robinson spent his post-playing days in finance. After graduating from the University of Chicago school of business, he went on to be a vice president of Continental Bank, a vice president at Morgan Stanley Dean Witter and managing director of Loop Capital Markets, before he decided to take a flyer and be an assistant to Bill Carmody at Northwestern. 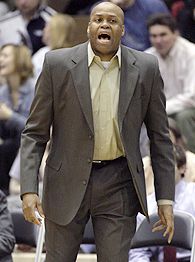 Robinson was one of the key recruiters for Carmody. To him, recruiting was like a sales pitch, and ultimately, the coach flourished at Northwestern. That set him up for a head coaching position. He got a call from the Air Force Academy after Chris Mooney went to Richmond, but he didn't get further in the process before the job went to Jeff Bzdelik. Last year, when Fran Dunphy went from Penn to Temple, and Glen Miller went from Brown to Penn, Robinson got the call to fill the vacancy at Brown.

Grabbing Robinson -- who runs a hybrid of the Princeton offense with plenty of ball movement, passing, screening and skilled big men, but with much more emphasis on freedom for the guards and getting to the rim for free throws -- was a coup for Brown.

But now, his coaching isn't limited to his players. Michelle tips him off when Obama needs to be coached, outside of politics and the grueling campaign.

Robinson might be more nervous on the campaign trail than his sister or brother-in-law. In 2004, he took a night off from recruiting for Northwestern in Orlando so he could watch Obama's speech at the Democratic National Convention from his hotel room. He said he was so nervous and was sweating so much that he had to change into workout gear to watch the speech. He said he didn't know then that Obama would run for president, but he had an idea it could be a possibility.

"Craig said to me that [Obama is] the guy with the skills, that he has to take the shot," Michelle said. "You go to the guy with the hot hand, and there's no way he could pass up this opportunity. The country is hungry for that type of leadership, and don't pass that up. Craig was able to tune into that before even I recognized that we had to do this."

When Obama is spent, Michelle puts her husband with Robinson to give him the break he needs from the campaign, even if it is for just a few hours.

"Craig understands a tough fight," Michelle said. "He understands through the work he has done in coaching and how he's built his career over the years how to follow your passion. Very few people step off a safe, conventional, lucrative path and do something a bit risky. But he did something he cared about deeply [coaching basketball]."

Robinson said he talks to his sister every other day and Obama several times a week.

"I try to talk to him when I think his battery is running down and needs a pep rally," Robinson said. "I'm trying to coach him. That's what I do. I try to keep him pumped up."

Robinson said he has flown out to meet Obama on the road when the schedule permits, just to give his brother-in-law a break for a few hours.

"He's around politics the whole time, so he needs a break," Robinson said. "It's a tremendous opportunity to be around this, this close to the process. I always thought of myself as a cynic politically. To see him attack like this, I want to help out as much as I can."

Robinson said his sister grew up as "Craig's Robinson's sister." Michelle said she still is "his little sister Miche." But today, as the campaign continues to heat up, Robinson said he is proud to now be known as "Michelle Obama's brother."

"It's that closeness that I have with Craig that gives me the confidence to do something like this," Michelle said.

Will there be any benefits for Brown? Robinson said Brown has been great about letting him campaign for Obama on his time, but frowns on his conducting any campaigning from his office, while wearing anything that says Brown or while using Brown's cell phone.

"He's like anybody else; he wouldn't be considered a booster or a rep of athletic interests," Robinson said. "If he's president, I can't send guys over to the White House to meet him and then come to Brown. But that'll be a problem I'd love to have."