It's easy to look at Clemson's 5-0 start and scoff. After all, we've seen this before, right?

Just last season, the Tigers beat Mississippi State and Old Dominion on their way to a 17-0 start, one that included wins in their first three games in ACC play. You know what happened next: Clemson dropped nine of its final 13 league games and then went out in the opening round of the conference tournament, the final piece in an almost inexplicable fade from nationally ranked to the NIT.

So why should anyone believe this season's team, which already has defeated Mississippi State and Old Dominion, will be any different?

Clemson believes there are a number of reasons history won't be repeated. After all, eight of the team's 11 losses were by five points or fewer, and a couple -- like when Virginia scored the game's final 15 points to win by one, or the clock-operator-aided loss at the buzzer at Duke -- were just bizarre. A win in any one of those could have earned them an NCAA Tournament bid. That means some perspective is in order.

"If I could wave a magic wand and take 17-0 again with a 3-0 start in the ACC, I'd take it," said Clemson coach Oliver Purnell, punctuating the pronouncement with a hearty laugh. "I don't think we were playing as well [in league play], but we were also in a tough stretch in that period of time. Of course, the problem with the ACC is that every stretch is tough."

Lost in the wave of media hysterics over the NCAA miss is the fact that Clemson righted itself in the NIT, winning three home games to get to New York and beating a good Air Force team there before falling to West Virginia in the final. Purnell thinks there has been legitimate carryover. 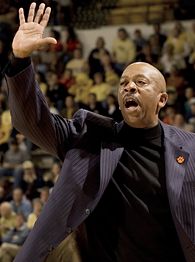 "The history of college basketball shows that any time a team has made a deep run in the NIT and has returned most or all of their players, they will be much better for that the next year," Purnell said. "I think when you return those players, that's more games, you have two, two and a half weeks more practice, you have the experience of being in a tournament setting. All those things are valuable."

This is all a short way of saying experience -- and last season's experiences -- should mean this season's Tigers should be more prepared to weather a similar kind of storm. They return four starters from last season and their top three scorers -- K.C. Rivers, James Mays and Cliff Hammonds -- are all upperclassmen. Those leaders want no part of a repeat performance, and they understand they don't have any more room for error.

"This is our last go-around, so we know it's all or nothing," said Hammonds, a senior guard who's scoring 12 points a game. "We can't say we can get the job done next year, because there is no next year. From our standpoint, we want to go out and work hard each day, bring something each day with 100 percent effort. If not, we all know what happens if we don't do that. That's what happened to us last year, and we don't want to go through that same thing."

Hammonds and Co. also have some additional help this season. Behind the Tigers' big three, the next five players in the scoring pecking order are all underclassmen. Sophomore big man Trevor Booker (8.6 points and 8.6 rebounds per game) is carrying more of the rebounding load to go with the offense he provided last season, and freshmen Demontez Stitt (starting for the departed Vernon Hamilton), Terrence Oglesby and Jerai Grant are playing a combined 50 minutes a game.

Hammonds noted that the team's Labor Day weekend trip to the Bahamas -- and the 10 days of practice that preceded it -- hinted that the newcomers would be helpful pieces to the puzzle. That belief was validated in the second game of the season at Mississippi State. Oglesby (17 points in 19 minutes off the bench) and Stitt (8-for-8 from the foul line, including six straight down the stretch) played large roles in the 84-82 win in Starkville, Miss., over a Bulldogs team thought to be a Top 25-caliber opponent. This was the type of game -- against the type of opponent -- that Clemson regularly gacked away down the stretch last season.

"When you're not playing as well, it's easy -- just through the basketball gods -- to lose a number of games in a row, particularly when they're very close," Purnell said. "The other problem we had, obviously, is that we weren't a great free-throw shooting team, and we put ourselves in position to lose some of those games by not converting early on or down the stretch."

Saying Clemson wasn't great from the foul line is like saying Savannah State wasn't great when it went 0-28 a few years back. Last season, the Tigers shot 57.8 percent from the line, the fourth-worst mark in all of Division I. In those seven losses by five points or fewer, they shot slightly worse than that (56.7 percent). And in four of those games, they shot 50 percent or worse. Rivers was the only regular to shoot better than 65 percent from the line.

This season, though, Oglesby and Stitt have combined to shoot 25-for-29 from the line, which means the Tigers now have other players aside from Rivers to handle the ball late in games.

These Tigers will get another taste of adversity Tuesday night, when they host Purdue (ESPN2, 9:30 ET) without Mays, their main man in the middle who injured his hip against Gardner-Webb on Saturday. According to Purnell, Mays could miss a couple of more games after that.

"This is not necessarily a big, huge blow for us, but it's a blow," said Rivers, a junior who is the team's leading scorer at 15 points a game. "He's the point man of our press. He's the energy guy we always have. He does so many things for us, and with that missing, we have to find someone else to cover that up."

Assuming Mays comes back healthy, though, these next few games could provide additional evidence that these Tigers can persevere. They are deeper, more experienced, better equipped for close games and, perhaps most important, more determined. Will those qualities be enough, though, to usher the squad to an NCAA Tournament bid that appeared to be its destiny for most of last season?

"We're not going to settle for being nationally ranked, 17th or something like that," Hammonds said. "We want to go out each and every night in the ACC, each and every night we step out on the floor against any team, and make a statement that this Clemson team is for real."

It may take another dozen games or more for anyone outside Clemson to truly believe that.

Andy Glockner is a regular contributor to ESPN.com's college basketball coverage and is the host of the ESPNU College Basketball Insider podcast. He can be reached at bubblewatch@gmail.com.