SOUTH BEND, Ind. -- It was a moment of foresight in a time of blinding anger, a peek at a brighter future as the lights flickered on Kyle McAlarney's career. 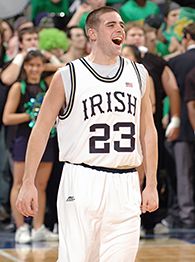 This was about an image, one McAlarney had worked his entire life to mold: team leader, workout warrior, upstanding citizen, local hero. He'd be damned if one poor choice would bring him down.

"Screw it," McAlarney concluded. "Come back and face up to it, live up to it, and see what happens. Just try to finish what you started."

The hope of a happy ending brought McAlarney back to Notre Dame. This season, it has become a reality.

After an arrest for marijuana possession prompted a suspension from school and the team, McAlarney has returned to help No. 14 Notre Dame get back to the NCAA tournament.

Despite his five-month exile and a quasi position switch to shooting guard, McAlarney has blended in seamlessly, ranking second on the team in scoring (15.0) and assists (3.6). The junior leads the Big East in 3-point shooting (45 percent) and has made 99 3s -- 13 more than any other player -- including a school-record nine against Syracuse on Feb. 24.

But McAlarney didn't come back for numbers. He came back to restore his name.

"He went back with a chip on his shoulder," said McAlarney's father, Patrick. "It's like, 'I'll show them who I am. I'm the bigger person.'"

Sagona, who coached McAlarney in AAU basketball, had traveled to Notre Dame to watch his latest prodigy face Rider on Dec. 28, 2006. McAlarney delivered for his ex-coach, scoring a career-high 21 points in a 101-51 rout.

Sagona retired to his hotel room and fell asleep, only to be awakened by a ringing telephone at 5 a.m.

"They wouldn't allow collect calls to the cell phone," he said.

"They" were the Indiana State Police, and they had arrested McAlarney after finding marijuana in his car during a 1:30 a.m. traffic stop. The 19-year-old was charged with marijuana possession and booked at St. Joseph County Jail.

That's where Sagona headed before sunrise.

"Shaken up isn't the word," Sagona said of McAlarney. "It's traumatic. Nobody thinks they're going to get caught doing anything; I don't care if you're robbing a bank or smoking a joint."

He's been a great role model, not only for athletes but other students. Our players really listen to him, believe in him, look up to him. Great story, great kid. It's neat to see it happen.

McAlarney admits he subscribed to teenage invincibility, but unlike most, he had reason to think that way.

"Clean record, everything," he said. "One detention throughout my whole high school career."

His unpolluted past mattered little after the arrest. McAlarney was suspended for Notre Dame's final nonconference game and remained sidelined as the 12-1 Irish began Big East play.

He entered a pretrial diversion program, common for first-time misdemeanor offenders, and continued to practice with the team. But his fate ultimately rested with the university's Office of Residence Life.

And Res Life was in no rush to rule.

"I had to sit on the bench, and I knew that ESPN was focusing right on me. [The caption] said, 'Marijuana suspension,'" McAlarney said. "The decision could have been made a lot earlier, just to save me that face time."

Seven games passed without an answer, as McAlarney sat on the bench in street clothes.

"You can't even describe how embarrassed he probably felt," Kurz said. "He's a great kid who would never do anything to jeopardize himself."

Both of McAlarney's parents visited him during the interval. His mom, Janice, went home to New York on Jan. 21, thinking she'd see him two days later when Notre Dame played St. John's at Madison Square Garden.

The next day, the ruling came down. McAlarney was suspended for the rest of the spring semester.

"Being kicked out of school was completely off the table," said McAlarney, who somewhat expected his basketball suspension to last the rest of the season. "With the media getting a hold of it, being on ESPN so much, and being suspended from basketball was punishment enough. But Notre Dame does things differently."

McAlarney cleaned out his room at O'Neill Hall, packed his car and left, a hasty exit made mostly out of shock but partly out of necessity.

"I had to leave campus by a certain day or I'd be arrested again, for trespassing," he explained. "I just went. I thought that was going to be the last time I saw this campus."

U.S. Route 31, which connects South Bend to Indianapolis, slices through farmland and towns like Mexico, Kokomo and Peru. It's anything but scenic during daylight hours, dark and desolate after sundown.

"There's a part of 31 that's just nothing," said McAlarney, who drove the road toward his uncle's house in Cincinnati after leaving Notre Dame. "There's not even lights. It was kind of the perfect drive for what I wanted to do."

I'd be lying if there weren't certain times I think back and say, 'Who could we have been in the NCAA tournament with him?'

As he contemplated his future, McAlarney felt shock but also excitement. Schools soon would be calling -- Sagona fielded 30 to 40 calls from teams, and Patrick McAlarney said 10 to 12 schools offered scholarships -- and the prospect of a fresh start sounded good.

But the delay in McAlarney's disciplinary decision made transferring tricky. He would need to enroll almost immediately to meet NCAA rules and remain eligible for the following season. If he took his time, he wouldn't play for a year and a half.

There was a third option, which Brey presented when he visited McAlarney's home two days after the suspension came down: Return to Notre Dame.

Brey knew it'd be a tough sell. Notre Dame was way behind in the game to regain McAlarney's trust.

"We were down 30 points when I left [for Staten Island]," he said. "I told Kyle, 'You may not forgive Notre Dame right away. Come on back and get involved with our basketball program. In time you'll say I'm proud I'm a Notre Dame grad. You'll come back to reunions, and we'll tease the hell out of you when we're drinking.'"

McAlarney warmed to the possibility of returning during Brey's two-hour visit, but he wasn't sold. Other schools beckoned -- a flight already had been booked to visit Xavier on Jan. 27 -- and McAlarney and his parents felt "betrayed" by Notre Dame.

"I still have bitterness," Patrick McAlarney said. "Character had nothing to do with the judgment. How long it took them and when they did it was just a horrible way of doing things."

But as Kyle McAlarney deliberated, one message stuck: Finish what you started.

He called Brey the next morning.

"Coach, I'm coming back," Brey said McAlarney told him. "I said, 'Kyle, you don't understand how great a story this is going to be.'"

But the happy ending still seemed far away.

Left off city maps and neglected by city government, Staten Island long has been called the forgotten borough. The term also applies to its basketball talent.

While Brooklyn and Queens mass-produce Division I players, Staten Island isn't known as a hoops hotbed.

"I'm not trying to boost my ego or anything," McAlarney said, "but in Staten Island, as far as basketball goes, I'm one of the biggest deals." 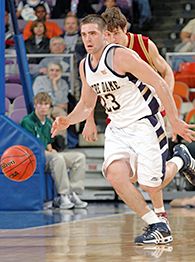 That's what made it hard to go back there.

"He's the favorite son of Staten Island," Brey said. "Sending him home with his tail between his legs, I was worried about him psychologically."

But McAlarney didn't go into hiding.

He took two classes at the College of Staten Island. He worked out constantly. He hung out with one of his best friends, Antonio Betulia, who had been kicked out of St. John Fisher College two weeks after McAlarney was kicked out of Notre Dame.

"[Betulia] would joke to me about the whole situation," McAlarney said. "When you can really laugh about it, that's when you know you're over it."

Moore Catholic High School became McAlarney's 24-hour fitness center. He'd been given the key to the gym as a high school junior and was on a first-name basis with the janitors.

"His peace was working out," Moore Catholic coach Rich Postiglione said. "He's always been that way. He has the ability, more than any other player I've ever seen, to push himself extremely hard, shirt-dripping-sweat hard, by himself, during a workout."

Tony Rolinski, Notre Dame's strength and conditioning coach, stayed in regular contact with McAlarney. The guard needed no prodding to stay in shape.

"I liken Kyle to a Navy SEAL," Rolinski said. "He was working himself out four hours a day."

McAlarney spent afternoons at Shoot For Success, a basketball program for Staten Island youth. Gerry Mosley, the program's founder, paid McAlarney to help out, but the experience proved priceless.

"It really humbles you," McAlarney said. "These little kids, they have my jersey on and they're so excited for me to just be there. It really gave me an opportunity to enjoy basketball, teach them something, almost clean my image up."

As Notre Dame made its surprising run to the 2007 NCAA Tournament, Brey tried to keep McAlarney involved. He checked in often, leaving messages: Wish I had ya. Man, if you were in there tonight.

"I'd be lying if there weren't certain times I think back and say, 'Who could we have been in the NCAA tournament with him?'" Brey said.

This season, he no longer has to wonder.

McAlarney returned to campus in May and began to reintegrate with the team. The biggest challenge appeared to be playing alongside Tory Jackson, who had claimed the starting point guard spot after a strong freshman season.

Brey, who has coached several successful guard combinations, soon called Jackson and McAlarney into his office.

"Because we've got a football program, everybody likes to have quarterback controversies, and they spill into basketball," Brey told them. "We do understand that this is going to work. There will be no problems. I don't have a point guard, I don't have a 2 guard. I have two really good guards. Are we clear?"

Jackson and McAlarney laughed, told their coach not to worry and ran out. They haven't stopped smiling.

As Jackson continues his evolution as a court leader, McAlarney, a 44.3 percent 3-point shooter before the season, has cashed in on increased scoring opportunities. He admits point guard still feels like his natural position, but he looks at ease launching 3-pointers from far behind the arc.

"I really love the role that I'm playing," he said.

McAlarney's zigzagging journey came full circle Dec. 4, when he returned to Madison Square Garden and scored Notre Dame's final nine points in a 68-59 win over Kansas State. The Big East tournament, beginning Wednesday at the Garden, will serve as another homecoming for McAlarney, a proud New Yorker who refused to put Indiana plates on his car when he left for Notre Dame.

The suspension saga still follows McAlarney and undoubtedly will be rehashed during the NCAA tournament. But the Notre Dame guard has earned the right to be cast in a new light.

"He's been a great role model, not only for athletes but other students," Brey said. "Our players really listen to him, believe in him, look up to him. Great story, great kid. It's neat to see it happen."

Adam Rittenberg covers college football and college basketball for ESPN.com. He can be reached at espnritt@gmail.com.