Team to watch
No. 8 UCLA: The Bruins are better than a No. 8 seed, at least talent-wise. They played themselves into this position with their poor play down the stretch. But the Bruins beat a No. 1 seed (Kansas), a No. 2 (Alabama) and a No. 3 (Arizona). If this team gets its act together, it could be one of the rare 8-9 winners to give a No. 1 fits and actually win in round two. 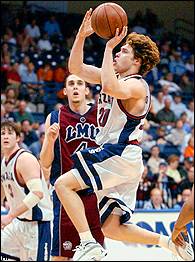 Dan Dickau, Gonzaga: Dickau was unbelievable last Monday night, scoring 19 points in six minutes to take the Bulldogs from down seven to up 11 in the second half against Pepperdine. He has the ability to take over games and could carry the Bulldogs through this bracket, albeit the toughest in the field.

Top five
Steve Logan, Cincinnati: He's the most dominant player in the bracket and that's from the guard position. He's just as much of a leader as Dickau and can score like him. His defense is better and he's tougher.

Josh Davis, Wyoming: The Cowboys' Davis has been a mystery this season. The team has leaned more on Marcus Bailey than on Davis. He needs to be more of a factor for the Cowboys to make a run in this field, let alone get out of the first round.

David West, Xavier: The best big man in the bracket, the entire bracket, is in the West. He's not a true center, but he can own the paint. West could put up 30 and 15 in this field and Hawaii needs to find him early and often to ensure he doesn't go off on the Rainbow Warriors.

Luke Walton, Arizona: Jason Gardner hits the big shots but Walton does all the little things inside and out to ensure the Wildcats win big games. Walton has been one of the most improved players in the country and his experience has carried this team. He's a rock and will be looked at to lead this team to the Final Four.

Hollis Price, Oklahoma: Price is up there with Logan and Dickau as top leader in the West. Price makes big shots and doesn't get discouraged if the 3s aren't falling. He just changes his game and takes the ball inside. He gets everyone involved and ensures the Sooners play tough every possession.

Best first-round matchup
No. 5 Miami vs. No. 12 Missouri, Albuquerque, N.M., Thursday: This could have been an Elite Eight matchup at one point this season. Missouri's slip meant that it happened in the first round. The 'Canes have the athletes to compete with the Tigers and there could be plenty of 3s reigning in this game with Darius Rice and Kareem Rush launching them at the Pit.

Worst first-round matchup
No. 1 Cincinnati vs. No. 16 Boston University, Pittsburgh, Pa., Friday: It had to happen in a few regions but the Terriers are grossly overmatched here. They won the America East on a prayer shot in the semifinals and then crushed a team that had no business in the final in Maine. Boston University probably can check on flights home from Pittsburgh at halftime.

Best chance for a first-round upset
No. 10 Hawaii vs. No. 7 Xavier, Dallas, Friday: Hawaii has been on the road for weeks and isn't traveling from Honolulu. The Rainbow Warriors need only jaunt down from Tulsa to make the game. Hawaii is tougher with an international flavor and they have the shooters and the ballhandlers, especially Carl English, to beat the only rep from the A-10.

Toughest game for a lower seed
No. 6 Gonzaga: The Bulldogs have to play No. 11 Wyoming, a team that won the Mountain West regular season, swept Utah and is as athletic as any team in the West. The Cowboys have the talent to be higher in the bracket but didn't win enough non-conference games to get a better draw.

Worst seed given to a team that could be trouble
No. 12 Missouri: The Tigers are in the best matchup in the West and they're also a Final Four preseason favorite as a 12 seed. Ouch! The Tigers have the talent to get to Atlanta if they can shoot straight and dominant post play out of Arthur Johnson. Missouri earned a 12 seed with its play down the stretch but the Tigers could be like Gonzaga's 12 last season.

Biggest homecourt advantage
Oklahoma in Dallas: Edges out Arizona in Albuquerque. The Sooners play a football game against Texas in the Cotton Bowl and usually get good support. The same will likely be true for the second seeded Sooners in the first and likely second round.