It has been called the greatest 44 seconds in NCAA Tournament history. Even 20 years later, it's a seamless sequence of twists and turns, breaks and bends that culminated in a jaw-dropping result.

On one end, the University of Houston, the top-ranked team in the country, riding a 26-game winning streak and an impenetrable air of invincibility. On the other end, North Carolina State, a team few thought belonged on the same floor as Houston and even fewer thought could actually win.

Yet that's just what the Cardiac Pack did, in the most unorthodox of manners. These are the words of those that were there -- Dereck Whittenburg, Lorenzo Charles, Clyde Drexler and others. Man for man, they each say that even now, the memories are as vivid as if it were yesterday.

Thurl Bailey, N.C. State senior forward: "To this day, people point out that 44 was David Thompson's number when N.C. State won the championship in 1974. They say they sensed that something magical was about to happen."

Mike Warren, N.C. State sophomore forward: "Coach drew up the five play -- the same play we had run every other last-shot situation that I was involved in at State. As genius as coach Valvano was in terms of basketball, his genius was his simplicity. And this was as simple as it got."

Lorenzo Charles, N.C. State junior forward: "He wanted me and Thurl to camp out low. He told the perimeter guys, Dereck, Terry (Gannon) and Sidney (Lowe), to work time off the clock and with eight or nine seconds left, whoever was in the middle of the floor, make a move to the basket. If he had a lane, take it. If not, draw the defense and dish."

Terry Gannon, N.C. State sophomore guard: "Houston had played man-to-man all night long and we expected that again here. But give (Houston head coach) Guy Lewis credit -- they were in a 1-3-1 trap. It completely threw us off. We're all spread out, completely out of sync, and they keep getting closer and closer to stealing it."

Clyde Drexler, Houston senior guard: "We played great defense. Everything we wanted to do, we did. With about 10 seconds left, I almost intercepted a pass, but it was just out of reach."

Bailey: "Eventually, Sidney got started. He drove toward the basket and passed me the ball in the corner. He wanted me to shoot it."

Sidney Lowe, N.C. State senior guard: "That was his shot. And I felt we had to take our chance. But he didn't shoot. That really screwed me up."

Bailey: "I wasn't dumb. I knew I hadn't made a shot in the entire second half so there was no way I was going to shoot that. I didn't even look at the basket. I kicked it out, past Sidney, over the top of the defense, to Dereck. Next thing I know, Benny Anders comes from behind Dereck and pokes the ball away. I was thinking, 'Oh my goodness. He's going to steal the ball. We're going to lose. And it's going to be my fault.' "

Whittenburg: "The ball got knocked away, but I reached out and grab it."

Gannon: "I was wide open. I'm still wide open, by the way. In fact, I'd have a better voice if he would have passed to me. I was screaming so loudly for the ball I ruined my voice." 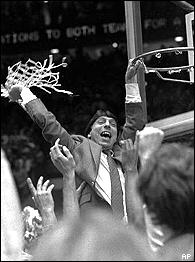 Gannon: "When Dereck shoots, I look under the basket and for some reason, (Houston center Akeem) Olajuwon has drifted away from the basket."

Guy Lewis, Houston head coach: "When Benny almost stole the ball, Akeem thought he was getting it and he broke for the other end of the floor. He didn't go very far, but his momentum carried him that way. It was one of those things."

Drexler: "I'm waving my hand, reminding Akeem to get back under there. He was the kind of defensive player who could cover the entire floor. He was phenomenal. But I'm telling him, 'Get back under the basket.' "

Bailey: "I was on the opposite side as Lorenzo and everything seemed like slow motion. All I could see was it was going to be short. I was frozen. My feet were nailed to the floor. And I was praying that the ball didn't come to my side. I could barely move."

Warren: "From the bench, I could tell it was short. Definitely short. But under the basket, it was almost like the seas were parting."

Drexler: "You think it's an airball. You think perfect, the game is going into overtime. But low and behold, there's Lorenzo Charles."

Charles: "Of all the players camped out in the paint, I was the only one that reacted. Olajuwon was out of position and didn't have a clear view of where the ball was. Thurl didn't want offensive goaltending. I just reacted. I really wasn't sure if I was close enough to the rim to catch the ball and in one motion, put it in. But I just jumped anyway. I got it. And when I turned my body, I saw I was close to the rim. The surprising thing was that I was up there and nobody was up there with me."