Editor's Note: Throughout the 2002-03 season, ESPN's Fran Fraschilla took us inside the Xs and Os of college basketball. Here is his look at the 2-3 zone used by Jim Boeheim at Syracuse.

The zone defense has been around since shortly after Dr. James Naismith nailed the peach basket to the balcony in the gymnasium at the Springfield YMCA. 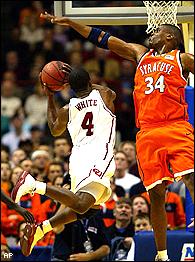 In today's college basketball game, most coaches will use the zone as a "change up" to their man-to-man defense. But under the direction of Jim Boeheim, Syracuse use zone as its primary defense. The Orange have played it as well as anyone in the country over the past two decades.

But last Sunday, Syracuse's zone was at its best against Oklahoma in the East Region final. And as someone who's coached against Boeheim and tried to solve his 2-3 zone, seeing the Sooners struggle wasn't a total surprise.

The 2-3 zone isn't a defense a team can figure out in 48 hours. That's why it's such a good weapon in the NCAA Tournament. While Texas will have a week to prepare, and will have its zone offense ready, the Syracuse zone is special.

This year's group of Orangemen make the 2-3 even tougher because of the big, rangy guards and quick active wing players who have had the ability to cover a lot of ground in the defense. Heading into Saturday's semifinals, let's examine why Syracuse's 2-3 zone has been so effective, and specifically which players will be responsible for the coverages, and where the Orange will try to trap the Longhorns in the Superdome.

Something to consider: Michigan State won the 1979 national championship playing, almost exclusively, the 2-3 zone. Having Magic Johnson on the back line didn't hurt, either, but just because Boeheim hasn't won it all, his zone can bring home a title to Syracuse.

Here here are some reasons any zone defense can be effective:
1. The size and quickness of the players can effectively take away the open 3-point shot.(See: Oklahoma's 5-for-28 on 3-pointers.)
2. Teams spend most of the season working on their man-to-man offense.

3. It is easy for a team that plays zone to know what its opponent will do against them. There are far more man-to-man offenses to prepare for than zone offenses.
4. Playing zone keeps good players out of foul trouble. (Carmelo Anthony did not foul out of a game this season.)
5. Playing zone hides a bad defender, although Syracuse doesn't have a weak link in its 2-3 zone.
6. The zone can be an effective defense to rebound and fast break out of because of where players are positioned within the zone.
7. The zone can change the tempo, not to mention momentum, of the game.

So, with all this in mind, here is the basic alignment of the Syracuse 2-3 zone.

This year, the point (1) has been handled by a pair of freshmen, 6-foot-2 Gerry McNamara and 6-4 Billy Edelin; 6-6 Kueth Duany plays the off guard (2) when McNamara or Edelin aren't on the court together; the 6-8 phenom Carmelo Anthony is on the wing (3); another 6-8 forward, Hakim Warrick, plays power forward (4), while 7-footer Craig Forth starts at center (5) and is releived by Jeremy McNeil when the Orange goes "small".

Out on top of the zone, McNamara and Duany are positioned together in a way that they could touch hands, in an effort to keep the ball out of the high post. Anthony and Warrick, meanwhile, are positioned about two feet outside of the lane just off the first marker, while Forth and/or McNeil plays the middle of the lane.

(It's interesting to note that in the East Region semifinal, Auburn was able to attack the Syracuse zone effectively by having Marquis Daniels receive the ball at the free-throw line and either turn and shoot a mid-range jumper, or find an open Tiger when Syracuse collapsed on him. Oklahoma, however, never found a consistent avenue to that area in the East final.)

Now watch how the Syracuse 2-3 zone moves as the offense moves the ball. We'll use Syracuse starting five as an example, but remember, Edelin will play the point (X1) and McNeil sees plenty of time in the center or post position (X5)

On the initial pass from top to the wing: