ATLANTA -- The returning Duke players didn't hesitate in November to say freshman forward Luol Deng was their most talented player.

He is now considered the most valuable.

Deng is also the reason the Blue Devils are in a 14th Final Four, but first since 2001, the last time Duke won the national title.

Deng changed the outcome of this Elite Eight game against Xavier over the final five minutes. First, with his 3-pointer to bring Duke even; then by setting up J.J. Redick's go-ahead trey with an acrobatic offensive-rebound-turned-assist; and finally, via his full-extention tip-in. And Deng did two of the three with four fouls, remaining aggressive but in control while going to the basket. 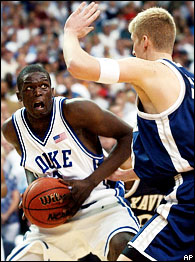 Then again, Deng's importance to the Blue Devils shouldn't come as a shock. He was one of the most highly-touted freshmen to ever enter the hallowed Durham halls. He was a likely NBA lottery pick before he arrived on campus, and now is a lock for the lottery -- whether it's this or any other other spring he decides to leave campus.

Billed as a scorer, during Duke's 66-63 victory over Xavier in the Georgia Dome on Sunday he was much more.

"If we don't have Luol, it would be tough for us to win," Duke senior point guard Chris Duhon said. "He does so many things for us on the court. He knocks down shots. He gets rebounds. We just told him to be aggressive out there and not commit silly fouls."

Deng scored a team-high 19 against the Musketeers. He had 18 against Illinois in the Sweet 16. But while he would earn regional MOP honors, Deng seemed to play scared in the first half, scoring only four points, committing two fouls, making just 1 of 6 shots and missing both of his 3-point attempts.

Deng, however, wasn't alone in his struggles. Duke trailed 30-28 at halftime and shot just 39 percent for the game. But Deng did what apparently most great Duke players do in a time of personal crisis. He spoke out at halftime. Apparently, he even cried.

"He got very emotional," Duke coach Mike Krzyzewski said. "He was crying and just stood up and expressed his feelings to the team. He said the team needed to play outside of ourselves."

The message Deng conveyed to his teammates wasn't unique. Krzyzewski has been in the Duke locker room when players like Johnny Dawkins, Grant Hill, Bobby Hurley, Christian Laettner, Trajan Langdon and Shane Battier provided similar scenes in so many NCAA Tournament games. But to hear a freshman speak up with the Final Four on the line was new.

And, like the words of past Duke players, Deng's would produce a familiar result.

"For a freshman to do that, for any kid to do that, it made an impact," Krzyzewski said. "(Then) his leadership skills came out as a result of those plays. We needed something extraordinary from our guys, and Luol gave us that."

Deng's 3-pointer with 5:11 to play tied the game, 56-56. Just as crucial was his ability to grab an offensive rebound off a Duhon miss that was heading out of bounds, and in the same motion, throw a pass back out to an open J.J. Redick at the top of the key for a 3-pointer. Redick's shot gave Duke the lead for good, 59-56, with 2:56 left.

"He's so unique because he's so quick," Xavier assistant coach Sean Miller said. "He's so long, too, and he appears on the scene so fast."

No more evident were those traits than when Deng somehow got his right finger tips on the drifting rebound and tapped it back up and through the basket as he was falling. The bucket gave Duke its largest lead of the game, 61-56, with 1:52 remaining.

"I just touched it, and when I touched it I thought it was going to hit the front of the rim," Deng said.

"I thought (that sequence) knocked them back a bit," Krzyzewski said. "(Xavier) never quit, but that gave us a cushion that we were able to handle."

Again, Deng's last two offensive rebounds came after picking up his fourth foul. But, while some freshmen might have been tentative to go after offensive boards, Deng said he just had to play smart, but remain aggressive. Since no one on Xavier put a body on him, he seized the opportunity to get the loose rebounds. Deng finished with seven boards.

Duhon said he told Deng to relax at halftime and be the player that he was for the Blue Devils all season, the one that averaged 14.9 points a game. Duhon even made sure he mentioned how he handled his Elite Eight experience as a freshman in 2001 against USC.

"That's when I hit some big-time shots down the stretch," Duhon said. "I told him that he's way better than me so continue to do be our guy. I told him to treat this like a regular game and go out and have fun."

Now Deng and his teammates will have fun in San Antonio. Duke is matched up with Connecticut in one national semifinal Saturday. Ironically, the first college basketball game Deng watched was the 1999 national title game between the Huskies and Blue Devils when his brother Ajou was a redshirt freshman on UConn.

"I wore a UConn jersey that night and stayed up celebrating (after the Huskies won the title)," Deng said. "This time, he'll have a Duke jersey on since I did it for him."

Yes, Deng was expected to be the difference this season. Sunday, he was the reason Duke is back in the Final Four. Anointed the next great player to lead Duke to a national title, he's the reason the Blue Devils still have a chance.