ST. LOUIS -- It happened every single day this summer. Georgia Tech point guard Jarrett Jack would head to the basketball building, pop his head in assistant coach Cliff Warren's office and undergo the most intensive mental rehabilitation any basketball player could imagine.

Everything down to why Jack's shirt wasn't tucked in properly was broken down, analyzed and argued over. At Jack's request.

"We'd close the door, man to man, and have it out," Warren said. "I wasn't his coach on those days. I was just a friend. We'd talk. We'd argue. We'd disagree. It had to be painful at times. But he was that committed to getting better.

"That's his favorite quote -- 'Coach, help me get better.' He wants to be one of the best."

Yet somehow, Jack, a sophomore, lived up to those names of the past Sunday afternoon, single-handedly carrying the Yellow Jackets to a 79-71 win over Kansas and to their first Final Four since 1990. The point guard that year? Kenny Anderson. 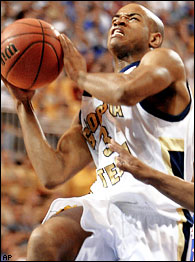 "I'm not sure where to put him among those guys," head coach Paul Hewitt said. "But he should have no shame standing right there alongside any of them. I always said we couldn't compare them until he takes a team to the Final Four. Now we can do that."

On a night in which Tech's leading scorer, B.J. Elder, and Friday's hero, Marvin Lewis, combined to score just one point, Jack scored a career-high 29 points to go along with nine rebounds, six assists and four steals. But more importantly, he was there when his team needed him most, scoring 14 of the Yellow Jackets' last 22 points and grabbing three of their last four rebounds. But perhaps his biggest play of the game came with 1:53 left to play, when he drove to the basket, drew the defense and kicked it to the top of the key where Will Bynum drilled a 3-pointer, breaking a 71-71 overtime tie.

"With B.J. out, I knew somebody had to step up," Jack said. "And I took it upon myself to get to the basket and create some opportunities for me and my teammates. I just told myself, 'Keep attacking until the game is over.' "

And that's just what he did, relentlessly. Each of his seven field goals came from inside the lane. His aggressiveness also sent him to the free throw line, where he made 13 of 14 attempts.

Even when things went wrong, he used his tenacity to make them right. With Georgia Tech up by two with a minute remaining in regulation, Kansas' Aaron Miles stole one of Jack's entry passes to the post. But no sooner was the ball headed the other way and Jack stepped in front of Miles' pass to teammate Keith Langford.

"I was trying to get it in the post and that ball came off my hands a little, well, terrible," Jack said. "Then as soon as Miles put it out there, I made a play on it."

The measure of a true point guard, especially in the tournament, is poise. Control. The ability to break down a defense and get teammates involved. The ability to score, but only when the option is open.

How effective was Jack on Sunday? His teammates barely noticed his 29 points.

Warren would prepare a tip sheet for Jack, noting various things he should pay attention to. And when he didn't?

Said Jack: "Some of it was painful. But we'd rewind every play three or four times. We'd note the time, the score, and the situation. Inevitably I'd end up kicking myself for the mistakes I was making. But I learned."

So midway through the first half, when Kansas cut Georgia Tech's 11-point lead to two, he didn't flinch. Late in the second half, when a seven-point lead disappeared and the game headed to overtime, he didn't sulk. In fact, it was Jack who got in his teammates faces and screamed in the huddle that the game wasn't over.

Yet, he took the most pride in controlling the tempo. When the Yellow Jackets needed to run, he ran. When they need the pace to slow down a bit, he backed it down and ran the halfcourt sets.

"That's my job," Jack said. "More than anything else, that's what I'm supposed to do."

And because of this, Jack understands his place in history just as clearly. In fact, shortly after signing with Georgia Tech, the basketball junkie researched all the way back to 1961, where he discovered Roger Kaiser as the school's first All-American.

"I wanted to see who the first guy was who started this whole thing here," Jack said. "Mark Price had to look up to somebody."

You can almost see the Final Four highlight clip already. There's Price, Anderson, Marbury, Best and inevitably a shot of Jack, breaking down the Kansas defense and taking his team to the Final Four.

Is he worthy of such comparisons?

"To put me up there with those guys, that's tough to swallow," Jack said. "I'm just a humble guy. When they told me I was third-team all-conference, I was like, 'Really? Why me? You're not going to hear me worry about that stuff. I just want to win."

When the final buzzer sounded Sunday, Jack raced to midcourt and heaved the ball into the Georgia Tech section. "I didn't care where it landed, but you better believe I knew what I was doing."

The ball eventually ended up in the hands of Hewitt's wife, Dawnette. Yet an hour or so after the game ended, while watching the CBS highlight show in the Georgia Tech locker room, Warren decided he and Jack will need another film session between now and San Antonio. Not because of something Jack did during the game, but because of what he did after.

"Man, that celebration was terrible," Warren said. "I'm going to have to bring him in so we can work on that."