One day after winning the Pac-10 tournament for the first time,
the Huskies were awarded a surprising No. 1 seed in the 65-team
NCAA Tournament.

"If you ask me, 'Do we deserve it?' My answer is 'Yes,' " coach
Lorenzo Romar said Sunday. "Are we surprised? I guess the
surprising part is that we weren't sure whether someone else, other
than us, would think we deserved it." 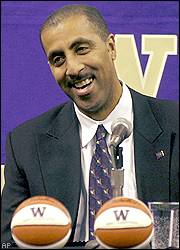 Washington (27-5) is the top team in the Albuquerque Regional,
which keeps the Huskies in the West, potentially, through four
rounds. They open NCAA play Thursday against 16th-seeded Montana
(18-12) at Boise, Idaho.

Unlike last year's trek to Columbus, Ohio, where Washington lost
102-100 to Alabama-Birmingham in the first round of the NCAA
Tournament, it's a 6-hour drive from Seattle to Boise, and the
Huskies' noisy students are sure to be there.

"I'm really hyped about that," point guard Will Conroy said.
"It means the Dawg Pack can go."

Washington made a strong case for a No. 1 seed by beating
Arizona 81-72 in the Pac-10 tournament final Saturday night, the
first league title of any kind for the Huskies since 1985.
Washington outscored the Wildcats 17-2 over the last 5 minutes.

"We've definitely got a banner to put up in the gym next
year," forward Bobby Jones said. "We'd love to have another one
that says, 'National Champions,' too."

Fans and Washington players gathered Sunday at the team's
on-campus arena, and cheers went up when the television broadcast
revealed the Huskies as one of four No. 1 seeds in the field.

Previously, Washington's highest NCAA Tournament seeding was a
No. 5 in 1985 -- the final season under venerable coach Marv
Harshman.

"I'm not going to lie and say I thought we were going to get a
No. 1 seed," Jones said. "But then I woke up today, and I started
watching the shows. People were saying we could get it. I started
believing them."

Clearly, the Huskies benefited from Wake Forest's loss in the
Atlantic Coast Conference tournament quarterfinals. Wake Forest,
ranked in the Top 5 most of the season, was assigned a No. 2 NCAA
seeding.

It was tough to ignore that Washington went 14-4 in one of the
nation's top conferences. Romar said it's his understanding the
Huskies finished No. 3 in the official Ratings Percentage Index
that was used to select and seed teams.

"Washington has had a tremendous year," said Bob Bowlsby,
chairman of the NCAA selection committee. "They've had a lot of
good wins. They are a postseason-tournament winning team. We just
felt they deserved to be on Line 1."

The Huskies started strong, beating Utah, Oklahoma and Alabama
to win the Great Alaska Shootout in November. They beat visiting
North Carolina State in December and continued to roll when
conference play began.

"You look at their body of work and they've done a good job,"
said Stanford coach Trent Johnson, who said he didn't expect
Washington to receive a No. 1 seed. "It speaks volumes to the
selection committee. They were able to give a No. 1 seed to the
Pac-10 in the West."

Most importantly, the Huskies closed strong -- going 11-2 down
the stretch. The basketball program has improved during a downturn
for the once proud football program, which was a school-worst 1-10
last fall.

"Regardless of what else is going on, what we've been able to
do in itself has gotten people excited," Romar said. "We're
excited to be in a position to be carry a torch."

Basketball has become a hot ticket in Seattle since Romar -- a
top assistant under Jim Harrick when UCLA won the 1995 NCAA title --
took over at his alma mater before the 2002-03 season.

In three years, the Huskies have gone from Pac-10 also-rans to
one of the top four teams in the nation -- at least according to the
selection committee. Negotiations have begun on a contract
extension for Romar, though nothing is official yet.

"I never thought this would happen this quick," Jones said.
"It shows how talented we are, and it says a lot about Coach
Romar. Guys like to play for him because of the attitude he brings.
There's no favoritism. You've got to respect that."