He was the ACC player of the year last season. You might remember that. Or maybe you don't. It was hard to keep that title next to him while all of this year's attention filtered down Tobacco Road to North Carolina and Duke or out to Winston-Salem.

But Hodge is still here, still playing in the NCAA Tournament, still putting up major numbers and looking every bit one of the top players in the ACC and in the country.

Hodge played 40 minutes, scoring 19 points, dishing out nine assists, with seven boards and three steals (with only two turnovers) in No. 10 NC State's 75-63 comeback win over No. 7 Charlotte in the first round of the Syracuse Regional at the DCU Center.

He also surpassed the 2,000-point plateau for his career, joining former Wolfpack greats Rodney Monroe (2,551 points) and David Thompson (2,309) in the exclusive club at NC State.

"He's comparable to any of those guys at Duke, Carolina in terms of ability and leadership," Charlotte coach Bobby Lutz said.

Still, Hodge was only second-team all-ACC this season. That's right -- he couldn't crack the first team with Duke's J.J. Redick and Wake Forest's Chris Paul taking the two guard spots. But Hodge did still score 17 points a game (down just one point from a year ago), dished out 142 assists (up from 112 a year ago) and had just as many rebounds (6.8) and steals (42 to 43 a year ago).

"He has had a great year and if you look at his numbers, they're as good as anybody else in college basketball," NC State coach Herb Sendek said. "Think about the courage it took, since he was ACC player of the year, to come back. Unless he's the ACC player of the year again, [his stock] goes down. What are you going to do? It's not fair but there are a lot of great players in this league."

Hodge had to take on even more responsibility this season, notably playing some point and/or handling the ball more often with Tony Bethel dealing with illnesses (intestinal) and injuries (groin). Bethel missed five games in the middle of the season and then two of the three ACC tournament games.

A lingering groin injury forced Bethel out of the Charlotte game and will keep him out of Sunday's second-round game against Connecticut as well. 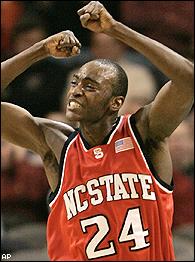 "Julius has taken on a lot for this team because we haven't been the same team from the beginning to the end," said Sendek, who beat Charlotte without a second starter, Jordan Collins (shoulder injury).

"We've been decimated this year and we've put a lot on his back and he's responded greatly," Sendek said. "He came back when a lot of players would have gone."

He's right. Being the ACC player of the year usually means a player will bolt after his junior season. But Hodge is a competitor who wanted to return to get his degree and bring NC State back to the Dance.

He said he never thought the Wolfpack would miss the NCAAs, not even when they were muddling along in the middle of the pack. A two-point win at Georgia Tech (Feb. 13) turned the season around and made him think this team could make a run to the tournament.

NC State went on to win four of its last six regular-season games and two in the ACC tournament, including a win over Wake Forest minus Paul, who sat for his punch to Hodge's groin in the season finale -- a game Paul won on a last-second shot.

"This has been a tough year because of all the injuries we've had," Hodge said. "This feels great to get this win against a good Charlotte team. After we got that Georgia Tech win, no one cared who was scoring the points. We played as a unit."

The Wolfpack made its fourth straight NCAA Tournament appearance under Sendek, something that should finally silence most of the fans who love to constantly criticize him. He has now been in the postseason in eight of nine seasons.

The Wolfpack have a 13-9 record in the ACC tournament under Sendek, too. More impressively, the Wolfpack are into the second round of the NCAAs for the third time in four years.

"It's crazy," Hodge said. "He's not only a great coach but a great person and we take on his identity throughout the postseason. We're hardnosed because of him. We really love coach Sendek and he gets it done during the season and in the postseason."

Recently, a lot of that has to do with Hodge who, by the way, is still playing and still putting up big numbers -- in case you haven't noticed.