WORCESTER, Mass. -- An hour before tipoff, in what could have been the final game of Tom Brennan's coaching career, the most famous man in Vermont was in the media room chomping on a pre-game sandwich.

"Do you think [Syracuse coach] Jim Boeheim is coming in here?" the retiring Brennan quipped with his typical wit.

Brennan wouldn't have it any other way but to work a room an hour before he's on stage. It didn't seem he was ready to leave.

Now he won't have to just yet.

Vermont's stunning 60-57 overtime win over No. 4 seed Syracuse on Friday night at the DCU Center gave this rather staid tournament its first Cinderella. (They were joined by 14th-seeded Bucknell later in the night)

So what did Brennan say after the game, by far the biggest win in Vermont history?

"It's not like we're winning five more and meeting the president," he remarked in the postgame locker room frenzy.

Just when did Brennan think this magical season would end?

"I thought it would end today, to be honest with you, and then when it went to overtime, I was sure it would end today," he said. "I just wish we were playing next Friday instead of Sunday so we could stretch it out a bit. I'm the first to admit that I'd kill for a split (this weekend) but now that's not enough."

Self-deprecation aside, the Catamounts' story could go down as one of the greatest tales told about this game.

Think about this for a second. This is Vermont.

Vermont just beat Syracuse led by a Vermont native
(Taylor Coppenrath) who had to redshirt; a tough point guard
(T.J. Sorrentine) from Pawtucket, R.I., who couldn't get in-state schools to give him a look; a Cameroonian (Germain Mopa Njila) who had to learn the game in the United States; and a headband-wearing, fun-loving shooter from Ontario (David Hehn). Throw in a sophomore from the Czech Republic (Martin Klimes) and a handful of seniors and that's essentially your squad.

"This could never, ever be duplicated here," Brennan said in the locker room, sweat dripping down his forehead, the words still flowing out of his mouth in rapid succession as if a late-night band was ready to hit the drums after each one-liner.

"We live in a state where there are no stars, the governor doesn't live in a mansion, he doesn't have a limo," said Brennan, who according to a Vermont spokesperson will be only the third person ever to have Ben & Jerry's name an ice cream after him, calling it Tom Brennan's Retiremint (Jerry Garcia's Cherry Garcia and Phish Food are the others).

"You can't steal because the state is too small because everybody is watching. We've got a star over there (Coppenrath) who is a typical Vermonter and he's a star, but he handles it the right way. We have a solid mid-major program and that's all we ever wanted to do," Brennan said.

"Excuse me, I've got to take the call from the senator.  Yes, sir. Oh man, is this great or what? What a great, great day for Vermont. Hey, Senator Leahy bet with Hillary Clinton," Brennan remarked, drawing euphoric laughter in the locker room. "Oh, you enjoy it, my friend. We're always trying to make you proud. Thank you, sir, appreciate the call.'"

Brennan hung up the cell phone and said, "The senator loves me."

What was the bet?

"Who cares? A hot dog against some maple syrup," Brennan said.

How is this for some history -- this was Vermont's first NCAA Tournament victory in only its third appearance ... in 105 years of basketball.

This win was built over the past three years when Brennan took his act on the road to play at UCLA, Kansas and North Carolina.

"Those games were actually for me," Brennan laughed. "I wanted to coach at Pauley [Pavilion] and coach at Allen Fieldhouse." 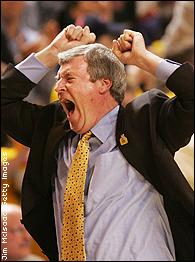 But the games that really created this win could be traced back to playing Arizona in the first round two years ago in Salt Lake City as a No. 16 seed and then playing Connecticut last year as a No. 15 seed in Buffalo.

Assistant coach Pat Filien said after Friday's game that Sorrentine sat in the locker room after the loss to the Huskies last year and said, "We're going to win a first-round game."

"We believed we could win this game, we always did," Hehn said. "We've got older guys and that's why we could do this. We said if we could win one, we could win two. We're definitely going to the Sweet 16. That's what we believe."

Michigan State is up next on Sunday.

"We've never been here before but we've got nothing to lose," Coppenrath said. "I was just hoping for an NCAA win and now we got one and the ride is still going."

And guess who is driving the bus for another few days?

Brennan. Who else but Brennan?

"We're playing with house money now. We'll be nice and loose on Sunday," Brennan said. "Oh, I shouldn't say house money in the NCAA Tournament ... if we get one on Sunday, we'll get ready for Duke next week. That would be neat, wouldn't it?"