This essentially is Bruce Pearl's Sweet 16, and everyone else is just living in it for a few days.

We've got the Elaine-like dance routine (obligatory "Seinfeld" reference) from Pearl as a one-time mascot circa 1981 that CBS will continue to show throughout the week. We're just as guilty of that sin here at the Worldwide Leader.

And the stories are already out rekindling those glory times when Pearl, the Wisconsin-Milwaukee coach, was an assistant at Iowa and turned in Illinois on a recruiting violation after taping the conversations of former recruit Deon Thomas. That's sure to be a juicy topic for Wisconsin-Milwaukee before it plays Illinois in Chicago on Thursday.

This is just a good guess, but we doubt that former Illinois assistant and current Illinois-Chicago coach Jimmy Collins and former Illinois and New Mexico State head coach Lou Henson will be sitting behind Pearl's bench.

The Panthers are the tournament's lone remaining Cinderella, but that's only by the true definition. They are a 12-seed, the lowest remaining in the event. They're also from the "mid-major" Horizon League. And they get to have the name of their school's city attached to them throughout the tournament. Wisconsin is also in the Sweet 16, and technically it's UW-Madison, but you won't see "Madison" on the jerseys like the "Milwaukee" that adorns the Panthers' clothing.

Pearl's arrival on the national scene gives the Sweet 16 some gossip for a few days. And while his 15 minutes get extended, there are overwhelming odds that the Panthers' run of upsets ends against Illinois.

So, if that's the case and this is only a story until Thursday, what else do we have here?

(Thankfully, no more of singer Nick Lachey, the Cincinnati fan whose 15 minutes of fame in this tournament are over. Sorry, Bearcats, but too much Lachey was becoming a detriment to your Sweet 16 candidacy.)

The story lines beyond Pearl:

Return of The General

Bob Knight is back in Albuquerque, in the Sweet 16 and on the sport's stage for at least another week and maybe longer. The last time Knight was in Albuquerque for an NCAA Tournament game was in 1992, when local sportscaster Henry Tafoya asked Knight about a "game face."

The contorted faces of Knight followed, and the clip from that news conference remains among his most famous. This was the same weekend when Knight brought out the whip at the news conference.

But that was the old Knight. This new Knight, still witty, has actually mellowed. His son, Pat, said this is his father's best coaching job because he has motivated this team better than some of his more talented squads. It's hard to argue. The wins over UCLA and Gonzaga were about as selfless a pair by a team as we've seen recently.

The entertainment value of Knight shouldn't be overplayed, because he would probably tell you that his team has been a joy to coach. The Raiders are a selfless group that continues to amaze those within the program.

Knight has a legit shot to play for the Final Four on Saturday, but he's going against one of the other top stories in this field...

West Virginia is here, too, after one of the best runs recently from a bubble team.

The Mountaineers climbed through the Big East tournament all the way to the title game, beating Boston College and Villanova before a loss to Syracuse.
In the NCAAs, they beat Creighton on a game-ending dunk and then took down (gulp!) Wake Forest in double-OT in the second round (apparently Wake was ESPN.com's pick to win the title but we can't remember that to be true ... did that really happen?).

West Virginia coach John Beilein has long been considered one of the top coaches in the country but rarely has been given his due as he moved from Canisius to Richmond to West Virginia.

He's winning with a St. Bonaventure transfer (Mike Gansey), one from Northwestern State (D'or Fischer) and everybody's favorite Pittsnogle (Kevin Pittsnogle). You've got to have a Pittsnogle to go far in the tournament, especially when he's got range from 17 feet out and stands 6-10.

Utah is here, too, and that's one heckuva story.

Utah coach Ray Giacoletti had to replace Rick Majerus and the annual success he had in the NCAA Tournament. Sure, Majerus/Kerry Rupp (interim replacement) left him the ESPN.com player of the year, Andrew Bogut. But he still had to coach him and put together a collection of role players around him.

Giacoletti has been one of the unsung coaches in the country and is proving yet again that the Big Sky is every bit as good a proving ground for top coaches as any other league in the country (see: Ben Howland came from Northern Arizona to Pittsburgh to UCLA while Giacoletti was at Eastern Washington – and don't get us started going back on the Montana tree).

Utah beat UTEP and Oklahoma by going to Bogut in one game and playing off of him in another.

The Wolfpack have a chip on their shoulder the land size of the Research Triangle for never getting the respect that they ball in Raleigh like they do in Chapel Hill and Durham. Mr. Herb Sendek, the professor who gets wronged seemingly every year, is still standing and is coaching one of the last three remaining ACC teams (along with -- guess who? -- North Carolina and Duke).

Who else crashed the party?

Well, the other 11 were actually expected to be present – either before the brackets were announced or at least after the first-round results, save one exception (hint: from Philadelphia). 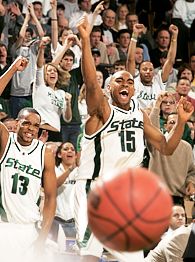 Illinois  This event is the Illini's to lose.

North Carolina  The most impressive of any team so far.

Washington  The fourth No. 1 is looking just as good as the first.

Oklahoma State  Sweated for a bit against Southern Illinois but not overly scared.

Arizona  The poor first half against Utah State is out of its system, and this team has the moxie to make a Final Four run.

Michigan State  Beating a No. 12 and No. 13 seed might not scream, "We'll meet you in St. Louis," but the Spartans are still finding ways to win, and they look formidable.

Kentucky  The Wildcats haven't been impressive in beating Eastern Kentucky and Cincinnati, but last we checked they still found a way to win.

Wisconsin  The Badgers beat Northern Iowa and Bucknell. All they need to say is that they made the Sweet 16, because no one will remember who they played. Going against NC State for a trip to the regional final makes the Badgers a Final Four contender a year after losing Devin Harris.

Villanova The Wildcats were methodical in beating Florida on Sunday. Florida probably was favored in this spot after its SEC tournament title, but anyone who witnessed the Wildcats in the Big East or against Kansas knew they had a shot for a deep NCAA run. If Curtis Sumpter is healthy (knee injury on Sunday), the Wildcats have a shot to beat the Tar Heels.

Five things we want to see this week:
• No. 1 Washington vs. No. 4 Louisville  Albuquerque Region, Thursday
Could be a wild affair.

• No. 2 Oklahoma State vs. No. 3 Arizona  Chicago Region, Thursday
Two teams capable of winning the title must play two rounds too soon.

• No. 1 North Carolina vs. No. 5 Villanova  Syracuse Region, Friday
The Wildcats will match the Tar Heels in intensity, passion and, possibly, poise.

• Whether Illini fans really will taunt Pearl  or is this story finally over?