ALBUQUERQUE, N.M.  Mike Gansey was one of the first West Virginia players to enter the Sheraton Old Town on Tuesday evening, his face beaming with pride and raw emotion.

Gansey had never been to Albuquerque and couldn't absorb enough of the moment.

"I'm still trying to soak up getting to the Big East tournament final, our 10-0 start to the year, and now this [beating Creighton and Wake Forest]," said Gansey, fresh off his career-high 29-point game in the second round against Wake Forest. Nineteen of the 29 came in the two overtimes. "It's hard to put into words."

Here he was, about to play in the Sweet 16, two years removed from one of the more sordid scandals in college basketball in the last five years.

Life throws plenty of twists, but for a college basketball player, getting a second chance like this one is rare.

Gansey was part of the 2002-03 St. Bonaventure basketball team  a voting member of the team  that decided to quit on the final two games of the regular season while the university was handling an investigation into the eligibility of teammate Jamil Terrell.

The university had already said the Bonnies couldn't play in the Atlantic 10 tournament, let alone the postseason. So the team decided it wouldn't finish out the year. The mutiny ultimately cost coach Jan van Breda Kolff his job, but it also was resoundingly condemned nationally.

Gansey said he still talks to his former teammates, and he said there are no regrets even though "we took a lot of flak for it."

"It's hard to believe that with everything that has happened with that scandal that I'm here in the Sweet 16," Gansey said. "All I wanted to do was compete and get some playing time. I never thought it was going to be like this."

But would Gansey be labeled a quitter? Not at all, because the coaches that wanted him saw just the opposite  a winner simply caught in an awkward situation. 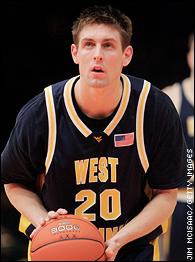 Ironically, the two schools that recruited Gansey out of St. Bonaventure, once it was known he was leaving, were New Mexico and West Virginia. The Lobos were involved because Ritchie McKay had initially recruited Gansey out of the Cleveland area for Oregon State. When McKay went to New Mexico, he tried to follow through with Gansey once he made himself available. But the strongest pull was to go with West Virginia coach John Beilein. Why? Beilein had fawned over Gansey when Beilein was coaching Richmond in the A-10.

Beilein would watch tape of the Bonnies, stop it and tell his coaches that they needed a player like Gansey to win.

"He fit the typical profile of a player we wanted at West Virginia," Beilein said. "We knew he wasn't a quitter. He's been good from day one."

During his redshirt season, Gansey worked out on the scout team. Beilein regrets that he didn't have him learn the offense and defense.

Beilein's intricate offense that involves lots of movement and requires reads off of curls and screens is tough to learn. Gansey said he still doesn't remember all the plays that, according to him, number in the hundreds and include names like "Dirty Harry." The Mountaineers' 1-3-1 zone defense, which Gansey anchors at the top, isn't as difficult to figure out, but still the reps are needed.

Beilein said it usually takes a newcomer at least a year to get used to the system.

"I still mess it up," said Gansey, who has one more season of eligibility remaining. "The reason the defense is so tough is that few teams see it, so it's hard to prepare for it."

Offensively, Gansey was pretty limited prior to arriving in Morgantown. The 6-4 junior described himself as simply a catch-and-shoot player with the Bonnies, where he averaged 13.9 points and shot 40 percent on 3-pointers. Now, he can put the ball on the floor and drive. Beilein said he's also forcing Tyrone Sally to run the fast-break lanes harder.

"They both run at the same speed, but Tyrone has to be equal with him," Beilein said. "All kids want to run, but do they have the heart and the legs? It's hard to play defense for 25 seconds and then run like that."

Gansey, the team's second-leading scorer (12.1 ppg) and leading rebounder (5.3 rpg), had no issues running the floor against Wake Forest. The Mountaineers weren't supposed to get into a running game with the Demon Deacons. But they weren't expected to score 111 points, either.

Beilein said his now-famous quote in his pregame speech last Saturday in Cleveland was that the Mountaineers couldn't win if the game was in the 70s and 80s.

Guess he was wrong, although for awhile he looked pretty prescient.

"Chris Paul was the quickest person I've ever played against, and I would have picked Wake Forest to win the whole thing since they were such a balanced team, beating North Carolina and Duke," Gansey said. "At halftime of our game with Wake, I didn't think we could beat them, since we were down 13. We couldn't stop Chris Paul or Eric Williams, but we never quit."

No, they didn't. Neither did Gansey. He was still running full stride at the end of the second overtime.

So, here he is, about to play Texas Tech for the chance to be in the Elite Eight and play for the Final Four. How did he and West Virginia get here so fast?

"It's such a blur," Beilein said. "We could have been done against Creighton [a dunk won it for West Virginia in the final seconds] and Wake Forest. But we weren't. These guys keep playing hard."

And they don't quit, none of them, not even the one from St. Bonaventure. That was in the past, a heated decision that clearly didn't have a lasting effect on this former Bonnies player.

Gansey couldn't be further from that chapter of his life, especially being here, in Albuquerque, in the Sweet 16.