Big men are hard to find these days in college basketball.

Look around the bracket and you'll be hard-pressed to find more than a handful of qualified bigs. Heck, look at the left side of the Final Four and you'll see two teams whose post "presences" are more secondary options forced to get their own offense off the glass.

The Spartans' Paul Davis is a very capable (if inconsistent) presence inside. He proved his mettle twice this season against Duke's imposing Shelden Williams, notching 17 and 10 in a seven-point loss at Cameron in November and then 20 and 12 in the Spartans' upset win in the Sweet 16.

The hitch? The last two games (including his 15-point performance against Kentucky in the regional finals) were Davis' first with more than 14 points in his last 16 games.

Even so, Davis gives Michigan State an advantage in the post against almost any team in the draw. Unfortunately, North Carolina is not one of them.

Tar Heels stalwart Sean May has been the most dominant big man in the nation down the stretch of the season and in the NCAA Tournament. May averaged 17.1 points and 10.9 rebounds per game this season and he has 14 double-doubles in his last 19 games, including a huge 29 and 12 against Wisconsin that helped push the Tar Heels to St. Louis. 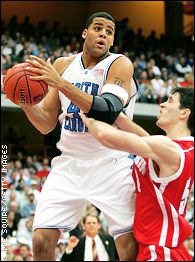 Davis will have his work cut out for him on Saturday at the Edward Jones Dome. If the Heels advance, Illinois' James Augustine or Louisville's Ellis Myles and Otis George will have their hands full when they try to tackle (literally, perhaps) May in the title game.

What makes May so tough? Unlike the Spartans, who don't always run their offense through Davis in the post, and Louisville and Illinois, whose offense is almost strictly perimeter initiated, North Carolina does try to get May touches on every possession in the halfcourt. May also gets a lot of early touches because of his ability to beat his man down the floor.

"He's running the court so well," Miami head coach Frank Haith said. "He gets back in the post so fast that he gets his early post move. He gets layups in the paint. You've got to stop his early post moves or else you won't stop him. He's got great hands and has a wide body. He's what we call a wedger -- by creating space, he wedges people out."

Haith said May's quickness to the lane is what catches opposing big men off balance. While big men like West Virginia's Kevin Pittsnogle can be a matchup problem because of 3-point shooting, May is even more of an imposing presence because of his ability to score in and pass out of the post.

"College basketball is much more like Illinois and Louisville in the post," Haith said. "They don't have a dominant big man. The ACC had three of them in May, (Duke's) Shelden Williams and (Wake Forest's) Eric Williams. The majority of college basketball has what Illinois and Louisville have in the post. Michigan State has one but surround him with a bunch of 6-5 guys."

Wake Forest coach Skip Prosser, whose Demon Deacons lost to Illinois in the ACC-Big Ten Challenge and beat North Carolina in their one meeting this season, sees May as a differentiator.

"When you've got a low-block presence, you have foul pressure on the opposition," Prosser said. "If you throw it to him, they have to guard him, stop him or foul him. That would put foul pressure on Davis, Augustine or (anyone at) Louisville. That's an advantage for Carolina."

Prosser's strategy against Carolina was to take away May and Raymond Felton's penetration ability and challenge the Heels to beat them from the perimeter. The result: Rashad McCants was crippled by foul trouble and May had his only single-digit game (nine points) in the ACC.

"We felt we couldn't do both -- guard him in the low post and guard the shooters in the halfcourt," Prosser said. "It worked for us but maybe it wouldn't for everyone."

There's a reason it worked for Wake -- the Deacons had beefy Eric Williams to guard May in the post with Chris Ellis, Vytas Danelius and Kyle Visser there for support.

The other three teams this weekend might not have that luxury.