Steve Alford's phone has been ringing quite a bit this week. He's not saying from whom. 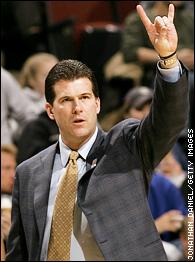 The word is that Alford knows all about the Final Four. He should. He's the lone coach to play all four teams this season.

The results? Iowa went 2-4 against the Final Four.

The Hawkeyes beat Louisville 76-71 in their second game of the season at the Maui Invitational before losing to North Carolina 106-92 two nights later in the event's final (after beating Texas in the semis).

In Big Ten play, Iowa lost to Illinois 73-68 in Champaign on Jan. 20 when the Hawkeyes still had Pierre Pierce. After Pierce was dismissed from the team for his alleged role in an altercation with a former girlfriend, the Hawkeyes then lost to Michigan State 75-64 and to Illinois 75-65, this time at home.

The Hawkeyes did beat Michigan State 71-69 in the Big Ten tournament quarterfinals in Chicago, a win that essentially put Iowa into the NCAA Tournament.

We're fairly certain, with six games total against the four teams, that Alford qualifies as a capable scout.

Click on the links for his take on each Final Four team: