You know the names of this year's Final Four coaches, but do you really know them? Here's a quick look at what each has done and what each is trying to do in St. Louis.

Rick Pitino, Louisville
Résumé: Appearing in fifth Final Four with third program (only coach ever to do that). Has one national title (1996 with Kentucky). Has the third-highest NCAA Tournament winning percentage of active coaches (10 or more games) at .750 (31-9).

Mentor: Jim Boeheim wouldn't be a bad answer. Pitino was a Boeheim assistant at Syracuse as a young lad and learned the 2-3 zone he's using this season under him. Pitino, though, seems to talk more often about learning under Hubie Brown with the Knicks. Brown seems to have as much influence over Pitino's thinking as anyone else. Regardless where he was, Pitino was always a student of the game. It seems as though he was never the second one in command, instead always carrying the role as the leader in the group. 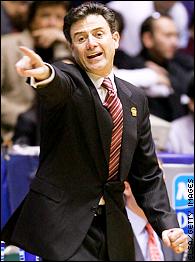 Style of play: Pitino started out as a pressing and trapping coach who loved the 3-point shot, once that became in vogue. But Pitino can adapt. He has gone physical with this group and doesn't hesitate to use the zone. That's something he wouldn't have leaned on in his Kentucky years. This is a changed Pitino in every sense of the word. He's willing to adapt to any situation.

Pressure point: Not much at all. Sure, Pitino feels the heat to perform at a high level. But he's not aching for a title. He didn't think he would be here with this group, and he doesn't feel that he must win a title to satisfy the masses in Louisville. Pitino has his title as well as Final Four berths at two previous schools. If he wins one in Louisville in year four, he'll be King of the Commonwealth again, a title he probably held anyway in absentia.

Legacy: Pitino will go down as one of the greatest coaches in the game. He might not have the overall record to match other Hall of Fame coaches, but that's because of his run to the NBA. Pitino took three college programs and turned them all into winners. Kentucky had the best tradition, but he came at a time when the program was rocked by a scandal. He will be forever remembered for turning around the Wildcats when they needed it most. He's doing similar work, save the scandal part, at Louisville. Pitino could take over Seton Hall, Baylor or Penn State and he'd probably turn those programs into winners faster than anyone else.

Mentor: This one is easy -- it's Gene Keady. Weber worked for Keady for 19 years as an assistant at Purdue. He learned how to coach, react to any situation and understand the Big Ten landscape under Keady. Weber isn't as vocal as Keady, but he's just as demanding. Weber's tough love to get the Illini players to follow his lead the past year was something he learned from his time at Purdue. Weber is extremely loyal to Keady, and he would have been his replacement had a deal similar to Matt Painter's coach-in-waiting plan been worked out a year earlier. 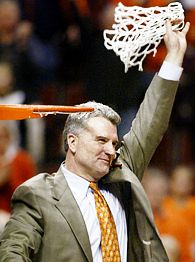 Style of play: Weber loves to run. He has the team to do it, too, at Illinois. Weber learned the toughness aspect of the game at Purdue. But he has opened up his game at Southern Illinois and Illinois. He adapts well to his personnel and doesn't hesitate to allow his players the freedom to move. He won't hesitate to work around their strengths, as we've seen with this group. They'll shoot 3s, and pride themselves on defending the perimeter and hawking the ball. The Illini have thrived under Weber's style this season.

Pressure point: It's hard to put too much on a man who just lost his mother. Sure, the window of opportunity is now or never for this group. Luther Head is a senior, and Deron Williams is expected to jump to the NBA. No one would be shocked if Dee Brown left, either. But Weber won't be looked at as any less of a coach if he doesn't win this weekend. The pressure was on getting to the Final Four with this group. The Illini had such a wonderful season -- it would have been a shame if they couldn't have finished the year in St. Louis. Winning the title would be gravy at this point.

Legacy: Weber will go down as doing one of the best one-season coaching jobs in recent memory. He has work to do to ensure he's regarded as one of the top coaches, but he has handled this season as well as anyone on record. The intense pressure of being an undefeated team shouldn't go unnoticed. Weber had to deal with egos and changing roles throughout the past year. He managed his big stars with perfection. There was a bumpy start a year ago, especially with the big three, but he got through it and this team is performing as one.

Tom Izzo, Michigan State
Résumé: Appearing in fourth Final Four with Michigan State (all in past seven years). Has one national title (2000). Has the highest NCAA Tournament winning percentage of active coaches (10 or more games) at .789 (23-6).

Mentor: Izzo was and always will be a Jud Heathcote disciple. Izzo was Heathcote's assistant and handpicked successor. The succession plan worked to perfection for Izzo and the school. Izzo speaks often and fondly about "Jud," and references him time and time again. Izzo learned toughness and physical play from Heathcote. He also was inspired by his coaching style and wit. Heathcote has become a Gonzaga fan in his later years and travels with the Zags in the postseason. But he'll surely be back with his No. 1 student this weekend, watching Izzo coach in yet another Final Four. 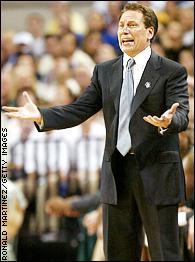 Style of play: Gritty. Go to a Michigan State practice and watch the style of play. Izzo teams have to play hard, and we mean really hard, to pass his test. Izzo demands accountability on every possession. He wants floor burns if the ball is on the floor and body blows if the ball is in the air. He practices with a purpose to ensure that his players aren't fearful of any contact. But don't think he doesn't like to run. This Michigan State team gets out on the break as well as any in the Big Ten. Izzo does adapt by allowing freedom for his players. But at his core, he needs his players to defend and rebound. If they do that, they can earn the freedom to play freely on the perimeter and on the break.

Pressure point: None. Izzo doesn't need to win the national title to validate anything. The pressure was more on the senior class to get to the Final Four after feeling the heat of not reaching a Final Four the previous three seasons. Izzo is here once again, and if he wins, he'll enter an elite class of coaches to win twice. He should already be considered elite after reaching four Final Fours in seven seasons. He seems so relaxed and at ease with this team in the Final Four. It's hard to imagine he's feeling any self-imposed heat on this trip.

Legacy: Izzo should go down as one of the greatest coaches in the modern era. He has put together Hall of Fame credentials in the past 10 years, making Michigan State one of the elite programs on par with any in the country. But the best part about Izzo is that he hasn't changed. He's the same man, from making the NIT early in his career to making yet another Final Four this season. He takes the time for everyone and never, and we repeat never, big-times anyone. He is a pleasure to deal with and an honest and gentle soul. He is simply one of the best.

Mentor: Dean Smith. Williams waxes poetic about Smith -- and rightfully so. Smith gave him his shot at coaching, and Williams was a trusted aide to Smith throughout his tenure as an assistant. He still refers to him as "Coach" any time he sees him. A few years ago at a coaching clinic where Williams was as much the headliner as Smith, Williams made sure he held Smith's jacket and ushered him through an autograph line at the Mohegan Sun. He was Smith's buffer to the crowd. He learned how to coach from Smith. He learned a lot more about life from Smith, too, and that has made him grow as a person, as well. 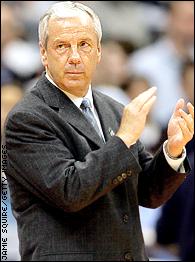 Style of play: There isn't a better coach at teaching and coaching the fast break than Williams. His teams have been the best at getting out and running after a rebound or basket at Kansas and North Carolina. He recruits players to fit this style and maximizes their ability on the break. His teams have always been some of the best to watch offensively. If you play for Williams, then you'd better be in shape. Case in point: Sean May. He's gotten his weight down and toned up so he could run for Williams. As a result, May has made himself into a player of the year candidate and earned himself plenty of coin in the NBA whenever he decides to declare.

Pressure point: Everyone assumes Williams is feeling the heat to win a title. He continues to state over and over again that he has as much passion for North Carolina in his pinkie as any Carolina fan has in his or her entire body. He wants to win a title badly, but he doesn't need to win one to show he's one of the best coaches in the country. His best team, in 1997, didn't even make the Final Four. This team did, and he has done a masterful job at massaging the egos to ensure that this team didn't slip on the way to St. Louis. Sure, as with Weber, the window is closing with this group for the seniors (Jawad Williams, Jackie Manuel and Melvin Scott) and there could be defections to the NBA (perhaps May, Rashad McCants, Raymond Felton and/or Marvin Williams), but Williams will be back here again even if this team is broken up too soon.

Legacy: Williams will go down as one of the best offensive coaches in the game. He has a Hall of Fame pedigree. If he doesn't win a title, that certainly will be an asterisk that gets tagged next to him, but unlike other legendary coaches, such as Gene Keady and John Chaney, he has been to the Final Four (a number of times). Williams is an emotional coach who pours his passion into every aspect of this profession. Few coaches are as driven in recruiting as he is on the road. His work ethic will be one of his most lasting legacies. He is the starter, the middle reliever and the closer on recruiting, always trying to outwork other coaches. His record speaks for itself, and one day, possibly Monday, he will get his title.