ST. LOUIS  Clockwork Orange had stopped ticking. Indomitable Illinois, 37-1, had ground down against a superior opponent, and was on the verge of being run out of a national championship game it felt destined to win.

It was ugly, but you knew it wasn't over. Not with this team. It had come too far and lost too stubbornly not to die with its boots on in the final duel. 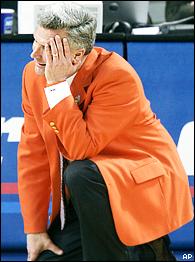 Down 15 in the second half? Not a problem. Illinois had made an identical deficit evaporate in less than four minutes against Arizona in the regional final.

But this wasn't Arizona. This was North Carolina, possessing superior talent and seemingly every means necessary to defeat  if not stomp  the Illini.

"We just talked about going down fighting," coach Bruce Weber said. "This is a game they're going to remember the rest of their life. If you go down  the regret that you would have is if you didn't fight."

Illinois fought. Illinois scrapped and battled for rebounds and loose balls. And mostly, Illinois turned to its heart, the guard trio of Deron Williams, Dee Brown and Luther Head, and asked them for one more rally.

They responded. As you knew they would.

The Illini went down with a fusillade of 3-pointers  launching 40, hitting a dozen. That's their game  attacking from the perimeter, moving the ball one step faster than the defense, finding the open man for the open shot.

In the first half the shots wouldn't fall, but in the second half they rained down on the Tar Heels. And the rally was on.

No team had ever come back from a halftime deficit larger than 10 to win a national title game  but darned if the Illini didn't almost pull it off.

Early in the second half, they made seven straight shots and scored on eight straight possessions  the guards accounting for all 21 points in that spree. That cut the lead to three and had an orange-heavy Edward Jones Dome roaring.

After Sean May helped Carolina push the lead back up to 10 with 8:51 to play, Illinois regrouped and nipped at the Heels again. The guards did the work once more, augmented by a heroic off-the-bench performance by senior big man Jack Ingram, who picked up the slack left by James Augustine's disastrous, nine-minute, no-point, foul-out performance.

When Brown made two free throws at the 5:34 mark to tie the game for the first time since 9-9, the Dome sounded like Illinois' Assembly Hall. And when Head made a 3 with 2:36 left to tie it again at 70, it got even louder.

But that was it. Illinois could never get over the hump, never get the lead, never get the final, fateful shots to drop. A team that had pummeled all of America with the outside shot missed its final five shots (all 3s, two by Williams and three by Head) and had one crucial turnover by Head  its only turnover of the second half.

"We had shots," Weber said. "We had open shots. But our kids played themselves to exhaustion. You shoot all those 3s, you maybe don't have the legs at the end. If one of those goes, now the pressure's on them.

"Somebody said we had three chances to take the lead. We just never got it done."

Down 73-70, Illinois ran Head off a double-screen to the right wing and Williams delivered the ball, on time and on target. Head got a beautiful look at the tying shot with about a dozen seconds left, but the ball thudded off the back of the rim and Raymond Felton collected the rebound.

"I was wide open," Head said. "Coach ran a great play. Got me open, had a great look. Just missed it."